KYLE BUSCH
Martinsville: Not as Spooky as it Used to Be 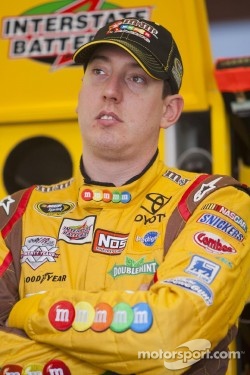 HUNTERSVILLE, N.C. (Oct. 25, 2011) – It’s almost time for Halloween and, for Kyle Busch, there are memories of a time when not many things were spookier than having to make one of his semiannual visits to Martinsville (Va.) Speedway.

That’s because, during a three-race stretch starting in the spring of 2008, the Joe Gibbs Racing (JGR) driver who will sport a special M&M’s Halloween Fun Packs paint scheme this weekend never finished better than 24th at the .526-mile paperclip. But Busch’s fortunes at Martinsville began to turn around with a solid fourth-place finish in the fall of 2009.

Then, enter crew chief Dave Rogers in March of 2010. During his first full season under Rogers’ guidance, Busch was running in second place when a late-race caution forced a decision by the No. 18 team to pit late in the race, costing precious track position. On the ensuing restart, the Las Vegas native made contact with Paul Menard and was ultimately forced to settle for a 22nd-place finish. Although it was a hugely disappointing end to the weekend, Busch and Rogers left with the feeling they were capable of winning at Martinsville and backed it up with a solid fourth-place run last October.

In his next trip to the tricky Virginia short track this past March, Busch led a race-high 151 laps before scoring his career-best Martinsville finish of third. Indeed, Busch feels like the M&M’s team keeps getting closer and closer to that elusive win at Martinsville with each return. In all, Busch has recorded six top-10s in his 13 Sprint Cup starts there, including the aforementioned career-best top-three this past March.

Of the 23 venues that will host Sprint Cup events in 2011, Busch has won at least once at 20 of those venues in one of NASCAR’s top three divisions – Sprint Cup, Nationwide, and Camping World Truck. There are only three current Sprint Cup tracks – Martinsville, Pocono (Pa.) Raceway, and Indianapolis Motor Speedway – where Busch has not scored a victory in any of NASCAR’s top three series.

So, will Halloween weekend turn out to be a trick, or a treat, for Busch at Martinsville on Sunday? Despite the lack of a grandfather clock – the famed first-place prize at Martinsville – Busch has plenty of reasons for optimism this weekend. Considering how he’s run at the .526-mile paperclip-shaped oval over his last four appearances, it might finally be time for those pesky tricks to turn to treats.

Are you still trying to figure out Martinsville, and are you comfortable racing there, now?

“I didn’t used to like Martinsville, but ever since I started working with Dave (Rogers, crew chief) we feel like we get better every time we go there and we’re getting close to finally winning one. I’ve had some decent runs there, where I’ve felt like we’ve had a car to win and had a shot to win. Unfortunately, we weren’t able to get the track position toward the end of the race. Jeff (Gordon) is so good there, and Jimmie (Johnson) and Denny (Hamlin) are also good there. They are probably the three most difficult guys to pass there because they know the place. They know how to get off the corner and how to roll the middle of the corner there. Everything is timing, and their stuff just works, whatever it is.”

What is it that makes Martinsville so different when it looks so similar to other short tracks?

“Every track is different. There aren’t two racetracks out there that are the same. Everybody says that Atlanta, Texas, Charlotte, those places are the same because they look the same from the sky. But they are so, so different. They say Chicago is the same as Kansas and (Las) Vegas, and those places are so different. California and Michigan, they’re so different. I would say that probably the closest racetrack that I grew up racing on was in San Bernardino, Calif. – it was Orange Show Speedway. That’s closest to what Martinsville is. I only ran Legends cars there, so it’s not a true telling. It was only a quarter-mile. It’s just a tough place because you’re so hard on brakes, but your minimum speed there – everybody’s is – the same, pretty much. Except, there are a couple of guys who will get a half-mile-an-hour faster through the center of the corner, and that is the difference between the pole speed and being dead last. You’re looking to find things that will make your car just that much faster there. You want to drive into the corner one foot deeper than that other guy. You want to step on the gas one foot sooner than that other guy and you want to roll a half-mile-an-hour better than that other guy. That’s why it’s so finicky and so hard there, because everybody runs so tight that, any little thing you can find, it can help a lot.”

How do you approach Martinsville, since track position is so important there?

“It’s just a short racetrack and you’ve got to try to have a good car. But it’s hard to have a good car there with the field as tight as it is. Qualifying up front seems to help out a little bit. We know who the guys are who are going to be tough there. Really, there’s nothing you can change about that racetrack to stay out of trouble. Basically, you can be leading the race and have a wreck in front of you while you are trying to lap some guys, and that could be it.”

Your racecar is sporting the special M&M’s Halloween paint scheme again this week. What was your favorite Halloween costume that you wore as a kid?

“Actually, one year I went as a Teenage Mutant Ninja Turtle. I think that was my favorite costume as a kid. I was Michelangelo and I even had the fake nunchuk. One year, I was a football player and, one year, I even dressed up as Jeff Gordon since he was my favorite racecar driver when I was a kid.”

Growing up in Las Vegas, what do you remember about Halloween and trick-or-treating?

“It was always cold in Las Vegas during Halloween, even though it can be really hot most of the year. I guess the biggest memory was going out to everyone’s house and trick-or-treating and hanging out with friends as a group. Sometimes, people wouldn’t be home, so they had a bucket out and you would reach in and grab whatever you wanted out of the bucket. It was all about how much candy you could collect, not necessarily about how much you would eat when you got home.”

What was your favorite kind of candy?

“Mainly, everyone always had the fun packs. Back then, which wasn’t that long ago, the fun size pack of M&M’s was always really popular, and I’m sure that hasn’t changed too much, even now.”

Ryan Newman looking for a win at Martinsville II