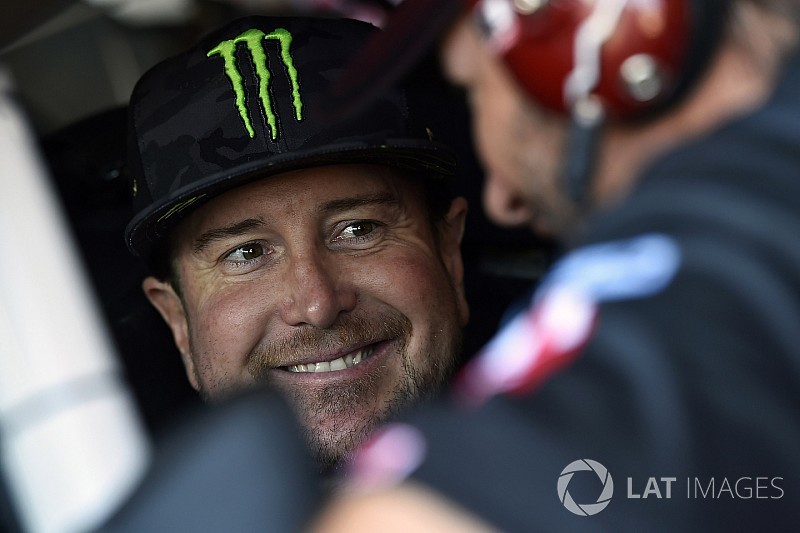 Kurt Busch is getting hot just when it counts — entering the Monster Energy Cup Series playoffs.

While Busch kicked off the 2017 season by winning the Daytona 500, the No. 41 Stewart-Haas Racing team hasn’t shown the consistent flashes of speed needed to contend with the Toyotas — until now.

“Our Fords are fast and now we’re finding this handling balance,” Busch said. “I’m really proud of everybody at SHR for working hard, knowing we were kind of going into unknown territory, but we got it switched over, and thanks to Doug Yates (engine builder), Haas Automation, Tony Stewart, Gene Haas, Monster Energy...

“We’re having a Monster time. We’re in the playoffs and now we’re going to go execute for these 10 weeks.”

No, the transition from Chevy to Ford Performance this season wasn’t executed as smoothly as the team had hoped. Following Busch’s victory, he didn’t score another top-five finish until Pocono — 13 races later. Kevin Harvick, the only other driver to deliver a trophy for SHR during the regular season, didn’t win until Race No. 16 at Sonoma.

Even as dominant as the Toyotas and Ganassi Racing’s Kyle Larson have been in 2017, the experience of SHR’s two champions offers the company solid shot at the title.

The off week between Bristol and Darlington offered the No. 41 team ample time to catch up. In the last three races, Busch has posted an average finish of fourth. Denny Hamlin is the only other driver to score three-straight top fives but his win at Darlington was encumbered.

“We poured everything in it after the off week and we did a lot of research to figure out where we were off a little bit,” Busch said. “I’m just happy with Ford and Monster Energy and with Haas – everybody at Stewart-Haas just pushing to find more.

“You can’t be complacent in this series. Anytime I look at a scoring pylon, there are usually a couple of Toyotas ahead of us, but that Larson kid is good. He won (at Richmond) and he got some more bonus points.”

Acquiring more bonus points is one area where Busch needs to pick up the pace. Currently, he’s 12th in the standings and 48 points behind regular season winner Martin Truex Jr. But Busch has wins at seven of the next 10 tracks on the schedule — including Homestead.

Last weekend he was encouraged by the team’s ability to improve the car throughout the race — a strength that will serve the crew well in the playoffs.

“We’re doing everything right on the 41 car, and we can do better in some categories,” Busch said. “Our long-run speed was really good (at Richmond). That last green-white-checker, I knew there was gonna be chaos. I had hoped we end up getting fourth out of it.

“We missed it on the setup early on, making the wrong changes, and then we backed it up and, to be honest with you, I think we ended up with what we unloaded with on Friday right in this car right now, so those are some good signs heading into the playoffs.”

Smithfield feels move to SHR will "improve our competitiveness"