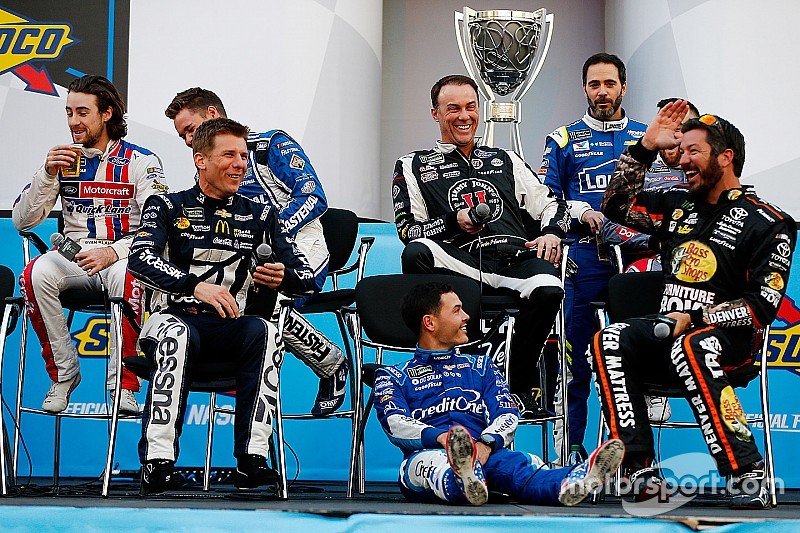 The 2014 NASCAR champion celebrated his 42nd birthday on Friday. As his fellow 40-somethings begin new chapters in their careers, Harvick will embark on his 18th season on the Cup tour when Speedweeks rolls around in February.

And as a senior statesman, Harvick is committed to shepherding the sport through whatever challenges may lie ahead.

“For me, I try to continue and push the things that are unique, that are not the norm and try to be a part of the conversation,” Harvick told motorsport.com. “I think if you’re part of the conversation about what you’re doing, where the sport is going, how your team is functioning, we have a pretty good pulse on sponsorship and the landscape of what the fans think. We’ve tried to step out of the box and do things that were out of my comfort zone. I think the radio show is a good example of that.”

Engaging with the fans through radio show

“Happy Hours,” Harvick’s weekly show on SiriusXM NASCAR Radio, opened his eyes to just how disconnected he was from some of his fans. The broadcast offered Harvick a platform to express his opinion, engage the listeners and share the special relationships he’s cultivated throughout his career with guest appearances. Harvick expanded his own fan base as callers were able to build an intimate rapport with one of the sport’s biggest stars.

“As you look at the future of the sport in general, it’s definitely a role that I enjoy—I really enjoy being a part of the different aspects that make our sport go around,” Harvick said. “I think it’s important to make everyone realize that it’s not just about you, it’s not just about your team, it’s really about the sport in general and keeping it healthy.

“I look forward to being a part of those roles as much as or as little as I have been, but I think there’s definitely a responsibility there to make sure you participate and give your opinion as much as you can, because I’ve been around it for a while. I don’t have any intentions of going anywhere.”

While the sport has endured its share of drama in the past, Harvick was relieved that competition remained in the spotlight all year—particularly in the postseason. Certainly, the introduction of stage racing stimulated the conversation and changed the complexion of the sport’s strategy. But as the Championship 4 advanced to the season finale at Homestead-Miami Speedway, there were really no surprises among the contenders.

“As you look as where the sport is in this particular year, I think the Playoffs itself, all the talk was about racing,” Harvick said. “We’ve had so many distractions in the past. I feel like we’ve gone through so much change with the cars and the formats and everything that we’ve done, I feel this is really the first year that really felt normal. Aside from Jimmie (Johnson) winning last year, I think the best cars at that particular point in the season won three out of the four years. Last year, they just all kind of wrecked each other and Jimmie was at the right place at the right time and capitalized on it.

“We’ve got a lot of good things going for us right now. We just need to keep the momentum going in that direction and not fall into the narrative of ‘TV ratings are down.’ TV is a wide-open world of who is turning what device on, who is using it and who is paying for what. It’s a wide-open landscape, and you’ve got to keep your eyes opened because things are going to change a lot.”

One of the few remaining drivers over the age of 40

Things have already changed in how the sport is consumed. But the driver landscape has changed as well. First it was Jeff Gordon transitioning out of the sport and into the TV booth. Tony Stewart retired from NASCAR competition to focus on open wheel racing. This year, Dale Earnhardt Jr., 43, and Matt Kenseth, 45, gave up their seats for the next generation.

Harvick and Johnson are the veterans that will guide the sport over the next several years in what could be the last contracts for both. Harvick could easily join the paths of Gordon and Earnhardt in a television analysts role if he chooses. Happy Hours is the perfect training ground should he take that next step.

But Harvick still has competitive years ahead of him. At 42, he hasn’t lost a step. Clearly, the transition from Chevrolet to Ford proved to be a challenge this year for Stewart-Haas Racing. The organization appeared to turn a corner in time for Harvick to make a run in the postseason, but neither he nor fellow Ford driver Brad Keselowski had cars that were capable of holding off the Toyotas of Kyle Busch and eventual series’ champion Martin Truex Jr.

“I think things progressed well as we went through the season,” Harvick said. “I don’t think we ever got to the point of getting everything to the point where everyone wanted it. As far as finding everything we could to find all the speed that we needed—we just ran out of races. But they did a great job and put a lot of effort into getting us where we were in the Playoffs and then progressing still through the Playoffs. It was a lot of work for everybody at SHR, but I think the off season is a good thing to let everybody take a deep breath and think about what we’re doing.

“It will change again next year with the Hawkeye System and the way that they’re going to inspect the cars, so it’s really more of the same. But for us, our engines will fit in the car. We won’t have to recreate suspension pieces—and you know there is really nothing from Chevrolet that will work on a Ford. So, we have a lot better foundation to start from than where we were. What we have in the future as far as Ford, I think Ford has done a great job and as you get to the end of the year we saw a lot of things that they are working on to try and help the teams. And they put a tremendous effort into the teams and the things that they need. It’s been a great relationship in year one and I don’t see it getting any worse.”

With wife DeLana expecting the couple’s second child in early 2018, Harvick expects to remain close to home in the off-season.

“We’ve kind of positioned everything to make sure we have time to properly prepare and put ourselves in a position to be ready for whenever she decides to come,” Harvick said. “That’s really the only priority. And (son) Keelan’s actually excited about it. That takes a lot of pressure off of DeLana and I to know that we don't have to work on him to convince him to make this work. He’s bought into the whole scenario. It’s going to fun. The main thing we have to figure out now, is the new flow of the house.”

Bass Pro Shops to continue support of RCR in 2018

Kurt Busch on SHR renewal: "I have everything I need to win races"