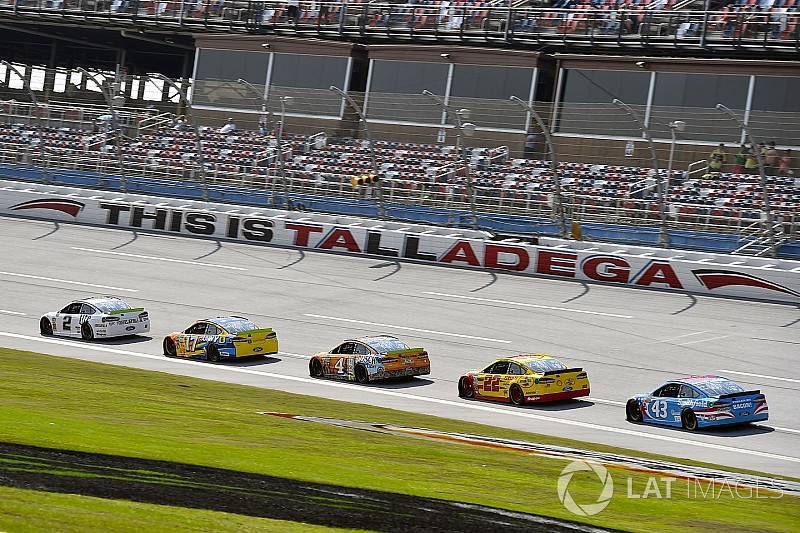 Brad Keselowski earned his sixth stage win of 2017 after a chaotic 55 laps at Talladega Superspeedway.

“You always want a little but more but I have enough to make the moves I need to make and make passes,” Keselowski said. “We’re off to a good start with our teammates and we have a good strategy.”

Dale Earnhardt Jr., led the field to green but Logano took the lead after the first lap.

Kurt Busch, Kevin Harvick, Mark Thompson and DJ Kennington started at the rear of the field for unapproved adjustments.

By the second lap, Logano held the point with Elliott on the outside and Earnhardt and Keselowski tucked in behind the No. 22 Ford. After the first five laps, Harvick moved to 20th with Kurt Busch in 23rd. Truex hung out at the back of the pack in 26th.

The Penske duo of Logano and Keselowski controlled the front of the pack. Earnhardt ran third followed by Stenhouse, Bowyer, Larson, Johnson, Blaney, Kahne, Bayne, Elliott and Harvick, who came from the rear of the field to 12th. A sixth-car breakaway pulled away from the pack two laps later with Logano at the point followed by Keselowski, Stenhouse, Bowyer, Larson and Kahne.

Earnhardt controlled the pack on the inside lane with his Hendrick Motorsports teammate Chase Elliott on the outside after 20 laps. Elliott took the lead at the start-finish line on Lap 21. Kenseth ran second followed by Earnhardt, Daniel Suarez, Larson, Truex, Kahne, McDowell, Hamlin and Menard. The Fords that pitted cycled out to 34-seconds behind the leader.

Half of the field was coming to pit on Lap 26, when Erik Jones ran into the back of Jamie McMurray coming out of Turn 4. McMurray, who was attempting to pit, slid sideways and Jeffrey Earnhardt t-boned the left side of the No. 1 Chevy.

"We wanted to pit a couple of laps earlier, and you’re somewhat dependent on the spotters to tell you when you’re going to pit," McMurray said. "You assume everyone is working as a group. It was my fault. I assumed that they said the 18 was going to let me in, so I thought we were all going to pit. I didn’t even know where the 77 was. When I got on the brakes, I thought we were all coming to pit road as a group. I’ll take the blame for that. I just kind of assumed we were coming to pit road right there. Obviously not everyone was.”

Mark Thompson tried to go high, but tagged McMurray as he spun.

“I sort of ran him over and caused a chain reaction,” Jones said. The No. 77 Furniture Row Racing team’s driver, crew chief Chris Gayle and spotter Rick Carelli were called to the NASCAR hauler after the incident.

"I tried to get out but it was too late when I saw them wrecking," Elliott said.

Elliott pitted again on Lap 33 before dropping to the rear of the field as did Earnhardt, Larson, Menard, McDowell, Austin Dillon and Ryan Newman.

In five laps, Elliott was back in the top 20. Larson ran 27th with Earnhardt behind him. On Lap 44, Stenhouse Jr. cleared Johnson on the front stretch to line up seventh with the Fords. He pulled out on the next lap and climbed to fifth on the outside lane with 10 circuits to determine the stage. Stenhouse pulled the slingshot move again on the front stretch for fourth, then got buried on Lap 48 as Johnson closed the gap.

Logano had control of the inside lane with teammates Keselowski and Blaney behind with five laps remaining — and a momentum growing on the outside lane with Johnson and Stenhouse. Johnson and Blaney made contact on the backstretch, then Menard slapped the wall in Turn 3 to bring out the second caution.

Earnhardt pitted with the Toyotas on Lap 52 and received a speeding penalty in Section 7. He was forced to drop to the rear of the field and restarted 34th.