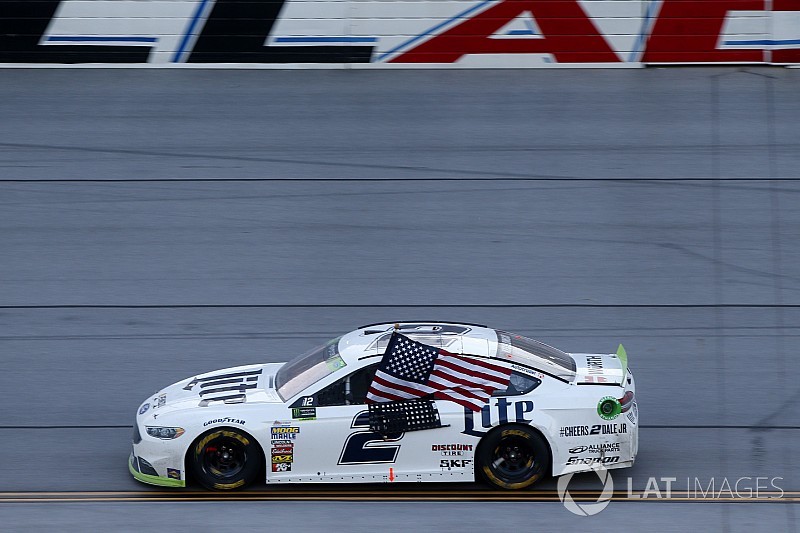 It was survival of the fittest for Brad Keselowski, who collected his fifth victory at Talladega Superspeedway on Sunday.

The driver of the No. 2 Miller Lite Ford made it a clean sweep by Ford Performance at restrictor plate races for the first time in the history of the manufacturer.

Keselowski beat Ryan Newman to the line by .210-seconds for his 24th-career Cup win.

“That takes some stress off of me for next week,” Keselowski said on his cool down lap. “I survived. What a special day. We were able to come here and get it done.”

Keselowski, who led three times for seven laps, also won the first stage in what became a slugfest with just 13 cars remaining on lead lap at the finish of the Alabama 500. With the win, Keselowski advances to the Round of 8.

Hamlin took the lead on Lap 117 followed by Blaney. Blaney returned to the point between Turns 3 and 4 on Lap 118 followed by Elliott, Hamlin, Keselowski and Truex. Larson moved up to sixth, Gaughan dropped to seventh followed by Kurt Busch, Johnson, McDowell and Earnhardt who worked the high lane to advance from 16th at the restart.

Crew chief Alan Gustafson tells spotter Eddie D’Hondt not to let anyone get to the outside of Elliott with 52 laps to go. With 50 laps remaining, Elliott led twice for 18 laps followed by Blaney, Earnhardt, Kurt Busch, Johnson, Logano, Kenseth and Truex. Hamlin closed in with the second line — Bayne, Stenhouse, Menard, Larson, Kyle Busch, Keselowski and Harvick.

Kyle Busch cycled out to the lead on Lap 145 and led four circuits before Logano took the point.

Logano led three laps before Bayne and Kurt Busch made contact in Turn 3 to trigger the sixth caution on Lap 151. Suarez checked up and Earnhardt pounded the rear of the No. 19 car. Harvick, Bowyer, Kenseth, Patrick, Kurt Busch, Bayne, Allmendinger, Austin Dillon and Almirola came in for service.

The race returned to green on Lap 171 with 18 laps remaining. Logano held the point until Suarez passed the No. 22 Ford at the line. Before completing the next lap, a 16-car wrecked erupted on the backstretch after contact between Truex and Ragan. Kurt Busch was collected along with Stenhouse, Harvick, Johnson, Earnhardt, Austin Dillon, Kyle Busch, Kenseth, Cassill, Gaughan, McDowell, Patrick and Ty Dillon.

NASCAR posted the red flag at the three-hour, 21-minute-mark with 16 laps remaining.

“I’m fine, I just didn’t know where the 48 car came from,” Kyle Busch said after being released from the infield care center. “Just never saw him coming. It was unfortunate to get caught up in that mess.”

Elliott came from fourth and slingshot around the Suarez and Logano for the lead followed by Larson on the first lap. As the field came down the backstretch into Turn 3, Logano slid into Bayne and bounced into Blaney and collected Harvick and Gaughan for the 11th caution.

Suarez led the remaining 16 cars to the green with eight laps to go. Elliott, Earnhardt, Larson, Hamlin, Keselowski, Kahne, Newman, Ty Dillon and Almirola completed the top 10. Larson moved to second on the inside but Suarez hung on for the lead. As the pack came through Turns 4, Elliott dropped to the middle and turned Suarez who clipped Larson. Keselowski escaped with the lead followed by Newman, Earnhardt Hamlin, Ty Dillon, Kahne, Almirola, Bayne, Gaulding, Ragan, Logano and Menard.

NASCAR displayed the red flag for the third time at the three-hour, 40-minute-mark with 13 cars left to battle. After 17-minutes and 14-seconds, the yellow flag waved and the remaining cars lined up for a three-lap shoot out.

Hamlin pushed Newman out to the lead but took the low lane after the first lap with Keselowski in second. Almirola climbed behind Keselowski with one lap to go. With a push from Logano, Keselowski extended his lead over Newman at the line.