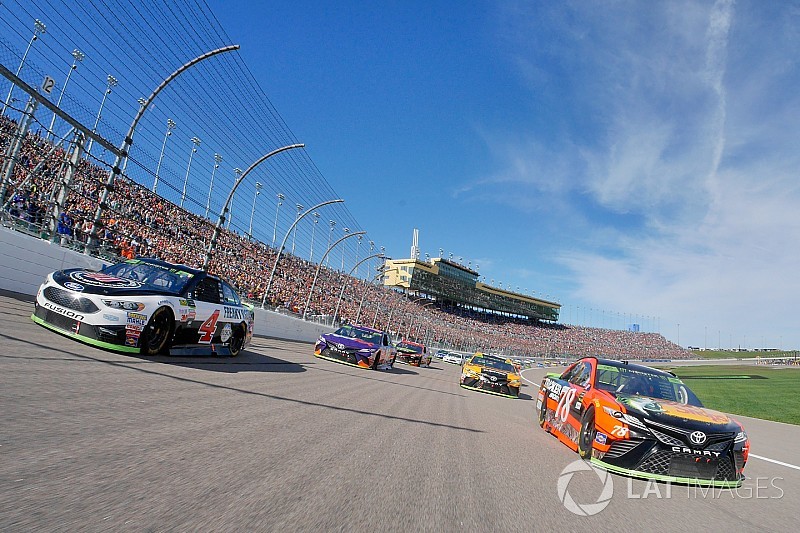 Certainly, Kyle Larson’s departure was the most shocking of all. Larson, 25, had a break-out year with four wins, three poles, 14 top-fives, 19 top 10s and four stage wins in the first 31 races. He was a champion contender all season long — until his engine expired after just 73 laps in the Hollywood Casino 400 on Sunday.

Larson finished 39th and missed transferring to the Round of 8 by nine points. He sits ninth in the standings.

Matt Kenseth was eliminated after NASCAR penalized the No. 20 Joe Gibbs Racing team for having seven pit crew members over the wall. Kenseth was collected in a 14-car wreck triggered by Erik Jones on Lap 198. After service, Kenseth pulled his car midway up pit road and waited for the red-flag to end. Moments later, crew chief Jason Ratcliff informed his driver the team had been disqualified.

“Someone has to tell me what the hell is going on,” Kenseth said over the radio. “You’re telling me we sent too many guys over the wall so I can’t race for a championship?”

Kenseth was scored 37th and is currently 10th in the standings, 52-points behind Larson.

Jamie McMurray took the brunt of Jones’ accident. When Jones overcorrected on the backstretch, he came across the nose of the No. 1 Chip Ganassi Racing Chevy first before bouncing up into the wall.

McMurray was running fifth at the time of the wreck — and had picked up 10 stage points in the first two stages.

“I didn’t think I was going to hit him and I didn’t have that much contact with him, but someone came through later on and got into me a little bit harder,” McMurray. “I had a really fast car. I thought we had one of the best cars, and I felt like if we could have gotten to the lead, I could have led the race for a while. It was a good Cessna Chevy. But we’ve had two bad races in a row and there’s nothing you can do about it.”

McMurray was 29-points out of eighth-place entering the weekend. He finished 34th and moved up to 11th, 98-points behind Larson.

Ricky Stenhouse Jr., started the race 24th and was never a factor. Hitting the wall twice in a span of two laps — first on Lap 173 — again on Lap 175 to draw the caution, took the driver of the No. 17 Fastenal Ford out of contention. Although Stenhouse soldiered on, he finally retired as the white flag flew and finished 29th. Stenhouse dropped to 15th in the standings.