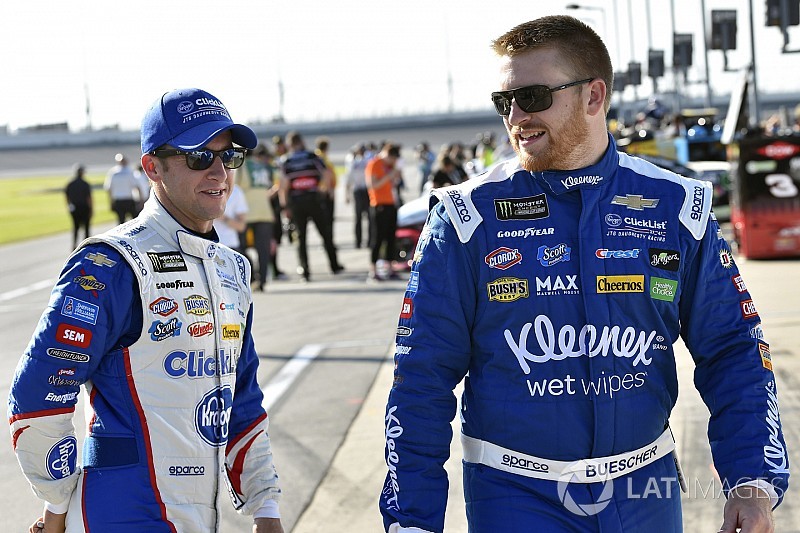 While many teams suffered damage and DNF’s in the multi-car incidents at Daytona, A.J. Allmendinger and Chris Buescher were able to make history for their JTG Daugherty Racing organization.

Several multi-car teams saw all of their entries taken out in wrecks in Saturday night’s Coke Zero 400 but JTG enjoyed its best combined performance in its team's ten-year history.

For the first time since becoming a two-car operation, both drivers finished inside the top-five in the same race.

“It was a wild night overall," Chris Buescher said after finishing fifth. "I'm just proud of everybody on our Kleenex Wet Wipes Camaro ZL1. We fought hard today and stayed out of trouble and were there at the end with our teammate AJ (Allmendinger).

“We got a good run on the outside, we were able to give (Erik) Jones a good shove down the back there and got him clear. We just couldn’t quite clear with him.”

A.J. Allmendinger, who equalled his career-best finish at Daytona of third, echoed Buescher’s comments about the race.

“You know, tonight was strange,” said Allmendinger. “(I) tried to ride at the back early on, and still got wrecked and had a lot of damage on the left rear of the race car, so my guys did a good job to fix it good enough. “Heck, I probably missed another seven wrecks after that. It was just kind of chaos out there.”

Buescher said he was happy with the performance of the entire team and added it couldn’t have come at a better time for his team.

“I'm proud of our operation and what we were able to accomplish,” said the Texas native. “I'm excited to head to Kroger's headquarters in Cincinnati (this) weekend at Kentucky Speedway with a great finish behind us.

“I wish we could have lined up and tried to get it, but that’s always easy to say after Daytona and it was a great day overall for our team and our organization.”

His fifth-place showing was the second of the season - which also came at Daytona in the 500 in February.

The podium finish was the first of the year for Allmendinger, but he also had a good finish in February at Daytona, finishing 10th.

Allmendinger can’t put his finger on why but he wasn’t surprised that he and Buescher always seem to run well at NASCAR’s most famous track.

“We've ‑‑ for whatever reason, we run well here,” he said. “My guys, they ‑‑ we really work hard on set-up and trying to get at least a good handling race car, especially in the Fourth of July race, and Daytona, the last, I think, four races, I've had a shot to win the race.

“With that damage on the left side of the race car, it put a lot of drag in it, so I didn't really know if we had a great shot to win it. You know, I mean, it was a solid night. It's one of those nights where you've just got to survive. It's not pretty. I think that was a lot of crazy racing, but we survived.”