If Johnson is feeling the playoff pressure, it doesn't show 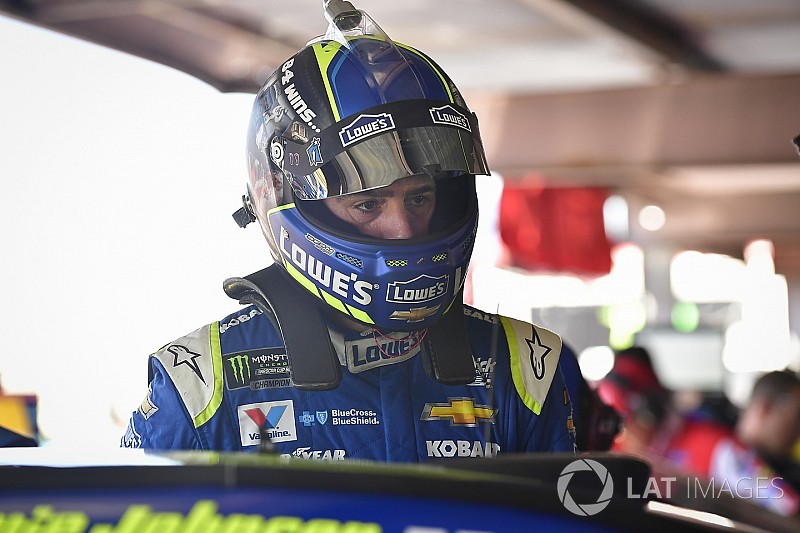 Jimmie Johnson didn’t have to worry about his performance at Kansas Speedway last year.

After winning the fall race at Charlotte Motor Speedway, the No. 48 Hendrick Motorsports team was automatically locked into the Round of 8 for the 2016 Playoffs.

That’s not the case in 2017. Johnson is on the bubble following last weekend’s race at Talladega Superspeedway, where he finished 24th after NASCAR parked the Lowe’s Chevy.

“It’s a tough position to be in,” Johnson said. “In some ways that crash also impacted other guys that I need to be concerned with. It kind of is what it is. We did fall a few spots in the points, but thankfully, we did score points in both of the opening stages. So, I mean I look back at Talladega and I think we all know and feel like there is going to be a ‘Big One’. I think there were only six (cars) running at the end, so, there were only a few people that actually made it through to see the checkered flag at all, which isn’t unexpected.

“But, coming here, this has been a great track for us. We have had a ton of speed here. I think back to this spring and how many cars we passed through the course of the day. We'll have a great performance here and we're going to need to have a great day. It would be great to get back to Victory Lane and get that momentum going in the right direction, but more than anything, we want to make sure that we advance and get to that next round of eight.”

Johnson has a seven-point cushion over Kyle Busch and an eight-point advantage over Matt Kenseth--both former series champions. Busch and Kenseth were both involved in the 16-car wreck that sidelined Johnson. However, when the No. 48 crew opted to work on the car under red-flag conditions, NASCAR sent Johnson to the garage. Busch’s car was beyond repair. He finished 27th and dropped from sixth to ninth in the standings, seven points behind Johnson.

Kenseth soldiered on to finish 14th, the second driver one-lap down. However, Kenseth, who is winless this season, hasn’t accumulated nearly as many playoff points as the two drivers ahead of him in the standings. With three race wins and one stage win, Johnson has acquired 17 playoff points. Busch’s 41 playoff points rank second only to points leader Martin Truex Jr.’s 64.

Johnson, Busch and Kenseth all have won at Kansas Speedway before. Johnson knows that competing against the Joe Gibbs Racing teammates and maintaining eighth-place in the Cup standings won’t be a layup.

“It really is challenging,” Johnson said. “And then you think of this track and the speed that the Gibbs cars have had, this has been a great track for Matt and Kyle. I could go out there and put myself in a nice position in the points and maintain this eighth place on the bubble, and Matt or Kyle wins and shifts that whole thing down.

“So, it’s going to be a challenging weekend. We need to hit the track with the mind-set of winning, largely because of the two, speaking of Matt and Kyle, those guys are both capable of winning here and shifting the points all around.”

Still, Johnson carries the confidence of winning seven titles into the battle. He hopes to be competing for No. 8 at Homestead. In 17 seasons, Kansas Speedway has suited Johnson’s style. He’s won three times on the 1.5-mile track and collected nine top fives, 17 top 10s and three poles in 22 starts. Despite a season where Johnson experienced his worst average finish of his career — 15.8 — he not willing to throw in the towel.

“During the week it’s easy to get frustrated,” Johnson said. “But, we are a team and a group that thrives on adversity. Whenever we have been backed into a corner we have always stepped up and have delivered. All the members of this No. 48 team love a challenge and we are not even close to losing that desire and that fight to be out there and compete and race for the win and race for the championship. Depending on the moment in time, sure, frustration, pressure, stress, all those things run through us, but that is part of pro sports. The position I’m in, chasing my eighth championship and the desire I have to be competitive week in and week out and be part of that final four the same for my team, it’s as high as it’s ever been.

“We really want to be there. It’s been a tough year in some respects. The speed department has been a little tough on us. I think we have been frustrated through the summer months and that yielded poor results and we really seem to be on the right track here the last few weeks and running competitive and collecting points, which is important.”

During practice and qualifying on Friday at Kansas Speedway, Johnson had at best a top-15 car. He was 14th in single-lap runs in first practice, posted the 15th fastest lap in the first round of time trials and never cracked the top 12 in the second round. He’ll start 14th in the Hollywood Casino 400 on Sunday.

“The thing I’m looking at is progression through the grounds and what we did over practice and that was all turning the right way,” Johnson said. “I think my effort level was kind of dialed-in a little differently today and a little better. Certainly, we want to be better than that. But, when I look at the fact that I out-qualified my teammates, we got faster through the rounds, starting closer to the front than we have in quite a few weeks, there are some good takeaways from today.

“Qualifying, as we all know, isn’t my sweet spot and I’m trying so hard to get better at that. This is a good week for me and we’re trying to discover some things to get better. I think I can say I’ve gotten a little bit better.”

Watch Johnson talk about his challenge to advance in the playoffs: