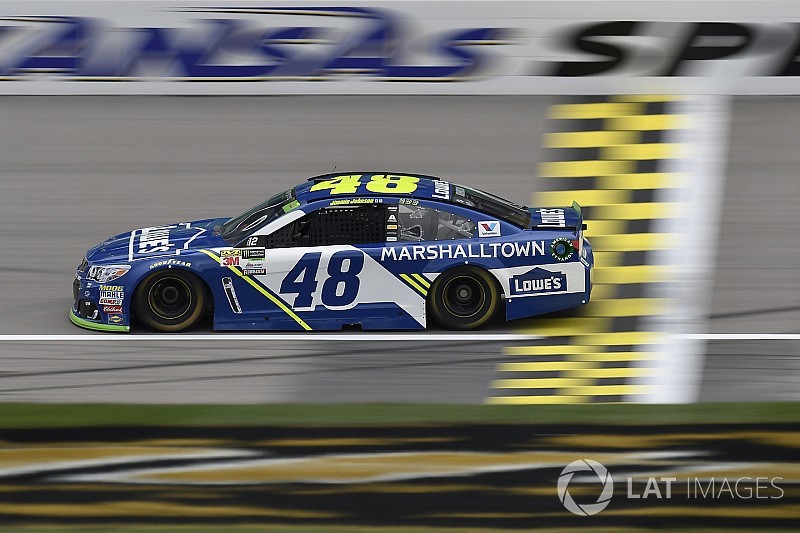 After wrecking twice on Sunday, the No. 48 Hendrick Motorsports team fought back and survived a 12-car wreck to finish 11th at Kansas Speedway.

More importantly, Johnson advanced to the Round of 8 with a shot of his eighth Monster Energy NASCAR Cup Series championship.

“It's just a roller-coaster ride you're on,” said Johnson, who is tied with Kevin Harvick for fourth in the standings. “We're just trying to keep the car on the track and keep it going. The No. 42 (Kyle Larson) had problems. That big crash on the back; you can just never give up in this sport.

“That's one thing that this team has always prided themselves on and I'm very thankful for that.”

Johnson triggered the seventh and eighth cautions in the Hollywood Casino 400. He spun off of Turn 4on Lap 185 and slid through the front stretch grass. Johnson came into the pits for multiple repairs and restarted 25th. The race restarted on Lap 192, but before the field completed a lap, Johnson lost control of the No. 48 Chevy again. Johnson told Knaus he had a flat tire and returned to pit road.

“The car was extremely loose,” Johnson said. “We fought the balance throughout the day and the car would swing so hard. We were trying for short run speed to free the car up and we just got too far with it and I spun out twice. Thankfully, I didn't hit anything too hard.”

Johnson dropped to 27th, the last car on the lead lap when the race restarted on Lap 198. That might have been a blessing, because the field didn’t complete a lap before contact between Erik Jones and Jamie McMurray ignited the multi-car melee.

“When things really changed was down the back straightaway in that wreck,” Johnson added. “Somehow, I went through there at a high rate of speed and missed everybody. I don't know how, but I made it. And then the No. 1 (McMurray) car was sitting there and I thought I had him lined-up for a square impact, but fortunately he slid out of the way.”

“We (expletive) made it,” Johnson told the crew over the radio. “I don’t know how, but it worked.”

When the smoke from the wreck cleared, Johnson lined up seventh for the restart. He was running in the top 10 when AJ Allmendinger triggered the 10th and final caution with 30 laps to go. Kyle Busch passed Johnson for 10th in the closing circuits, but with a nine-point advantage over Larson, the No. 48 team still advanced to the Round of 8 for the second time in as many seasons.

Although the standings are reset for the top-eight drivers, Johnson trails Martin Truex Jr. by 52-playoff points.

Of the three races in the next round, next weekend’s event at Martinsville couldn’t come at a better time for the seven-time champ. He has nine victories, 19 top fives, 24 top 10s and is the defending winner at the half-mile track.

"It's not a bad track for us,” Johnson said. “So, hopefully we can repeat last year's performance there. And then we have Texas coming up. We're not where we want to be. There's no doubt about it. But, we're staying alive and I know this team so well, we can find something and we're going to sure as hell try to get it."

Buescher scores impressive sixth at Kansas: “That was an awesome day"