Jimmie Johnson wants to end his career with Chad Knaus 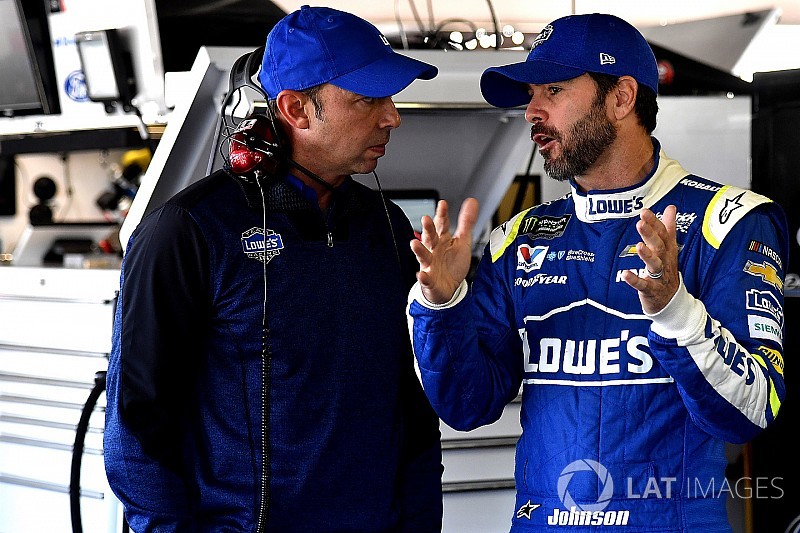 With seven NASCAR Cup trophies to their credit, the No. 48 Hendrick Motorsports crew has battled adversity better than any other team in the garage.

But lately, that simply hasn’t been the case.

Jimmie Johnson is 51-points behind fourth-place Brad Keselowski in the race for the final spot in the Championship 4 race at Homestead-Miami Speedway. Nothing short of a win at Phoenix Raceway will advance the defending Monster Energy Cup Series champion into the final four.

“It’s a pretty easy approach for us,” Johnson said. “We’re in a must-win situation. We wish we were in a better points scenario, but that’s not the case. This team thrives on pressure and adversity and we’re certainly in the position right now.

“When we look at the last two or three races here, we’ve had very competitive cars and the effort was made this week to make sure we brought the best bullet, second to none, and I’m really proud of my team and the way that all of Hendrick Motorsports is working together to make sure that the No. 24 car (Chase Elliott) and the No. 48 car have their best chances to win here and move on and stay alive for the championship. We’ll find out Sunday afternoon.”

Yes, this team has always thrived on the pressure in the past, but the No. 48 Lowe’s Chevrolet has always had the speed to compensate for mistakes. That hasn't been the case in the latter part of 2017.

Still, after seven titles, 83 wins, 35 poles and an appearance in every Playoff since NASCAR introduced the Chase in 2004, Johnson doesn’t want to change course when it comes to his crew chief, Chad Knaus. Hendrick Motorsports announced a three-year contract extension for Johnson in June, but there has been no news on Knaus, whose contract expires after next season.

“Yeah, I started this with Chad, and I want to finish it with him,” Johnson said. “Outside of something crazy happening. Crew chiefs live in dog years versus drivers. I think he’s made that known that his time might expire before mine does, just because of the wear and tear of being a crew chief.

Win together, lose together

Johnson refuses to point fingers. He took equal responsibility for team’s lackluster result at Texas Motor Speedway. When Johnson needed a strong run last weekend at Texas—a track where he has won seven times—he didn’t have the car or the strategy when it counted. A vibration and tire rub on Lap 67 knocked him back to 30th, two laps down. He never led a lap. He didn't finish in the top 10 in either of the first two stages. Johnson finished 27th, three laps off the pace. He picked up just 10 points for his effort and dropped to eighth in the standings in an eight-man race.

“Well, I’m a part of this team, so everybody has skin in the game and the performance of the car,” Johnson said. “At the end of the day chasing speed is really the culprit. And I feel that next year we’ll be in a much better position with the Camaro body on the race car. So, you start making decisions late spring and early summer, trying to extract speed out of the cars. And that doesn’t always make them comfortable to drive.

Speed is certainly something that has been missing from the No. 48 Chevy since Johnson picked up his third and final win of the season at Dover in June. He has led just 45 laps since then and scored just one top-five finish—third at Dover in the Round of 16. Johnson’s 217 laps led, four top fives and 11 top 10s are the fewest he’s posted in 16 seasons on the tour.

One last chance at Phoenix

Johnson remains optimistic—particularly with a new car coming to the Chevy camp in 2018. As for this weekend at Phoenix Raceway, where Johnson has four wins in 28 starts, the first step is dialing in the car for Sunday.

“Everything has been tried at this point,” said Johnson, who was eighth in Friday's opening practice. “I think we have to make decisions once we get on track this morning and see where that set-up leads us and if we’re ahead on speed, then we stay tight to that set-up. If we’re not where we need to be, we throw it all out.

“We can’t leave any questions on the table going into Saturday night. We need to try all variations of set-ups and try anything and everything we can today and tomorrow to get that car right.”

Roundtable: Predicting the final four for Cup, Xfinity and Trucks