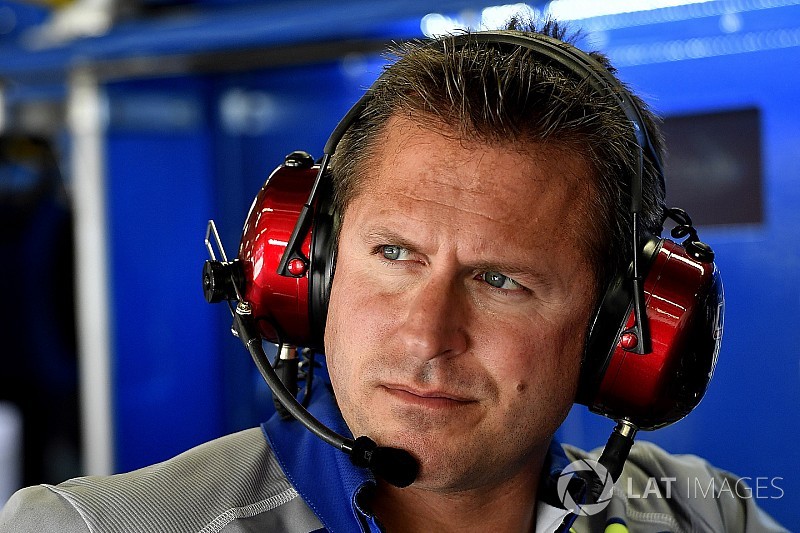 When the No. 48 Hendrick Motorsports team rolls down to Daytona International Speedway this week, they won't have their secret weapon.

When the No. 48 Hendrick Motorsports team rolls down to Daytona International Speedway this week, they won't have their secret weapon.

Ron Malec won’t be on the roster.

The long-time car chief won’t be rolling the familiar Lowe’s Chevy through technical inspection. He won’t be atop the pit box with crew chief Chad Knaus. And when Jimmie Johnson forgets for a moment and tries to turn to the go-to guy he’s relied on since his American Speed Association days—long before the seven NASCAR Cup championships—Malec won't be there.

“My asphalt career, we started that together,” Johnson said. “We both started out at the bottom of the food chain in both our professions. We shared our racing dreams together, and then were actually able to experience them from the lowest level to the highest level over the last 20 years. It was 1997 when we first got our apartment. So to experience all that together is pretty awesome.”

Coming off the road

After 16 seasons with the No. 48 HMS team and two decades with Johnson, Malec is coming off of the road. He will work as the vehicle final assembly manager for Hendrick’s Monster Energy Cup Series program. Malec will oversee the finishing touches on the Nos. 9, 24, 48 and 88 Camaro ZL1s before the cars leave Concord, N.C., bound for the track.

“It’s been one hell of a ride for sure,” Malec said. “I wouldn’t change anything that we’ve done. I was so fortunate to meet Jimmie when we were younger—get hooked up with such a great person and be part of his career the way I have been. It’s been incredible. I hope that I can continue to help our organization at the shop in my new position and try to make all four teams successful for Hendrick Motorsports.”

The 43-year-old Franklin, Wis., native is settling down with fiancée Ashley Parlett, an assembly mechanic for Chip Ganassi Racing.

"I've never had a girl that told me I need to go out to my shop and work on my car because she knows that's what makes me happy," Malec said. "It's just amazing."

The couple will be married on March 31. In an interview for Hendrick Motorsports eight years ago, the second-generation racer said if he wasn't in motorsports, he “would be a great father.” Leaving the road warrior aspect of his job behind will enable Malec to fulfill that dream.

“It does weigh on you,” Malec said. “You start to look at what you’ve done in your life. I’ve accomplished a lot in Motorsports, obviously. But I’m looking forward to what, maybe, a normal person would enjoy or even things that I enjoy in my life now that I’ll get to enjoy more because I’ll have more time.

“I’m getting married in March. We’re perfect for each other. I couldn’t ask for a better girl to spend my life with, but there comes a time when you realize that there is more to life than just motorsports. I wouldn’t trade it for anything—what I’ve done. But you do start putting things into perspective when you get older, that you want to do different things in your life and if you want to raise a family, you better get started. And it’s a lot easier being at home to do that, and it’s better for your family.”

Still, Malec will miss the camaraderie with the No. 48 team. Along with Knaus, he has been with Johnson since the driver's rookie season in 2002. In addition to a record-tying seven Cup titles, the team has amassed 83 wins, 35 poles, 222 top fives and 341 top 10s in 579 starts.

While Malec probably could have taken the fast track to being a crew chief, he chose to work in the trenches.

“There’s a major portion of this job that is more than just racing,” Malec said. “You get to be with your team and the guys that you travel with every week. And the friendships--I’ve worked with so many great people. So many friends come and go from this team, and I’m working with a great group right now, some of my closest friends. That’s what I'm going to miss the most.

“The competition portion—that comes and goes. You run good, you run bad, and we’re always working to be better. You never quit. But I really enjoy working with the guys and working on the car. I’ve probably been more hands-on than what a modern-day crew chief would be, and that’s probably why I chose to remain on this path.”

Last May, Malec was honored by Mechanix Wear with the Brian Lunniss Lifetime Achievement Award for his contributions to motorsports—just the second mechanic to be recognized. No doubt, Johnson will miss Malec’s presence and his attention to detail at the track.

“Obviously, I’m happy that he’s still with Hendrick and is going to be involved with our car,” Johnson said. “His influence, focus and dedication on the 48 car—I’m happy that I’m still going to be able to experience that and have him around.

NASCAR Mailbag: Will the Camaro have an edge on the competition?