How Jimmie Johnson avoided a pit road penalty from NASCAR 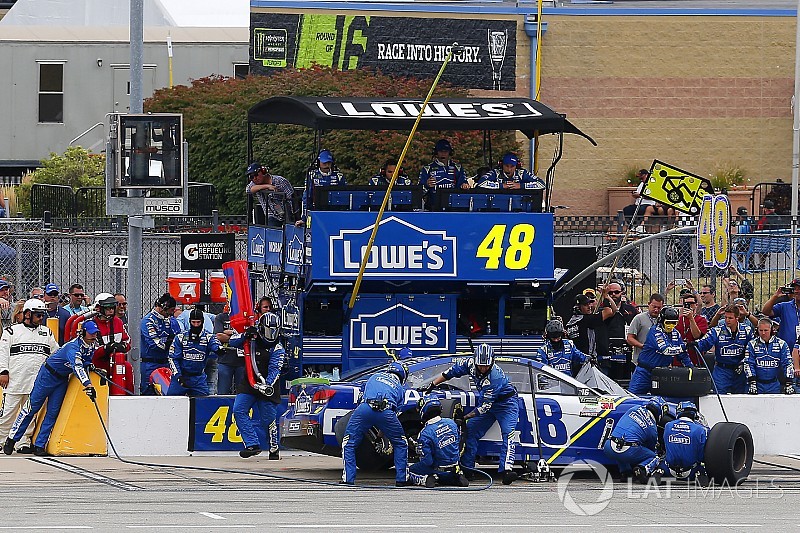 A late-race pit road miscue slowed Jimmie Johnson’s charge to the front Sunday at Charlotte Motor Speedway, but the situation might have been worse.

Johnson had raced his way into the top-five of Sunday’s Bank of America 500 when he visited pit road under caution on Lap 283 of 337.

After his team had completed the stop, Johnson began to leave his stall but stopped almost immediately when he was told by his team that lug nuts on his left-front tire were unsecured.

With his No. 48 Chevrolet not fully inside its pit box, Johnson’s crew fixed the lug nuts and he continued on, but the error cost him a lot of extra time. Johnson ended up restarting 16th and finished the race in seventh.

Still, many thought Johnson got away without additional penalty for servicing his car outside his pit stall.

Not so, said NASCAR officials.

A NASCAR spokesman confirmed this after the race, saying the team noticed a potential safety violation immediately and corrected the issue, which it considers far more important. The extra time it takes for the team on pit road is considered penalty enough.

“We had a similar thing happen (at New Hampshire), and NASCAR informed us that we didn’t need to back up into our pit box to complete the stop, so that’s why (crew chief) Chad (Knaus) stopped me where he did,” Johnson said.

“We’ve been calling particular thing consistently the past couple years with the lug nuts,” he said. “The way we look at that is they did their normal pit stop in the pit box, he left, they realized they had a lug nut (issue) and at that point to us it becomes a safety issue.

“We allow them to put the lug nut on and the penalty becomes, they lost probably 10 or 12 spots during that pit stop. We let them do that because we want to make sure it is a safe situation out there on the race track.”

Miller confirmed the No. 48 team had actually faced the same situation last month at New Hampshire and NASCAR reacted just as it did in Sunday’s race.

Sonoma Raceway not at "immediate risk" as wildfire rages nearby