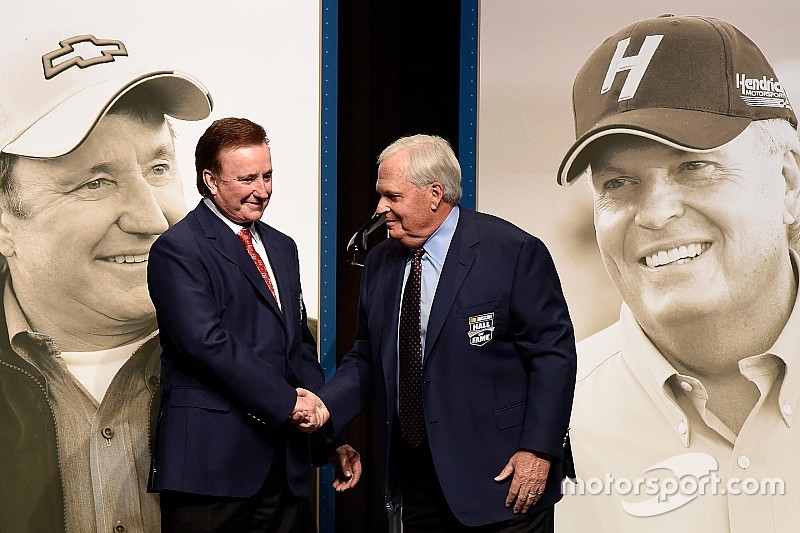 NASCAR on Friday night formally inducted the Class of 2017 into its Hall of Fame.

Here are some of the highlights from Fridays’s induction ceremony:

Parks was the winning car owner of NASCAR’s first two seasons – 1948 in modifieds and 1949 in what is now the premier Cup series. In the early days of NASCAR, Parks loaned money to NASCAR founder Bill France Sr. to help keep the organization afloat.

"I will tell you knowing my grandfather, anybody who knew him, he could speak a whole book in two words. And the first time, to let you know how he was, I asked him, how did you get into racing, and in less than 10 minutes, he told me his whole life story. His story was, ‘Well, I got some cars, and I just started winning.’

"What really hit me, I think, was the first time I went to the Daytona Speedway, I was sitting in the stands, and it hit me, because everything I had heard growing up, I could see all of them in the Streamline Motel. I could see the cars racing around in the sand. I could just envision everything that he accomplished, and it was like all of the stories became real."

Parsons was a two-time ARCA series champion and winner of the 1973 championship in what is now NASCAR’s Cup series, where he won 21 races in his career. After retiring from driving, Parsons became a popular NASCAR TV analyst on several networks, including TNT, ESPN, NBC and TBS.

"There's a lot of old crew members that worked on numerous cars that he drove that are here, and I talked to a lot of you tonight, as well. Most of all, the most important thing about tonight for him would be the people and especially the fans, understand how much they meant to him and how much he loved each and every one of you. You all have such great stories, and tonight is really a celebration of his life. This is not sad, this is happy. I'm the only one that's sad.

- From induction speech of Terri Parsons, widow of Benny Parsons

"I am honored to go into the NASCAR Hall of Fame with my heroes. Just look around this wall and look at the greats that we'll be going in the Hall of Fame with. Unbelievable. And to go in the Class of 2017 with so many great inductees is quite an honor.

"I'd like to start out by saying only in America. Only in America could a kid selling peanuts and popcorn at Bowman Gray Stadium have a dream of becoming a race driver someday, and then he goes out and buys him an old '47 Plymouth, pays $20 for it, that was the best investment I ever made, and have a dream of being a NASCAR driver someday, be standing up here tonight to be inducted into the NASCAR Hall of Fame. Only in America. What a great country we live in.

"There's one driver in particular, Dale Earnhardt. I wouldn't be standing here tonight without him. He was a great friend and a huge loss to all of us and to our sport. I knew Dale for over 25 years. We spent 18 seasons together racing. I have so many great memories. Winning our first championship, winning the Daytona 500, Indy, and many more."

- From induction speech of Richard Childress

Hendrick, too, began his racing career as a driver but eventually built the most successful organization in the history of stock-car racing. Hendrick Motorsports has won a NASCAR-record 15 championships across NASCAR’s three national series, including a record 12 in the Cup series. Seven of those titles came with driver Jimmie Johnson, four with Jeff Gordon and one with Terry Labonte.

"To my wife Linda, I don't know if you remember this, I'm sure you do, 44 years ago this month, we swapped rings. So this ring is as much for you as it is for me, because there's nobody that's sacrificed what you've sacrificed for me to do what I've done. She stood in the back of the grocery store with me, and we counted our money before we went to the checkout line. Our bed in our first house had three legs and Muncie four‑speed gearbox for the fourth leg.

"When we were boat racing, she was selling tee shirts out of the back of the trailer so we could raise enough money to go back and do it again. So she sits in church on Sunday, so many Sundays by herself when I've been gone for 44 years doing what I love. Tonight, this is as much yours, probably more, than it is mine. I love you, and thank you for all you've done.

- From induction speech of Rick Hendrick

Often called “the best NASCAR driver never to win a championship,” Mark Martin won 96 races in NASCAR’s three national series – 40 in Cup, 49 in Xfinity and seven in Trucks. He was also a five time winner of the International Race of Champions. Martin never won a championship in the Cup series but finished second in the series standings five times, most recently in 2009. The bulk of Martin’s Cup career (19 seasons) was spent with Roush Racing and team owner Jack Roush.

"I can't tell you how it feels to stand up here in front of you tonight. It's a feeling that my words could never do justice. To me it's an honor ‑‑ to say it's an honor would be an understatement. To say it's a culmination is a fact. It's an honor beyond the wildest imagination of a kid from Arkansas that just loved to drive fast cars and win races.

"Most importantly, it's the recognition of hard work, determination, drive and focus, not of myself, but of those that gave their blood, sweat and tears to put me up here tonight. I want to thank all the Hall members, all the ones that came before me. If not for the groundwork they laid with their relentless passion and effort and sacrifice to the sport, there might not be a NASCAR at all, and there certainly wouldn't be no Hall of Fame.

"When I was informed that I'd be inducted into the Hall of Fame, I was greatly humbled and speechless to even be mentioned in the same breath with my racing idols. I was overwhelmed with appreciation and gratitude for all those that helped put me in a position to even compete in NASCAR races."

- From induction speech of Mark Martin