Get to the Points ... Following the Sprint Cup Series race at Richmond, Harvick will represent RCR in the 2011 Chase for the NASCAR Sprint Cup. His victory at RIR places him tied for first as the top-12 drivers battle it out for the championship title over the next 10 events, starting this weekend at Chicagoland Speedway. Bowyer remains 14th in the standings, Menard slid to 23rd, while Burton stayed at 24th.

You never know what's going to happen and you've just got to take it one week at a time right now.

This Week's Budweiser Chevrolet at Chicagoland Speedway ... Kevin Harvick will race chassis No. 378 from the Richard Childress Racing NASCAR Sprint Cup Series (NSCS) stable. This is a brand new race car that will see its first on-track action at Chicagoland.

Kicking off the Chase ... Sunday's race at Chicagoland kicks off the Chase for the NASCAR Sprint Cup. Harvick enters the Chase on the heels of last Saturday night's win at Richmond International Raceway, his fourth of the season, which has him seeded second in the NSCS driver point standings heading into the 10-race stretch.

Chicagoland Speedway holds the first race of the Chase this weekend and it's a place where you've won just about every way you can win. You've won after spinning out in the middle of the race and you won the first race there. How do you feel about the track now? "We struggled a little bit there last year, but we feel like we've done some things to hopefully head in the right direction. It's a very fast race track. It's really round, so you carry a lot of momentum through the corners. Hopefully we've got a good plan and can get (the Chase) started off on the right foot."

Talk about kicking off the Chase for the NASCAR Sprint Cup at a new venue this year with Chicagoland Speedway. "I'm excited. I love change. I think we should change it up every year. Chicago is a great city. There's a lot going on Chicago this weekend as we go there to start the Chase and I'm looking forward to it."

How does the win at Richmond help change your team's momentum entering the Chase? "It definitely helps. We had a little bit of a rough summer and we got off of our game. I think a lot of that came from winning so many races early. We were able to try so many things and a lot of them, well most all of them, didn't work. We went back to what we know over the last couple of weeks and we've had top-five cars and to get the win at Richmond gives us a lot of momentum going into the next 10 weeks."

Did you learn anything last year from being in contention for the championship all the way through the last race that you'll be able to use in the Chase this year? "I think any experience you have in situations like that never hurts. For us to have the whole team have that experience was important and it was for me as well. You've got to understand that there are going to be some bumps in the road and you've got to take what you can get out of those days and just not dig yourself a huge hole. You never know what's going to happen and you've just got to take it one week at a time right now." 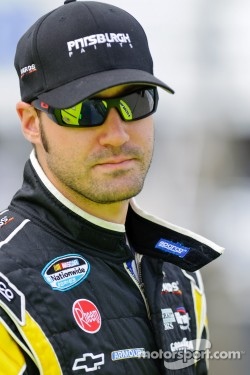 This week's Zecol/Menards Chevrolet at Chicagoland Speedway ... Paul Menard will pilot Chassis No. 326 from the Richard Childress Racing NASCAR Sprint Cup Series stable. This No. 27 Chevrolet Impala was a brand new addition to the RCR fleet for the 2011 season and was last seen in competition at Michigan International Speedway (August) where Menard started 11th and finished 26th. This racer also saw time at Bristol Motor Speedway (March) where he started fourth and finished fifth, The Sprint Showdown (May) where he started third and was running second when he was hit on the restart, relegating him to an 11th-place finish and at Michigan International Speedway in June, where Menard started ninth and finished fourth.

Is it weird that New Hampshire Motor Speedway isn't the first race of the Chase for the NASCAR Sprint Cup? "Not really, we still go there during the Chase. The race in Chicago should be fun, and it's a good way to start off the Chase."

What kind of success have you had at Chicagoland (Speedway)? "We've run decent there in the past. The intermediate tracks and mile and a half tracks have been our strong suit. This will be our first visit to Chicagoland as a team (the No. 27 team), but I think we'll run well there."

If you were the president of NASCAR for a day, what track would you add to the Chase? "I would say road course. You would cover all your bases with the different tracks that we run on. If not a road course, then a dirt track."

A dirt track? "Yeah, Springfield (Illinois State Fairgrounds) or something like that. It would be kind of cool. I've never run on dirt, so I wouldn't be very good, but it would be a lot of fun."

Talk about last year's race at Chicagoland (Speedway). "We ran top 10 for a lot of the race. We passed a few cars and a few cars passed us. Other than that, it was uneventful. Those days are always pretty good." 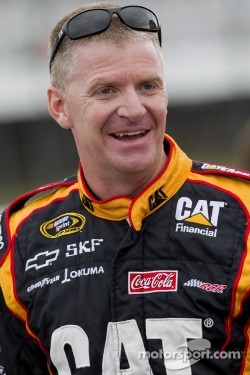 This Week's Caterpillar Chevrolet at Chicagoland Speedway ... Jeff Burton will race chassis No. 355 primary from the Richard Childress Racing NASCAR Sprint Cup Series stable. Built new for the 2011 season, this No. 31 racer was first put through its first competitive paces at Darlington Raceway in May. Burton was on his way to posting a top-10 finish until the engine on the Caterpillar Chevrolet expired with just fewer than 20 laps remaining and resulted in a disappointing 33rd-place finish. In addition, this yellow and black machine was run at Kansas in June where it finished 25th.

What do you think about Chicagoland Speedway starting the Chase for the NASCAR Sprint Cup? "I think it's great. There is a large fan base there, and when you think about how many companies perform business in the Chicago area and are located in Chicago, it's a big city. I think it's a good race track for us to be at for the Chase. We typically have really good crowds there and a lot of excitement from the fans. I'm excited to go there."

You finished seventh there last year. Chicagoland Speedway seems to be a good track for you. "It has been. It's funny, it's one of those tracks that I almost have to go back and watch video to remember the race there. Chicago and Kansas are so similar that until I get there, I get them confused. They came onto the schedule about the same time, and I have to watch video to refresh myself about the races the year before. It's been a good race track for us. I really do like racing there. I think it's a fun track."

What does having a race in the Chase for the NASCAR Sprint Cup mean for a race track? "I think the most prestigious races, short of the Daytona 500 have a lot of energy around them, and the ones that lead up to the Chase and at the beginning of the Chase have so much going on that make them a lot of fun for the fans. There are so many people. I think those races are really exciting. To have one of those races, I think means a great deal to a track."

What do you think about the tracks in the Chase for the NASCAR Sprint Cup this year? "I think that we should have the most prestigious tracks hosting Chase races. In my opinion, that's Daytona, Darlington, Indianapolis, Charlotte and then we can start getting into the debates. For example, the Southern 500 having it at that time of year would break tradition a little bit, but I think having the Southern 500 would be really cool in the Chase." 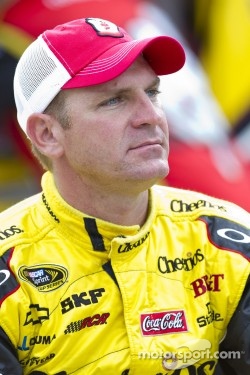 What do you think of Chicagoland Speedway being one of the Chase for the NASCAR Sprint Cup tracks? "I don't know. Sometimes moving track dates around is a good thing. Change isn't always a bad thing. We can't be afraid of change. I think it could be good."

If you could be the president of NASCAR for a day, what track would you add to the Chase for the NASCAR Sprint Cup? "I don't really know. I can't believe I would ever say this, but I might move one of the road courses to the Chase. It's been, for whatever reason, some of the most exciting racing that we've had all season. The tough thing about that is, it's a make or break you kind of track. There are a lot of things that could happen and a lot of craziness and wrecks that could happen. You either make up or lose a lot of ground. I don't know. With so much that rides on the line with the Chase, it would certainly shake things up."

You've been in the top 10 in four of the last five races at Chicagoland Speedway, is that one of your favorite tracks to run at? "Well, I didn't know that. I hope that we continue with a top-five run or, better yet, a win. That would be big."