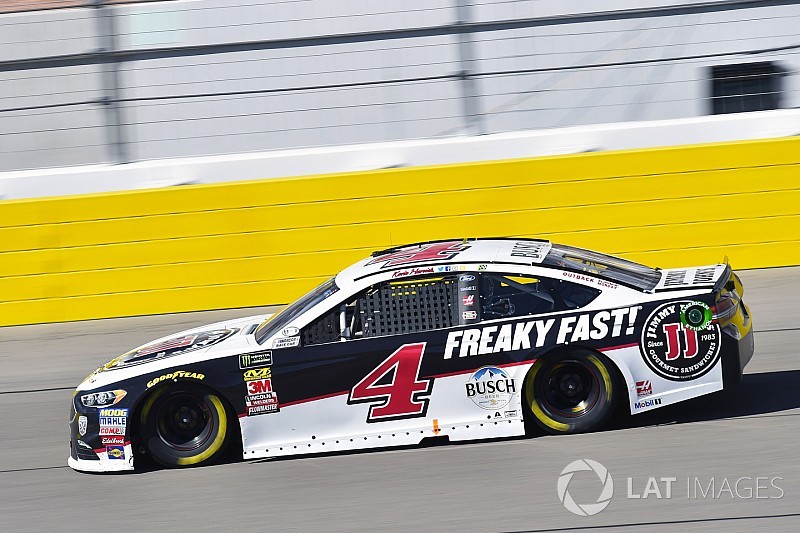 There has been a lot of talk this week surrounding the rear window of Kevin Harvick's winning car from Las Vegas Motor Speedway.

The car, which led 214 of 267 laps and swept the stages at LVMS, appeared to have an abnormal bend in the rear window and surrounding roof area when running at speed.

It did not go unnoticed with Chase Elliott and crew chief Alan Gustafson speaking about it over the No. 9 radio during the race. "When he's up to speed, that thing pushes down -- I don't know -- two, three inches," said Gustafson. Elliott acknowledged that he could see it too.

Dale Earnhardt Jr. touched on it during the 'Dale Jr. Download' on Dirty Mo Radio earlier this week.

"The roof of the car seems to have some kind of deflection," he said. "It's something at speed that seems to be altering the shape of the roof. If they are actually doing something that pops back into place when the race is over, it's pretty incredible to be honest with you."

Brad Keselowski also gave his take on FS1's NASCAR Race Hub, saying, "Well I can tell you that it doesn't make the car run worse and at this time, there is not a rule against what we see here."

Finally, crew chief Rodney Childers had his say on SiriusXM NASCAR Radio, attempting to clarify what was going in the area in question.

"It's funny to me to read that stuff. It's like everybody thinks I'm a genius and we just all of a sudden made this happen on its own," he quipped. "Basically, we had a rear window brace fail. You know, NASCAR mandates that we run a certain T-bar in the back glass and that T-bar is actually pretty strong ... The center brace that holds that T-bar is what bent and failed and the T-bar ends up being stronger than the back of the roof at that point and it pulled the roof down.

"It's not something that we wanted to happen," he added. "You definitely don't want the back of the roof sharp. You want the back of the roof round and you want that to be a smooth transition. I think everybody thinks that it helped. I would suggest that it probably didn't help. The car was plenty fast enough before that happened and I think everybody in the garage knows that."

Childers doesn't expect NASCAR to get involved in the issue, saying it's a simple matter of fixing it to ensure it doesn't happen again.