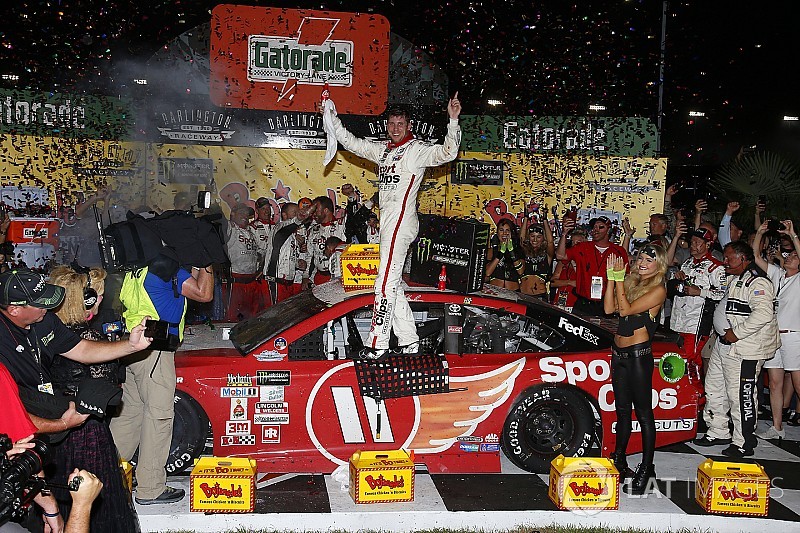 The Lady in Black bit Martin Truex Jr. with three laps remaining and she turned the lead and the win over to Denny Hamlin.

Hamlin pulled off the double at Darlington Raceway this weekend after winning the Xfinity Series race on Saturday. He came back on Sunday for his 31st-career Monster Energy Cup Series race.

“I drove my ass off, that’s as hard as I can drive,” Hamlin said after winning his first Southern 500. “I love this race track. This is the Southern 500 -- it doesn't get much better than this.”

Hamlin led a race-high 124 laps —tied with Kyle Larson — for his second victory at the 1.366-mile track.

The race barely got running when David Ragan spun in Turn 1 to bring out the seventh caution. He was running 25th at the time. Hamlin held the point followed by Kyle Busch, Keselowski, Larson, Truex, Harvick, Kurt Busch, Logano, Newman, Kenseth.

The race returned to green on Lap 210 with Hamlin in the lead with Kyle Busch alongside. The top 12 stretched out single filed after the first couple of laps. Five laps in, Hamlin’s lead was .474-seconds over Kyle Busch followed by Keselowski, Larson, Truex, Harvick, Kurt Busch, Logano, Newman, Kenseth, Jones, Austin Dillon, Johnson, Elliott and Earnhardt.

Trevor Bayne received his second Darlington stripe on Lap 221 in Turn 4. He limped onto pit road. Ryan Blaney followed his fellow Ford on Lap 224 after damaging the No. 21 Ford in Turns 1 and 2 after wrecking in the first stage. One lap later, Ragan joined the parade back to pit road.

Harvick radioed to the No. 4 team, “This is the worst we’ve been.”

Logano was first to pit out of the top 10 on Lap 248. Kyle Busch, Truex and McMurray came on the next lap followed by Larson and Newman on Lap 250. Hamlin pitted from the lead on Lap 252 along with Harvick and Kurt Busch.

Kurt Busch whipped around the Nos. 18 and 78 Toyotas for second-place on Lap 267. With 100 laps remaining, Harvick ran fifth followed by Logano, Kesneth, Keselowski, Dillon and Newman.

Busch closed to within .370-seconds over the next 10 laps. Truex ran third followed by Harvick, Kyle Busch, Kenseth, Logano, Dillon, Keselowski and Jones.

Harvick reported a loose wheel on Lap 280 while running fourth. He told his crew he was losing rear grip. Meanwhile, his teammate crept closer to Hamlin, looking inside of the No. 11 entering Turn 4.

Kyle Busch passed Harvick for fourth on Lap 285. Keselowski received right rear damage to his car and began dropping through the field. He was 17th with 80 laps remaining.

Hamlin began pulling away from Kurt Busch and with 75 laps to go, Truex passed the No. 41 for second. Kyle Busch remained fourth followed by Harvick, Kenseth, Austin Dillon, Logano, Jones and Newman.

Hamlin was still leading on Lap 300 followed by Truex, Kurt Busch, Kyle Busch, Austin Dillon, Cassill and Menard. Dillon pitted from fifth. Harvick moved up to sixth — one lap off the pace while waiting for the leaders to pit. Truex pit from second on Lap 304. Menard and Kurt Busch pitted one lap later.

Hamlin held a 8.297-second lead over Kyle Busch with 55 laps remaining. Hamlin came in hot to the pits on Lap 314 and missed the entry. Hamlin had to make another lap and came with Busch off the lead lap for service on Lap 315. Harvick cycled out to the lead on Lap 316 followed by his Stewart-Haas Racing teammate Kurt Busch with Truex, Kenseth, Austin Dillon, Jones, Johnson, Elliott, Larson and Logano in pursuit.

Busch took the lead from Harvick on Lap 319. Truex passed Harvick for second on the next lap. Kenseth, Dillon, Jones, Johnson, Elliott, Larson and Newman rounded out the top 10. Truex tracked Busch with 45 laps to go — working the high line through Turns 3 and 4. Truex made the move for the lead entering Turn 1 on Lap 325.

Hamlin and Kyle Busch moved back into the top 10 on Lap 329 as Truex lapped Keselowski — the 17th-place car on the track. Keselowski came in for service on Lap 333. Jones pitted on Lap 336.

Johnson pitted on Lap 340. Earnhardt came with what he determined to be a cut tire on the next lap. Elliott pitted with his Hendrick teammate.

With 20 laps remaining, Hamlin passed Kurt Busch on the inside for second. His brother made the move on the next lap. Austin Dillon hung on to fifth.

Truex held a four-second lead over Hamlin with 10 laps to decide the race — but the No. 11 was catching him. Truex lapped Larson one lap later to leave 10 cars on the lead lap. Truex’s advantage over Hamlin was less than a second with five laps to go. Kyle Busch, Kurt Busch and Austin Dillon.

Truex hit the wall with three laps remaining in Turn 4 and Hamlin took the lead.

Watch a recap of the race and the Victory Lane interview with Denny Hamlin:

Truex just misses out on victory in "bittersweet" Southern 500