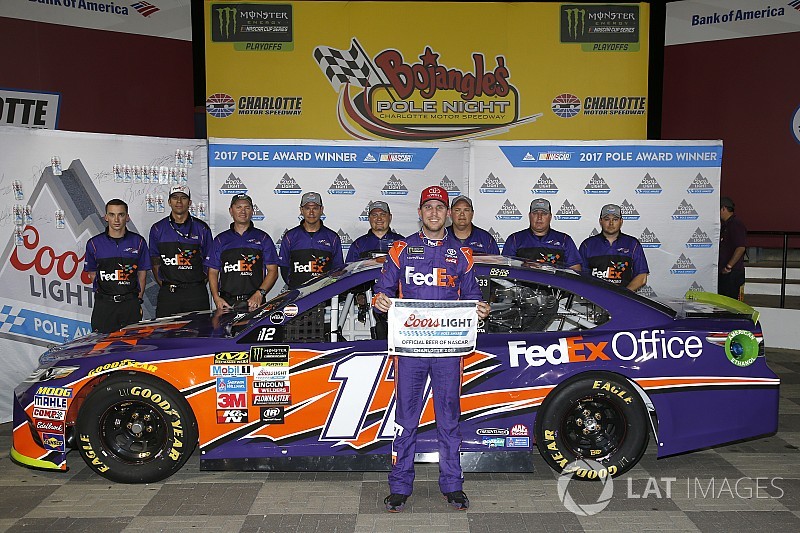 Hamlin continued a streak of winning at least one pole in each of his full-time seasons in the Cup series. His previous best start this season was three seconds at Auto Club Speedway, fall Richmond and Chicagoland.

The pole is the 25th of his career.

“You always like keeping streaks alive,” said Hamlin. “I hadn’t had a pole this year and had one every other year but we’ve been so close. We’ve made a lot of final rounds, been in the top-five but not as fast as our other teammates.

“Today, we adjusted on it and we were a little bit better each round and had some good results. Any mile-and-a-half track you go to, you want to have the No. 1 pit stall, you want to be out in clean air.”

Kenseth came in with an average lap speed of 191.489 mph. Kevin Harvick – who won the pole here in the spring – was third-fastest, Kyle Busch was fourth and Clint Bowyer fifth.

Among the surprises who failed to advance was current NASCAR playoff No. 1 seed Martin Truex Jr., who will line up 17th on Sunday.

Dale Earnhardt Jr. and Kyle Busch both cleared inspection with just enough time to make a qualifying attempt. Both drivers were fast enough to advance to Round 2.

Jimmie Johnson was the only playoff driver to fail to advance to the second round and will start 25th.

Erik Jones failed to clear pre-qualifying inspection in time to take a lap before the expiration of the first round and will start Sunday’s race 38th.

Neither of BK Racing’s two drivers, Corey LaJoie and Brett Moffitt, took a qualifying lap in Round 1. LaJoie will start 39th and Moffitt 40th.

In addition, neither car participated in Friday’s lone practice session. The team declined comment on its situation. It remains unclear whether either car will take the green flag in Sunday’s race.

Several cars began the first round not yet having passed pre-qualifying inspection. Among them were Busch, Earnhardt, Jones, Austin Dillon and Jimmie Johnson.