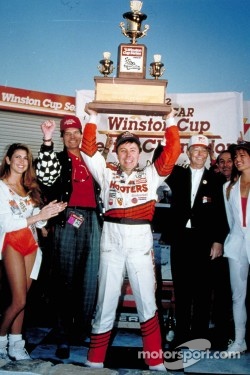 There were 1,854 races during NASCAR’s first 50 years of existence, but it’s a good bet that none of them was filled with more intriguing storylines than the season-ending Hooters 500 at Atlanta Motor Speedway on Nov. 15, 1992.

For starters, the greatest career in NASCAR history was coming to a close as Richard Petty, winner of a record 200 series races and seven championships, decided he would no longer compete after 35 years in the sport.

It also marked the debut of an up-and-coming young driver named Jeff Gordon, who had been signed by car owner Rick Hendrick and was all of 21 years old.

But the headliner was undoubtedly the three-way championship battle between Ford drivers Bill Elliott, Alan Kulwicki and Davey Allison. Allison held a marginal point lead going into the race and was trying to join his father, Bobby, as one of only two father-son duos to win NASCAR’s top series title while Elliott was looking to bounce back after seeing a big lead late in the year disappear and capture his second crown.

Then there was Kulwicki, who was bucking all NASCAR odds as an owner/driver with a small but dedicated crew and limited resources. He found himself second in the standings going into the finale, trailing Allison by only 30 points and 10 points ahead of Elliott, who was in third. Despite trailing Elliott by a seemingly insurmountable 278 points after Dover, he had put himself in position to win the title by posting three top-five finishes while Elliott came back to the pack, in part, due to mechanical issues.

“Davey Allison needed to only finish fifth in that race to claim the championship. That’s all he needed to do,” recalled veteran motorsports writer Steve Waid. “He was running fifth about 254 laps in when he got in a wreck with Ernie Irvan. Ernie swerved in front of him and Davey couldn’t avoid him. Davey wrecked and was out of the race. Now the championship was down to Elliott and Kulwicki.”

At that point, the legend that eventually became Alan Kulwicki was born. He and his team figured out that if they led the most laps, they could win the championship by finishing second. That’s when he began stretching his fuel, going 11 laps further during one run as the leader to clinch leading the most circuits and essentially forcing Elliott to win the race and hope Kulwicki finished third or worse.

“He was without a doubt the most unique driver that NASCAR had ever seen. First of all, he was a college-educated engineer. He was a perfectionist,” recalled Waid. “He always considered himself the underdog, so he took off the ‘TH’ on the front of his car so it said “Underbird.” He knew what he was up against, so to go out there with the odds stacked against him like they were, and then the most amazing thing was calculating to the very lap how many laps he had to lead in order to win the championship.”

Elliott did all he could as he assumed the race lead and went on to win, but Kulwicki finished second and claimed the title by 10 points, which, at the time, was the closest margin in NASCAR history. In the end, the difference was one lap. Kulwicki led 103 laps compared to Elliott’s 102, meaning those five bonus points determined the championship. If they had tied, the title would have gone to Elliott by virtue of him winning more races (five) than Kulwicki (two).

“When we came into Atlanta, by that time, we had given away too many points. The guy that had it to lose was Davey, and I guess they ended up wrecking pretty early in the race, and then Alan had it to lose. All I had to do was win,” said Elliott. “I mean, to me, that’s the way we pretty much looked at it. We did everything we could right. We went down there. We won the race. We did everything we could do at that point in time. I felt like we gave it our all and we came up short. But, there again, we didn’t have it to lose, we had it to win.”

Tom Roberts had one of the best seats in the house to watch the drama unfold. As the public relations representative for Kulwicki, he monitored the entire race on his radio from the team’s pit box.

“There were so many ups and downs. Davey Allison was in that crash, and then the way things were calculated as far as leading that one more lap, there will never be another race like that,” said Roberts. “I always had that comforting sense to know you had that mastermind who was behind the wheel. You could have the greatest crew chief on the face of the Earth, but you always had that little edge in the fact that you had his mind that was driving the race car.”

The irony to Kulwicki beating Elliott for the championship is that just a few months earlier they were both tied to car owner Junior Johnson, who was looking for a driver to replace Geoff Bodine. He went after Kulwicki, who turned him down, before signing Elliott.

“I was one of the most vocal ones to sort of call Alan Kulwicki dumb for not signing up with Junior Johnson, who probably had one of the best rides in NASCAR,” recalled Michael Kranefuss, who was the director of Ford Racing at that time. “He said, ‘No, Michael. I really think I can do it better myself.’ That was Alan, and I was wrong. The way he won the championship is evidence of the way he approached the whole thing. He did not sit and complain that he only had five sets of springs when top teams had 25 sets. He just made do and he found the right people to support it.”

That dynamic made victory lane all the more interesting as both drivers ended up there – Elliott for winning the race and Kulwicki for taking the championship.

“They embraced and they congratulated each other,” recalled Roberts. “It’s nothing personal against Bill. I still think the world of Bill Elliott and always will, but the fact it was the car owner, it was Junior Johnson who had tried to get him to drive for him, it only added to the feeling of, ‘Wow, this really is an accomplishment.’”

The championship was the fifth in NASCAR Sprint Cup history for Ford Racing, but the happiness of that day was quickly erased when Kulwicki was killed in a plane crash four months later.

“The only sad thing about Alan is at the end of the day he didn’t have time to enjoy it. Who knew that he only had months to live after that happened that particular day,” reflected Elliott. “I’m glad he won the championship, but, there again, I look back and I felt like at the point in time I did everything I could do that particular day and it ended up the way it ended up. We don’t know why it ended up that way, but, at the end of the day, maybe we do.”

Kurt Busch ready for the battle at Phoenix II

Bill Elliott: "I feel like I hit everything but the lottery" in return

Bill Elliott on Road America: "I don’t have a clue how it’ll turn out"