One Ford philosophy pays off for Keselowski at Talladega 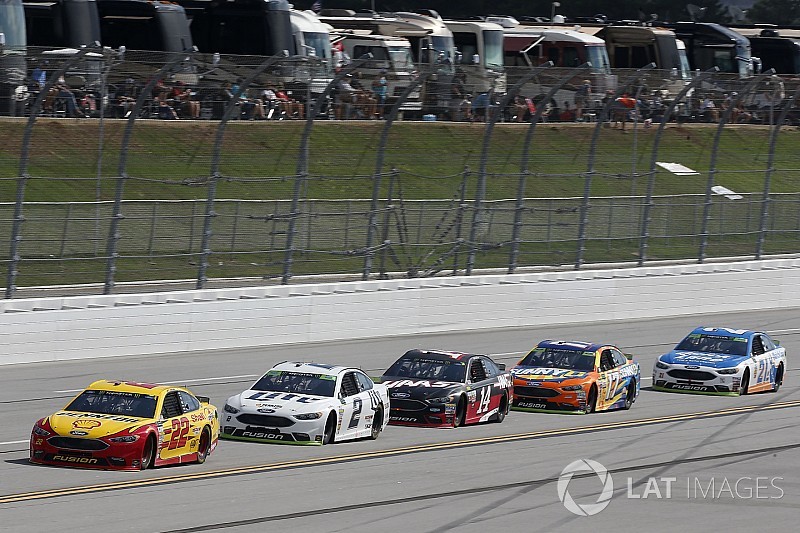 During Speedweeks at Daytona in 2016, a trend developed among the top-five Toyota teams.

While other teams carried on with the traditional exercises of practice, the four Joe Gibbs Racing drivers along with Martin Truex Jr., lined up in a five-car draft.

Clearly, there was horsepower in numbers.

Denny Hamlin went on to deliver Toyota its first Daytona 500 win — and the manufacturer swept the podium. Kevin Harvick was the only spoiler in the top-five finishers.

Fast forward to Friday at Talladega. Brad Keselowski led a line of nine Fords to the top of the speed chart in the first Monster Energy Cup Series practice. Team Penske aligned with Stewart-Haas Racing, Roush Fenway Racing, Wood Brothers Racing and Richard Petty Motorsports. Only .062-seconds separated the nine cars as the pack cruised around the 2.66-mile track.

If five Toyotas could dominate Daytona, when Ford flexed its muscles with Roush-Yates power under the hood, the Blue Oval Brigade just might be unstoppable in the Alabama 500.

On Sunday, Ford executed its strategy masterfully under unpredictable race conditions. The majority of Fusions drafted and pitted together. Six Fords combined to lead 114 of 188 laps. On the final restart, Keselowski held the point but the Chevy-Toyota tandem of Ryan Newman and Denny Hamlin cruised to an early lead. Aric Almirola offered an assist to Keselowski to return to the front. Logano completed task and pushed the No. 2 Miller Lite Ford to checkered flag.

Not only did Ford win all four restrictor-plate races in 2017, but Ford drivers also have combined to win the last seven races at Daytona and Talladega and nine of the last 12 events at those two tracks.

“That's a big number,” Keselowski told Motorsport.com. “You know, I think in other things that happened, we got beaten and kind of embarrassed at Daytona in 2016 for the 500, and I think we all felt like at that point we hadn't done enough homework and that we needed to get back to work, and in a lot of ways that's exactly what we did. So you know, that was definitely hitting right between the eyes.

“But I also think that the Ford drivers and teams are cognizant of how difficult these races are to win by yourself, and again, nobody expects, at least I don't expect I should say, anyone to pull over and let me win a race, but if there's an opportunity to help a Ford win, we want to see that happen.”

With restrictor-plate events evolving into races of attrition, it’s not always easy to find a dancing partner. Keselowski’s strategy was first complicated by a broken radio that limited his communication during the second half of the race to crew chief Paul Wolfe. He came to the pits for repairs with 30 laps remaining in the race and restarted 30th.

Five laps later, the first of two cautions occurred that would wipe out half of the remaining lead-lap cars. Keselowski survived but six Fords were involved in the 16-car wreck on Lap 171 — including former 2017 restrictor-plate winners Kurt Busch and Ricky Stenhouse Jr. Kevin Harvick and Ryan Blaney were eliminated over the next six laps.

Of the 12 cars remaining on the lead lap, five were Fords and each of the drivers — Keselowski, Trevor Bayne, Logano, Almirola and David Ragan were all previous restrictor plate winners. Throughout the weekend, the One Ford concept was in effect and on Sunday the effort paid off with the win.

“There's conveniences to that with respect to not having too many cars in the packs and risking getting wrecked and so forth and pit strategies and whatnot,” Keselowski said. “But it also can be difficult sometimes.

“But I think in general I'm really happy with how all the Ford teammates have embraced each other because we want to see Ford be successful.”

Was Talladega the one that got away for Denny Hamlin?