Johnson's speech was the climax of the evening, but the humor that preceded it often brought the house down.

LAS VEGAS -- Ultimately, the 2013 NASCAR Sprint Cup Series Awards were all about Jimmie Johnson and his sixth series championship, but there were some pointed jokes and some return barbs before the Friday night program at Wynn Las Vegas got there.

After team owner Rick Hendrick, sponsor Lowe's and crew chief Chad Knaus all received their due, Johnson took the podium to acknowledge those who had helped make his sixth title possible. 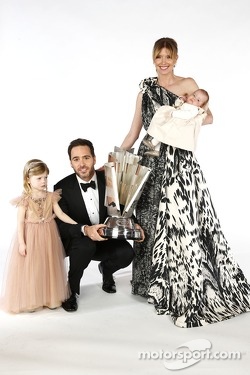 "Rick and (wife) Linda, you've created the winningest racing organization in NASCAR history by caring for the people you employ and treating us all like family," Johnson said after receiving his championship ring from NASCAR Chairman and CEO Brian France.

"And I'm honored to call myself a Hendrick employee."

Johnson thanked Knaus for pushing him to make him better and acknowledged the bond, both personal and professional, formed between driver and crew chief over the past 12 years.

Johnson's speech was the climax of the evening, but the humor that preceded it often brought the house down.

Comedian Jay Mohr, the master of ceremonies, revved up the crowd with some well-researched jokes that poked fun at Jeff Gordon, Danica Patrick and Clint Bowyer in particular.

Mohr highlighted Gordon's last-minute addition as a 13th driver to the Chase for the NASCAR Sprint Cup, after manipulation of the outcome of the final regular-season race at Richmond by Michael Waltrip Racing changed the course of the 2013 season.

Mohr surmised that Patrick, who was sitting close to the stage with her boyfriend, Sunoco Rookie of the Year Ricky Stenhouse Jr., might feel uncomfortable being so close to the front.

He congratulated Bowyer, whose late-race spin started the sequence of events at Richmond that led to a record $300,000 fine for the organization for being "so good at apologizing for things you may or may not have done."

The awards took a serious tone when the top-10 drivers began to review their accomplishments, thank their fans and congratulate Johnson on his milestone title.

Kurt Busch, 10th in the standings, recognized the collective effort of his single-car Furniture Row Racing team, which qualified for the Chase for the first time in the organization's history. Ninth-place finisher Greg Biffle gave a nod to sponsor 3M, which will mark its 10th season backing Biffle's efforts in 2014.

Eighth-place Joey Logano thanked team owner Roger Penske for "taking a chance on me." Logano rewarded that vote of confidence with a win at Michigan and a place in the Chase for the first time in his career.

Before seventh-place Bowyer took the stage, Mohr took a jab at Dale Earnhardt Jr., noting in a bogus tweet displayed on a screen above the stage that Earnhardt had asked the valet to park his car in Victory Lane, but that his GPS didn't know where to find it.

"Jay just learned with his last joke, that nobody laughed, at what everybody in NASCAR knows," Bowyer said. "Don't screw with Dale Jr."

Gordon also responded to Mohr when recognized for his sixth-place finish in the standings, noting that he had often considered opening his remarks with a joke, but found none of them funny.

"Then I realized that Jay Mohr has been doing that for years," Gordon said.

"Jimmie and Chad, and the entire 48 team, congratulations on your sixth title in eight years," Gordon said. "Individually, you are both one of the best at what you do. Together, you're a dominant force. Congratulations on another impressive year and another championship."

Gordon also addressed his 11th-hour inclusion in the Chase.

"We may have been a late addition, but I know in my heart we belonged in this year's Chase," Gordon said. "And we proved it every weekend throughout. Thanks to my team for never giving up."

Earnhardt, the series' fifth-place finisher, delivered his speech with an eye to the future, buoyed by his strong run in the Chase.

"As for our 88 team, we have seen a steady improvement each season we've been together," Earnhardt said. "That type of initiative is hard to find. It's my opinion that I spend my weekends with the hardest-working group in the garage. That type of attitude has made me not just a better driver but a better person as well.

"I think we as a group are thankful for each other. I look forward to 2014 with you guys and another year of getting better."

Kyle Busch, who finished fourth, welcomed the crowd to Las Vegas, his hometown.

"I've missed being up on this stage and being able to talk for the last couple of years," Busch quipped. "Even though I was gone for a while, not much has changed. Jimmie and Chad win the championship. Dale Jr. wins most popular driver.

"And (NASCAR President) Mike Helton's moustache is still the same… I'm not in the familiar spot of 11th or 12th and already on my way home -- I didn't even know the [Awards] lasted this late."

In his last of 13 NASCAR Sprint Cup seasons with Richard Childress Racing before moving to Stewart-Haas next year, third-place finisher Kevin Harvick took time to pay homage to his long-time car owner.

"Richard, we've been through a lot together over the last 14 years," Harvick said. "It seems like just yesterday I was this punk-ass kid that didn't know much about anything.

"Even though we didn't always see eye-to-eye, I honestly appreciate you allowing me to be the person that I am. I wish you and RCR all the best in the years to come."

Before Johnson took the stage, series runner-up Matt Kenseth, who moved from Roush Fenway Racing to Joe Gibbs Racing this season, offered his congratulations with a pointed suggestion.

"I will start by congratulating Jimmie, Chad, Rick and the 48 team … but, honestly, I have to say, your dominance is getting old," Kenseth said. "If I were you Jimmie, I would seriously contemplate retirement. Winning that much has to be tiring.

"Go buy yourself an island somewhere, hang out with your family, find a new hobby, spend some of that money and enjoy yourself."

But as usual, Johnson had the last word, as he and the No. 48 team prepare for a run at a record-tying seventh championship next year.

USAF Thunderbirds set to return to Daytona 500 for fly-over