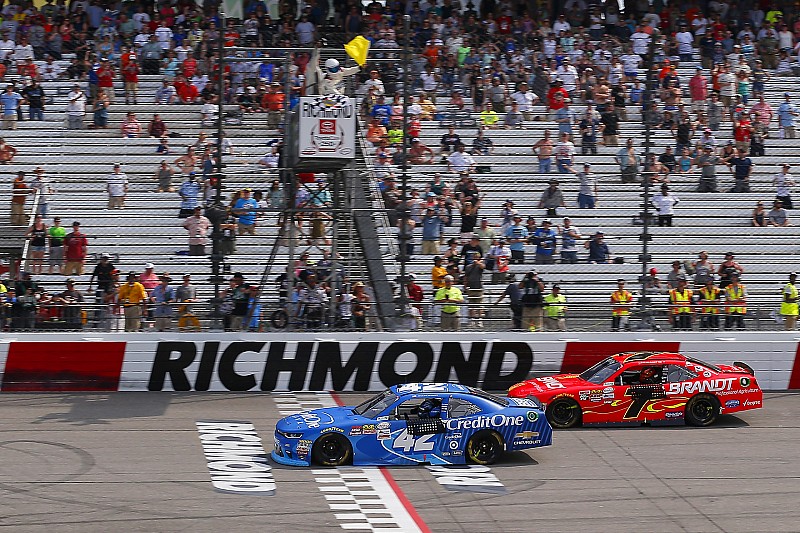 Did your favorite NASCAR driver receive a commitment line violation this weekend?

Were you confused about drivers racing to the flag under caution when Saturday’s Xfinity Series race at Richmond International Raceway went into overtime?

Scott Miller, NASCAR Senior Vice President of Competition explained some of the more curious moments from Richmond on SiriusXM NASCAR Radio on Monday.

Fans of Clint Bowyer, Aric Almirola, Danica Patrick, Reed Sorenson, Martin Truex Jr. and Kyle Busch took a blow at Richmond International Raceway when their drivers were busted during the final stage of the Monster Energy Cup race on Sunday.

Apparently, they missed the memo regarding NASCAR specifying the new guidelines for drivers turning into pit road.

Miller said it was necessary to make the parameters universal across the series so there was no confusion with an orange cone versus an orange box or two tires over the line compared with four tires.

“We’ve made it abundantly clear in all of the drivers meeting this year that it’s four tires below the orange box for the commitment line,” Miller said. “That was a change for Richmond. We kept stressing that the commitment line rule has changed. They got in the heat of the battle and obviously didn’t remember what we said.

“An unfortunate circumstance, but we make a rule, we have to live by it and officiate by it. That’s what happened yesterday. That’s no different than the extra timing lines, and the speeding penalties when we put that in. It’s just them trying to get used to something new seems to be pretty difficult.”

Saturday’s Xfinity race had some competitors wondering whether they should race to the line following the wreck involving Ryan Reed, Cole Custer and Matt Tifft on the backstretch. Kyle Larson had already crossed the overtime line — with the wreck behind — and he was declared the winner.

“The race was declared “in overtime” so what that means, if we have a restart as soon as the leader crosses the overtime line, the race is official,” Miller said. “And we put the yellow out. All of that transpired — the yellow lights came on like they always do. It happened really fast, and by the time the leaders got back to the start-finish line, our flagman still had the white flag in his hand and not the yellow.

“That was the source of some of the confusion, but it’s almost a little confusing for me as to how that created the confusion, because it’s been standard protocol for many years now that when the yellow lights come on, the track is under caution.

“So a little bit of a mistake on our part, not getting the yellow flag out quick enough at the start-finish line, but you think back at how the races go. If we have a caution that comes out and the leader is in Turn 2, he certainly doesn’t see the yellow flag at the flagstand. He sees the yellow lights and slows down. That’s what we’ve done for years.”

When the Xfinity Series rolls into Talladega Superspeedway this weekend, Miller says fans will continue to see some of the bump-drafting that has occurred in the past. However, following a test last year NASCAR changed the lower fascia on the cars to help eliminate some of the bumper to bumper pushing that occurred throughout the contest.

“They can still get there, but it’s not as simple as it was before we made the change,” Miller said. “That changed the look of the Daytona race a little bit, and we’re coming back to Talladega with that same thing.

“They’ll still be able to get on each other, and we will have to officiate it. You can bump, but you can’t lock bumpers and push. There’s a few of them that are very, very good at it. We go back and look at the videos, and it looks like they’re locked up. But when you look really close at the video, they’re just really close and tap-tap-tap. It’s hard to make those calls. It’s not the easiest thing to officiate from the tower. But we will do our best to get things right.”

Opinion: How NASCAR can get more fans in the stands