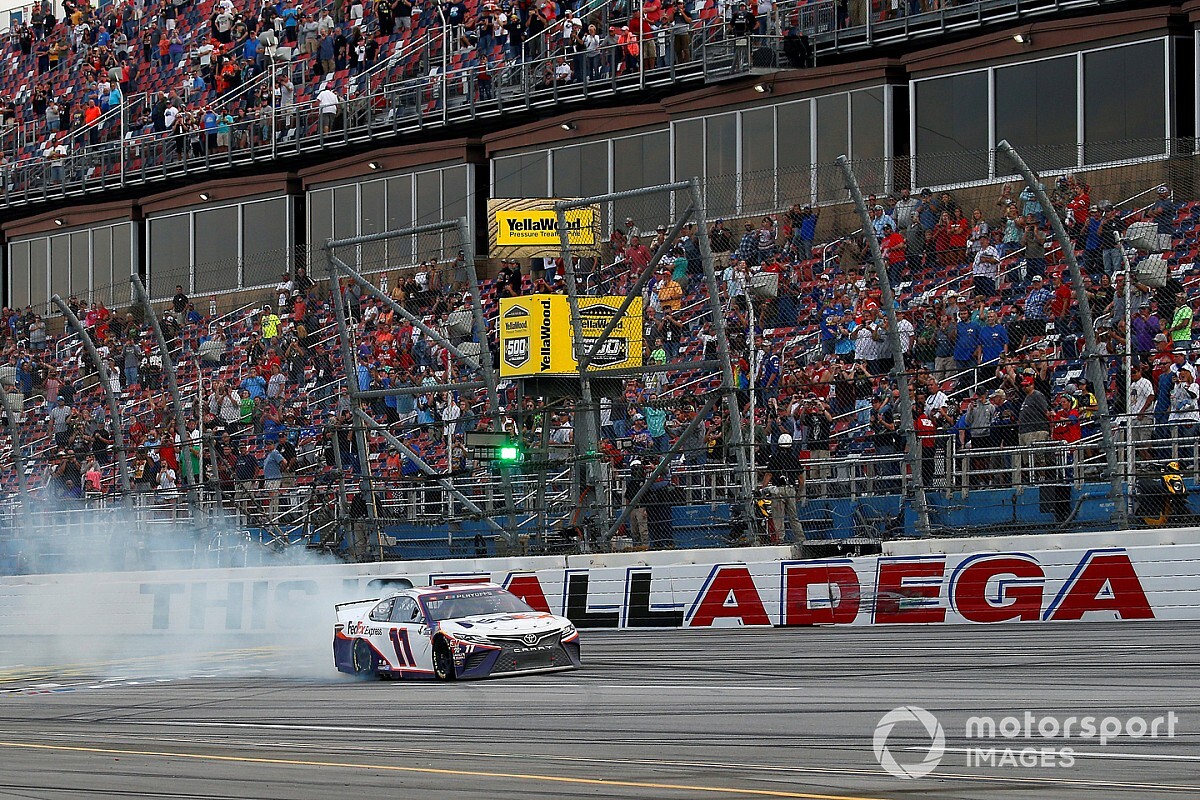 The Talladega finish ended in a bit of controversy Sunday with the yellow line rule at the center of the debate.

Denny Hamlin claimed the checkered flag, but the race finish fell under review for multiple reasons.

Hamlin's win was put into question as he went completely below the yellow line through Turn 4 and drew even with the race leaders as he re-entered the track. However, NASCAR did not call a penalty as they believed Hamlin was forced onto the apron to avoid an incident.

They did penalize second-place finisher Matt DiBenedetto, who forced William Byron below the yellow line as he attempted to a block his run on the final lap.

NASCAR also penalized Chase Elliott for a similar violation, but later rescinded the penalty and instead penalized Chris Buescher, who lost his sixth-place finish.

NASCAR senior vice president of competition Scott Miller explained the ruling on Hamlin and DiBenedetto, saying: "It was pretty clear‑cut. The 21 (DiBenedetto) hung a left, drove those guys down below the line. We called that twice on the 22 car (Joey Logano) during the race, so nothing different there.

On the 24 (Byron) and the 11 (Hamlin) being down there, I mean, in our judgment they were down there to avoid a wreck ... I think all of it was, from our vantage point, I think fairly clear‑cut."

Miller asserted that NASCAR will not consider eliminating the rule, believing "there would probably be even more wrecks. We certainly don't need more wrecks than what we saw today.  Probably not."

Sunday's race had a record 13 cautions and went into triple overtime.

Miller added, "Yeah, I mean, outside of putting a wall there, I don't really know what more we can do. I do sincerely believe we need the rule. You see all the real estate that's around here. If we started having cars running 12 wide down the back straightaway, imagine what would happen when you get to turn three.

"I think it's important that we continue to have a rule. You get out there in the heat of battle, things happen.  It's hard when there's all that real estate down there, but you just can't do it.

"I don't think that we can eliminate it. I think it would be a mess. We kind of are where we are."

Dale Earnhardt Jr., one of the most successful superspeedway racers in NASCAR history, disagrees. The racer-turned NBC broadcaster believes the rule should be eliminated as "I don't think it's going to crash more cars than we crashed today."

Matt DiBenedetto feels like "I'm always fighting for my life"