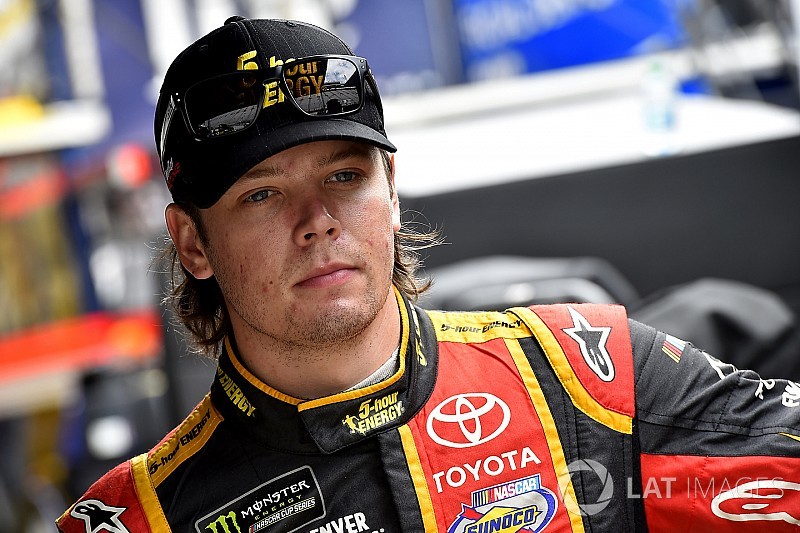 With his first Monster Energy NASCAR Cup Series pole in his pocket, Erik Jones looked to Saturday night’s Bass Pro Shops Night Race to add his first series victory and a trip to the playoffs.

He led a race-high 260 of 500 laps at Bristol Motor Speedway and his No. 77 Furniture Row Racing pit crew had one of its best races of the season.

But in the end, the rookie Jones lost out to a Bristol veteran and future Joe Gibbs Racing teammate in Kyle Busch.

“We raced hard all night and led a lot of laps and we did almost everything that we needed to do,” Jones said on pit road after the race. “I wish we had a little bit more. It was a great weekend for us, you can’t take that away.

“You still wish you would have had that little bit more to grab the win. That would have meant a lot to us.”

Jones has now set his series career-best finish in his last two races (he was third last week at Michigan) and he led more laps in Saturday night’s race then he had in the previous 23 races this season (50).

Jones was congratulated repeatedly over his team radio on his performance by his team and by JGR and FRR team members on pit road. JGR Denny Hamlin, who finished third, walked over to talk with him on pit road after the race as well.

Close, but still no trophy

Still, there was a sense by Jones that he left some unfinished business at Bristol.

“I’m proud that we’ve stepped it up so much on pit road and on the speed side of things, too,” Jones said. “The last two weeks, we’ve had really fast race cars and have had shots to win the race, we just haven’t quite had the situations work out.

“We gained spots on pit road all night. I don’t think we ever lost a spot. So, I’m proud of that but also frustrated that we couldn’t quite get it done.”

“I’m proud of him. It’s disappointing but I think it shows the talent level he has. They always say you have to lose one or two before you win one. I guess this was the first one we had to lose and that’s why it stings a little bit.”

With two races remaining before the 16-driver playoff field is set, Gayle doesn’t see any reason why Jones and his team shouldn’t look at them as two more opportunities for victories.

“He could win Darlington, Erik definitely has the talent to do it. He just has only one Xfinity start there,” Gayle said. “It’s a tough place for a rookie to go. And he definitely could win at Richmond. He certainly has enough laps at Richmond.”