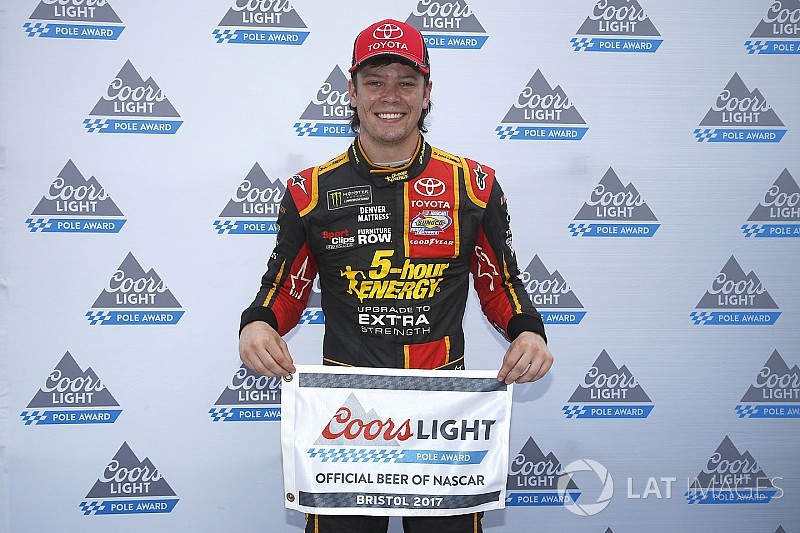 “It’s cool any time you get your first pole in the series, but to get it at Bristol, is really cool,” Jones said.

"We had a good week last week. We’ve done a good job of keeping the momentum going so far. Hoping for a good day tomorrow night. Obviously, real excited to get the race going now and see what we can do.”

Kenseth was the first driver to roll out on the track with four minutes remaining in the final session. He established a quick lap of 120.429mph on his first lap and improved to 127.563mph on Lap 2. Kenseth ran a third lap but didn’t top his second circuit.

Blaney was the second qualifier followed by Clint Bowyer, Jamie McMurray and Chase Elliott with two minutes on the clock. Blaney ran second followed by McMurray. Elliott vaulted to second on his second lap.

Kasey Kahne posted his first lap with less than a minute to go. His time atop the leader board was short-lived as he was bumped by Kyle Larson — who was then knocked off by Erik Jones.

Truex was the last car on the track and babbled in Turn 3. He settled for sixth.

Jones was thrilled with the benefits of the pole — including a primo pit box and initial track position.

Denny Hamlin was the fastest qualifier in the second round.

Again, the drivers waited for the optimum time to make a run. Larson, Keselowski, Truex sat on the backstretch with 10 minutes on the clock.

With just over eight minutes on the clock, Larson made his qualifying run and posted a lap of 127.563mph — after running the top of Turns 3 and 4. Kenseth was second on the track and topped Larson with a speed of 128.434mph. Larson made another run but only improved to 127.707mph.

Jimmie Johnson, Austin Dillon and Kyle Busch made their attempts just under the six-minute mark. Dillon was third (126.896mph). Busch’s car was squirrelly in Turns 3 and 4. Ryan Blaney shot up to second on his run with four minutes remaining, Newman, Truex, Jones, Keselowski, Suarez and Kahne made laps with three minutes to go — but couldn’t top Kenseth.

Kenseth, Jones, Suarez, Elliott and Blaney were in the top five with two minutes to go but Logano vaulted up to third with a lap of 128.074mph. Hamlin bumped Kenseth with just over a minute remaining after posting a lap of 128.632mph.

Busch, who was 21st on the speed chart, made a second attempt along with Keselowski, Stenhouse and Truex. Busch’s best effort mustered a lap of 126.712mph — 18th quick. Keselowski finished one position better. Truex, however, jumped to 12th — the final spot — with a lap 127.225mph.

Ryan Newman was the first driver bumped and will start 13th.

Kyle Busch posted the fastest lap in first round of qualifying with a speed of 129.921mph.

Prior to qualifying, NASCAR told teams they could line up on the backstretch pit road for the first round. McMurray, Kenseth, Truex Jr., Blaney, AJ Allmendinger, Chris Buescher, Kurt Busch, Trevor Bayne, Hamlin and Ryan Newman were in line when the 20-minute trial began.

Kurt Busch was the first driver on the track. He established a time of 16.762-seconds (114.473mph). Joey Gase was the second car out and was considerably slower than Busch (103.295mph). Eighteen cars remained on pit road, waiting for a cloud to cover the track with 15 minutes remaining on the clock. Reed Sorenson made a lap of 107.436mph as 38 cars sat.

Jeffrey Earnhardt was the fourth car to make an attempt with 10.5-seconds to go. He went to the provisional pole with a lap of 120.793mph. Corey LaJoie set a lap of 124.170mph with nine minutes remaining. Kyle Larson was next on the track with a speed of 127.682mph — and jumped to the top of the board. Dale Earnhardt Jr., completed his first lap with eight minutes to go followed by Bayne, Ryan Newman, Austin Dillon, Matt DiBenedetto, Allmendinger and Michael McDowell. With seven minutes remaining, Kurt Busch returned to the track as Jimmie Johnson and Kevin Harvick made first attempts.

With four minutes on the lock, Suarez, Hamlin, McMurray and Stenhouse took to the track with Kyle Busch, Elliott, McMurray, Truex and Jones rounding out the top-five speeds.

Danica Patrick posted the 22nd fastest lap on her first run with three minutes remaining. Earnhardt, who dropped to P30, returned to the track but told the No. 88 Hendrick Motorsports team, “I can’t run any faster.”

With a minute on the clock Bayne, Menard, Landon Cassill, Almirola, DiBenedetto, Buescher and Allmendinger returned to the track.

Bayne jumped up to 16th and bumped Kurt Busch, who told his crew after completing 10 laps, “That’s a shame.”

The JTG-Daugherty Chevys of Buescher and Allmendinger, who were 21st and 22nd, respectively, moved on. Patrick picked up the 24th and final position.