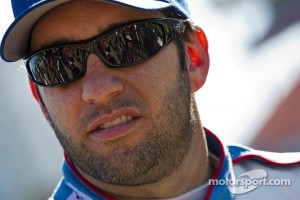 (10/26/11) Mooresville, N.C - Hermie Sadler will be piloting the No. 71 HOMESMART Ford Fusion this weekend as the NASCAR Sprint Cup Series heads to Martinsville, Virginia for the running of the Tums Fast Relief 500. Sadler has driven the No. 71 car on two occasions this season and earned a 28th place finish at Martinsville earlier this year.

Sadler is excited about the opportunity to be back behind the wheel as it'll be a homecoming for the Emporia, VA native.

"It's always great to get the opportunity to race at home. I want to try extra hard this weekend to get a good finish for my hometown fans and our new sponsor HOMESMART. This is a track where I grew up watching races and a strong finish here would mean a lot to me. Racing in the Sprint Cup Series is always a blast. These are the best drivers in the world. Being behind the wheel allows me to gain information that I couldn’t get any other way. I can then take that information and relay it to the fans watching at home on TV. It will be a busy weekend, but I couldn’t think of a better opportunity to get back behind the wheel."

Sadler is an experienced veteran with a pair of NASCAR wins. Many know him best for his role as a commentator and analyst on SPEED. He has become a staple of the pre-race show, NASCAR Raceday and can be found on a number of the network's other broadcasts. He plans to pull "double-duty" this weekend as he will drive the No. 71 car in addition to his SPEED duties.

"We are thrilled to team with TRG Motorsports and to be part of the NASCAR Sprint Cup series action at Martinsville Speedway this Sunday. As one of the fastest growing specialty retailers of furniture, appliances, electronics and computers in the U.S., this partnership will allow us to introduce our business to NASCAR fans nationally and compete at the sport's highest level. We look forward to Hermie bringing HOMESMART to the checkered flag Sunday."

Team owner Kevin Buckler points out how excited he is about having Hermie back in the car and our new sponsor HOMESMART on the No. 71

"Not only is Hermie a talented driver, but he is a likable personality with a large following. We love working with him. This weekend will be a great opportunity for our new sponsor HOMESMART to not only have access to on-track exposure, but to spend some of the weekend with Hermie to help launch some or their smart shopping opportunities and full line of brands. Our team has a lot of potential and we are glad to be working with the combination of Hermie and HOMESMART to help us maximize our performance."