Brad Keselowski will honor a North Carolina native as all NASCAR Cup Series drivers will carry the name of a fallen soldier on windshield during Sunday’s Coca-Cola 600. 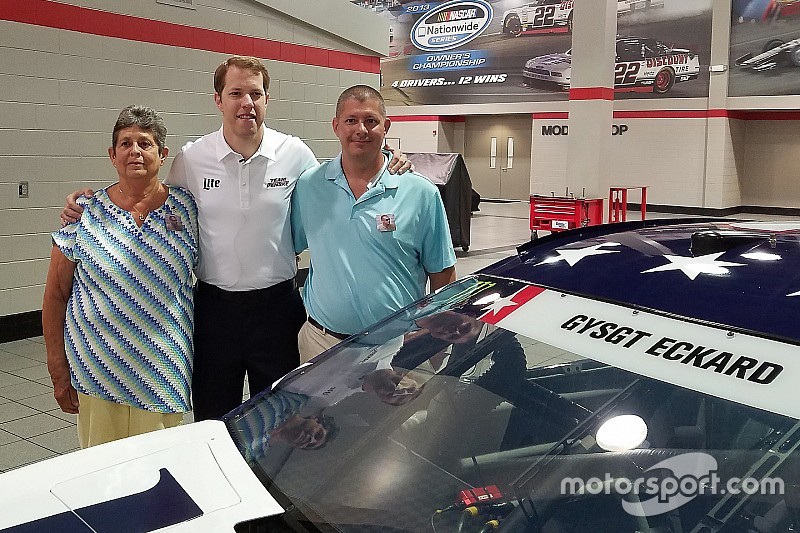 While Keselowski and 39 other drivers will be focused on trying to win the Coke 600 Sunday at Charlotte, before they take the green flag they will recognize and honor some of America’s fallen soldiers.

The 600 Miles of Remembrance program has been held annually as part of the Memorial Day events at Charlotte since 2015.

Keselowski, who has long been a part of supporting America’s military members and veterans through his Checkered Flag Foundation, said it’s a great privilege and honor to help recognize the men and women who’ve paid the ultimate price for their country.

“You always wish you could do more,” said Keselowski. “Memorial Day is an important time to reflect on the life we get to live because of the sacrifices made by so many.

“It’s a big honor to help in a small way recognize those who have made the sacrifice and and it’s an honor for use to carry their name on our car. The best thing we can do is help honor them and their memory.”

Keselowski will carry the name of Gunnery Sergeant (GySgt) Chris Eckard from Hickory, N.C. GySgt Eckard was killed on Feb. 20, 2010 near Patrol Base Barcha in the Helmand Province of Afghanistan while conducting EOD operations in the support of a dismounted patrol.

It was his fifth tour of duty when he suffered his fatal injuries.

Chris Eckard’s dad also has a history in NASCAR working for Junior Johnson years ago and also being a part of teams that competed at Hickory Motor Speedway.

“It means everything to these families that have lost soldiers and this should mean a lot to our country for the sacrifices they made for our country,” said Chad Eckard. “We can’t thank Brad and his team and everyone here (at Team Penske) for what they’re doing to keep Chris’ memory alive over Memorial Day.”

“Ever since he was little kid he wanted to be a Marine,” Eunice Eckard said of her son. “I didn’t want him to re-enlist but he always said ‘Mom I can’t think of a better way to die than die for your country.’

“Well, my response was give me grandchildren, and he did.”

Casey Mahoney, who was Chris’ best friend and best man at his wedding, works at Team Penske and nominated his late friend to be a part of the program.

“The dedication that he had and being an outstanding soldier to help save other people’s lives,” said Chad Eckard. “He wanted to be the best Marine he could be.”

Chris Eckard is survived by his wife of eight years, Ashley Eckard, and their two sons, Steven and Avery.

Chad and Eunice Eckard will join other families that will attend the race on Sunday and be recognized during pre-race ceremonies.

Here’s a complete list of the fallen soldiers to be represented on Sunday and the drivers and vehicles that will carry their names: