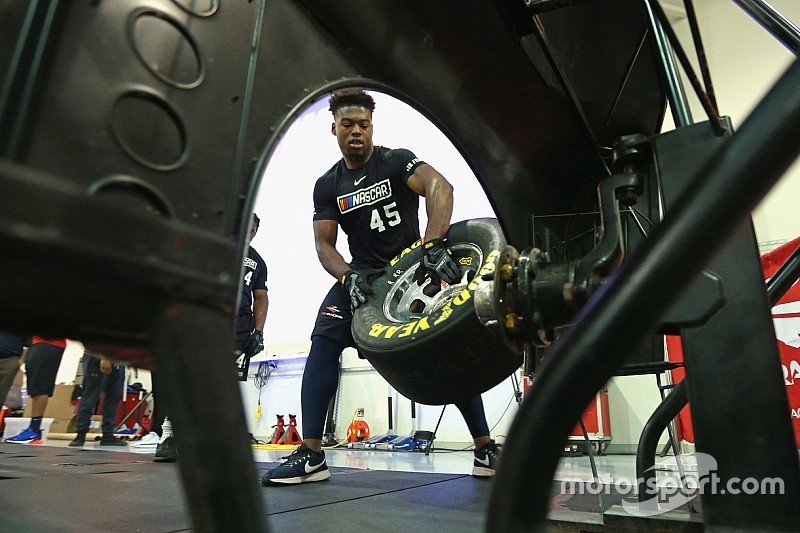 Seven top performers from national combine tryouts have been selected to participate in program at Rev Racing starting next month.

Following a national talent search and annual combine event in May, NASCAR and Rev Racing have selected the latest participants in the NASCAR Drive for Diversity Pit Crew Development Program.

Seven former collegiate athletes were selected based on strong, individual performances during a series of crew member assessments and strength and agility drills at the NASCAR Drive for Diversity Pit Crew Combine in Concord, N.C. on May 25.

NASCAR Drive for Diversity provides opportunities for multicultural and female athletes to “go pro” in NASCAR following college careers in football, basketball, track and field, and other sports.

This year’s participants will relocate to North Carolina and train as tire-changers, carriers and jackmen with Rev Racing with hopes of joining more than 50 NASCAR Drive for Diversity alumni working in the sport’s national series.

“We believe these athletes have what it takes to compete on pit road in our national series like so many of our NASCAR Drive for Diversity graduates.”

Brandon Banks is among the new NASCAR Drive for Diversity pit crew participants. Banks starred as a defensive lineman at the University of North Carolina at Charlotte and was part of the Washington Redskins’ active roster in 2017.

A pair of former North Carolina A&T State University student-athletes, Joshua Patrick and Keiston France, were also selected for the pit crew program. Patrick played football for the Aggies, while France was a member of the school’s tennis team.

In September, the seven athletes selected to the program will begin 12 months of pit crew training with Rev Racing.

“We look forward to welcoming this year’s class to NASCAR’s most comprehensive pit crew training and development program,” said Max Siegel, CEO of Rev Racing. “Coach Phil Horton and the Rev Racing competition staff continue to attract the top emerging talent in the country and produce some of today’s most successful crew members.”

Since the pit crew program’s inception, more than 90 athletes have participated in NASCAR Drive for Diversity with 25 currently working at the Monster Energy NASCAR Cup Series™ level.

Daniels, who joined the diversity program in 2016, is believed to be the first female African-American crew member to compete in the sport’s top series.

The new participants in the NASCAR Drive for Diversity Pit Crew Development Program include: