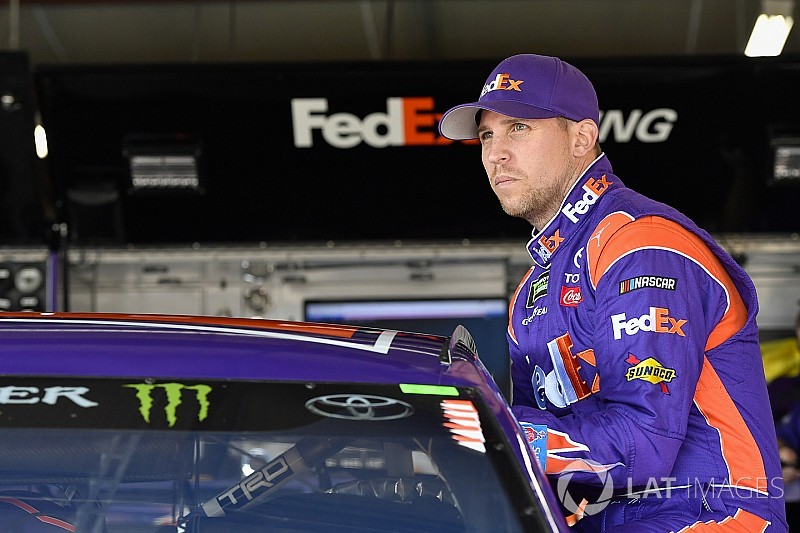 “I was loose in then banging the splitter pretty bad,” Hamlin said after completing 43 laps “It’s loose in at the two-thirds mark by a mile.” Hamlin posted 56 circuits during the 85-minute session

Jones moved up to the top of the board with a lap of 128.142mph after six laps. Johnson was third (127.997mph) after four laps. Stenhouse, Elliott, Kahne Blaney, Chris Buescher, Suarez and Ty Dillon rounded out the top 10 at the 15-minute mark.

Kyle Busch laid down the fastest lap (128.485mph), 17 minutes in the session. His Toyota teammates Jones and Hamlin remained second and third, respectively.

“Overall grip is pretty good, a little loose in, a little tight middle,” said McMurray after breaking into the top 10 with a lap of 127.792mph after 12 laps. “We need to work on the entry to start with. I’m a little bit guarded which hurts the middle.

Twenty-minutes in, Blaney bumped Kyle Busch to second with a lap of 128.917mph. Hamlin, Jones and Stenhouse rounded out the top-five single lap speeds. Matt Kenseth vaulted up to third with a top speed of 128.356mph after his 11-lap run — just before the 25-minute mark.

Kahne climbed to the top spot with a lap of 128.943mph, twenty-five minutes in. He was passed by Kyle Busch (129.221mph). Two minutes later, Larson triggered the red flag after spinning off of Turn 4. He had just completed 11 laps and was 21st on the speed chart.

A couple minutes later, Hamlin jumped to P1 with a speed of 129.230mph. He held the top spot until caution came out for rain just before 50-minutes in. Kyle Busch was second followed by Kahne, Blaney, Bowyer, Kenseth, Truex, Jones, Stenhouse and Johnson.

NASCAR resumed practice 55-minutes in. Forty-one cars posted speeds. After the first hour, Johnson’s 45 laps were the most completed. His top speed was 127.997mph.

Dale Earnhardt Jr. - "What in the hell is going on in this world?"