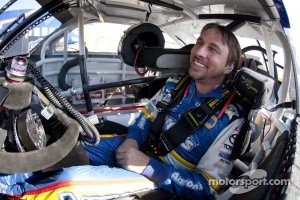 CORNELIUS, N.C. — No. 00 Aaron’s Dream Machine Toyota interim car chief Chris Hall knows his way around the Dream Machine as well as anyone. Hall, a Michael Waltrip Racing mechanic since 2007, spent the last two seasons as front end mechanic for the No. 00 and also goes over the wall on race day as the front tire carrier. Prior to working on the Aaron’s Dream Machine, the Springfield, Mo., native spent two and a half seasons as the front end mechanic and tire carrier on the No. 55 NAPA Toyota driven by team owner Michael Waltrip.

Hall, nephew of former Sprint Cup crew chief James Ince, moved from Springfield to the Charlotte area in 2003 to pursue a career in racing. Hall caught on with Bobby Hamilton Racing and moved to Nashville, Tenn. to pursue his passion. In 2004, Hall returned to North Carolina to work for Bill Davis Racing in the Truck Series for a season. His first position in the Cup Series came with PPI Motorsports working on the No. 32 Tide car with drivers Bobby Hamilton Jr. in 2005 and Travis Kvapil in 2006.

CHRIS HALL ON RACING: “Racing is all I’ve ever done. I started with my Uncle James’ (Ince), father and my grandpa, we call him Pa, but they just always had us race - all the time. I’ve been at a race track working on cars from as far back as I can remember.”

ON WORKING AS CAR CHIEF: “Between (car chief) Steve Channing and I, we normally just work together, so hopefully this won’t be too much of a stretch. We are the ones that take a look at what needs to be finished and what needs to get done and we go to work to make sure it’s good to go. I know what Steve likes to see in a car and know what needs to get done. We are going to miss having him around and it’s a loss for the team, but I’m confident that nothing will slip through the cracks. I work on race cars for a living—which in my mind is the best job in the world.

“We have a really good group of guys who know how to do it all. Steve’s loss is going to hurt, and losing Rodney (Childers) for the rest of the season is not something that any of us like or are happy about, but it’s not something that this team can’t overcome.”

ON WORKING WITH BOBBY KENNEDY: “Bobby Kennedy is a great guy and he knows the position. We’ve worked together in the past. He was the crew chief on the 55 when I was working on that team and he is as straight forward as it gets. Bobby definitely lets you know where you stand and he expects that everything is perfect.”

WHAT WILL BE THE BIGGEST ADJUSTMENT: “For me I think it will be the note taking side of things. We are adding Ray Holm to the team for the rest of the year who is going to fill in for me as the front end mechanic and an extra set of hands. Ray’s been working on our Nationwide team for a while, so he’s not a new guy, but it’s always an adjustment having someone fill in on the road when you are used to working with a set group of guys. I think having to communicate with (race engineer) Dax Gerringer a little more and some of the little things like that will be the biggest adjustment.”