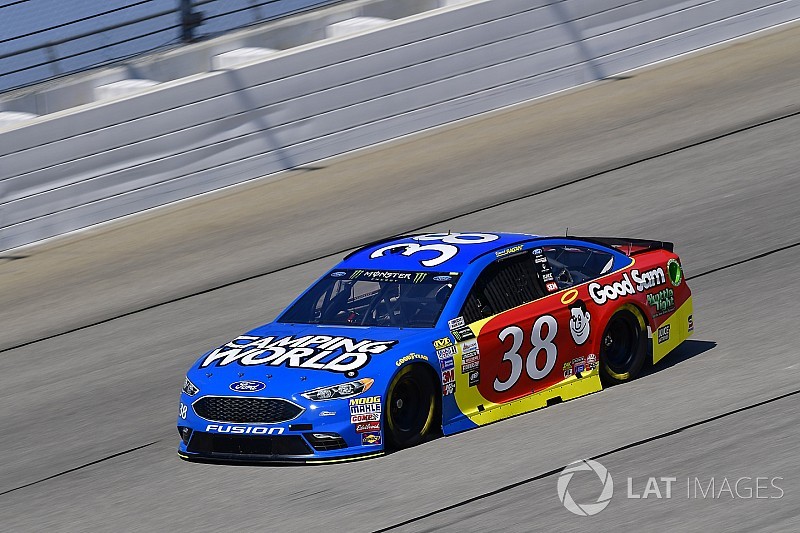 Front Row Motorsports has won races in the Monster Energy NASCAR Cup Series but driver David Ragan believes the time is right for the organization to become a “consistent contender.”

FRM and owner Bob Jenkins have fielded entries in the Cup series since 2005, amassing 814 starts. The organization won its first race in 2013 with Ragan and added another victory in 2016 with driver Chris Buescher.

What FRM has found elusive is the ability to run up front consistently, with only 14 top-10 finishes in those 800-plus starts.

Ragan believes that could change this season.

“It is a long hard process to turn from a startup team into a race winning team, which Front Row has won a couple races, to be a consistent contender for top-10 and top-15’s. That is our next goal,” Ragan said during the Charlotte Motor Speedway Media Tour.

“We are up against Penske and Hendrick and (Richard Childress Racing) and Roush Fenway that have been around the sport for 25, 30, 35 years. Front Row has only been a full-time team for nine seasons and I am embracing working with Bob Jenkins and our group to try to get better.”

Ragan, 32 and now on his second stint with the organization as a driver, sees Furniture Row Racing’s Cup series championship in 2017 with driver Martin Truex Jr. as a potential path for success for FRM.

FRR has been either a one or two-car organization in its young tenure and has a technical alliance with Joe Gibbs Racing, including providing the team engines and chassis.

“I think what Furniture Row Motorsports did last year is kind of a shot in the arm to some of these smaller, newer teams in the last 10 years,” Ragan said.

“As the tides continue to turn in our sport that over the next 10 years, I think Furniture Row, JTG (Daugherty), Front Row, Stewart-Haas Racing – some of the newer teams in our sport – will take the place from some of these more established teams.

“I don’t know how or when that is going to happen but our sport has always had that turnover every 20-25 years and I think in the next 10 years you are going to have some more turnover.”

Each year that goes by sees FRM seemingly take another step in the direction of more successful organizations, whether it be with increased sponsorship or support from its manufacturer, Ford Performance.

“For Ford to believe in Front Row Motorsports and to have an appreciation for what Bob Jenkins has done financially the last seven or eight years has been special. For us it means more engineering support,” Ragan said.

“Some of it comes in cash and some of it comes in resources – more wind tunnel time, a closer relationship with our big brother, Roush Fenway Racing. They have a lot of tools that over the years we haven’t had access to.”

This year, FRM will field both Ragan and Michael McDowell in full-time entries in the Cup series. McDowell spent the past four seasons with Leavine Family Racing, on much the same path in development as FRM.

“It’s been awhile since I’ve had a teammate, so I’m really looking forward to working with David, whom I’ve become pretty good friends with over the years,” McDowell said.

“As a team now, we go into the season knowing we have five or six races that put us in position to get a win and earn a spot in the playoffs.”

With more resources there will also come higher expectations.

“Our engines should be more on par with what our Ford teammates have had in years past and I think that with that comes the extra pressure from the drivers and crew chiefs,” Ragan said.

“We have to elevate our game a little bit to make something happen with the extra resources that we have.”