Dale Jr. is done competing full-time, but not done racing 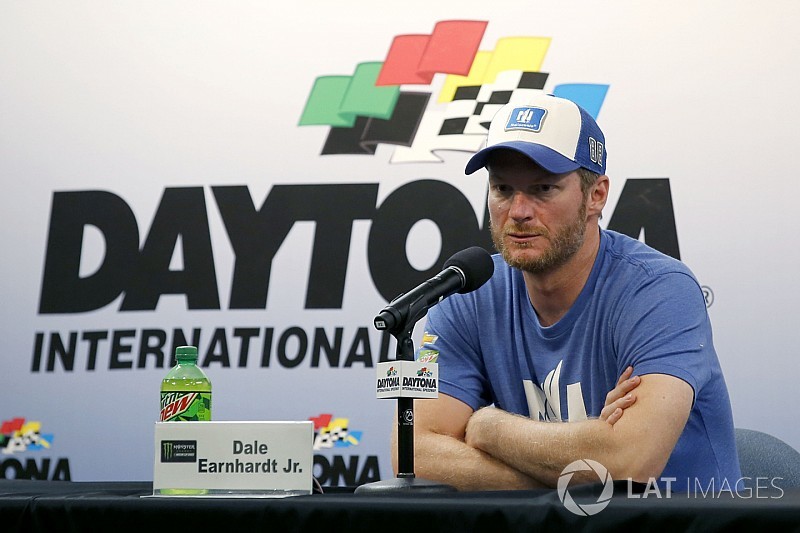 Daytona International Speedway would like you to believe this Dale Earnhardt Jr.’s final hurrah in the Coke Zero 400.

NASCAR’s Most Popular Driver is scheduled to retire from full-time competition in the Monster Energy Cup Series at the end of this season, so that premise might appear to be logical.

But if this week is any indication, Earnhardt remains indecisive when it comes to what life after full-time racing might look like. He was definitive about watching the 2018 Daytona 500 from the sidelines — not from behind the wheel. Beyond that, his racing future is still TBD.

“I don’t really know,” Earnhardt said. “I definitely want to leave the door open to any opportunity. Somebody may need me to come in and help. I’ve seen Tony (Stewart) needed some help and guys that have come out of retirement to help. Jeff (Gordon) did that for us last year. I wouldn’t be opposed to helping somebody if they needed some help.

“I feel like I’m done full-time. I feel comfortable about that choice. But I am going to run two to six Xfinity races for — I don’t know how many years — to try and continue to grow JR Motorsports and keep it healthy. Will that be enough to keep me happy? I don’t know. We’ll see, but I don’t think there will be opportunities in good cars to come out and do it.”

As the season finale at Homestead-Miami Speedway looms closer, Earnhardt says he doesn’t regret his decision. It did not happen in the spur of the moment. His multiple concussions solidified his choice. Earnhardt is just trying to find the necessary balance between his day job and the retirement tour — and savor every moment in between.

“As far as my driving career, I just want to make sure that I have the opportunity or take the opportunity every chance I get to thank people for making this so much fun. So there is a little bit of anxiety there. Am I doing that? I am also trying to race; trying to win; trying to get in the Chase and trying to fulfill all the responsibilities to Greg (Ives, crew chief) and being accountable and available to him. There is still a lot of work going on.”

Understandably, Earnhardt’s relationship with Daytona is complicated. His father, Dale Sr., is the winningest driver at the track. His father also lost his life on the 2.5-miler in 2001. Earnhardt won his first Cup race at the track when the tour returned in July, his first of four victories.

“Daytona has been so important to NASCAR,” Earnhardt said. “The Daytona 500 is so important to our sport and the health of our sport. A lot of great things have happened here. A lot of drivers have made their careers here. It is something to be proud of if you are in the industry. It is something proud of. It is a pretty fun race track. It is going to get its character back.

“This was a great, great place to race in the early 2000s.The repave changed the track quite a bit, but I’m sure some drivers loved it then. Not to say it changed it for the worse, but as they say, as a track ages, in my opinion, it just gets better and better as the grip goes away and handling becomes more important. It is a very fun track; a challenging track even though it is a superspeedway and we kind of run wide open. When the handling becomes an issue, you can’t run wide open. You have your hands full. I appreciate and admire that about the track…A lot of great history here.”

When it comes to his own personal success at the track, Earnhardt graciously credits the cars he’s been given to drive. From his early days at Dale Earnhardt Inc. to his current run at Hendrick Motorsports, the driver believes with the cars he had to drive he probably should have won more races.

“When I get the car that I need or when I’ve had the cars that I have had that were so good here, you could just do whatever you wanted with them,” Earnhardt said. “If you know a little bit about what you are doing, you can make some things happen and control the race. I say that because I have had some races here that I haven’t had the car that I felt that I needed – me personally. And, I know without that kind of a race car, I don’t feel confident in getting the job done. The car has always been really critical.”

After a few single-lap runs followed by drafting practice, Earnhardt knows whether his car will be dialed in for the race at Daytona. In Happy Hour, he topped the speed chart on Friday. Does Earnhardt believe he has a machine that can carry him to Victory Lane in Saturday’s Coke Zero 400?

“It either surprises you – I had my car yesterday do a couple of things that I thought ‘Wow, this is all right’,” Earnhardt said. “Sometimes you go out there and practice that first practice and you are a little underwhelmed, and then you are kind of concerned and you work on it, and hopefully improve, but sometimes you don’t. You take a car like that into the race, it is just hard to be confident in making choices and making moves and being on the offense and doing stuff all the time.

“When your car is really, really strong, you’ll try any run you get because you just know that if it doesn’t work, it’s not going that bad; you are not going to fall back too far. There’s not a whole lot of risk in trying whatever you want to try. So the cars are a big part of it.”