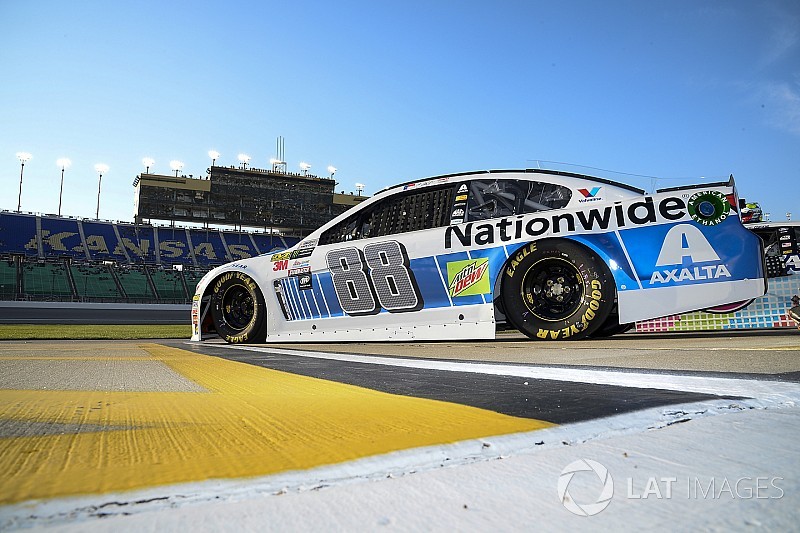 Earnhardt’s father befriended Yost when he was an assistant with the Atlanta Braves. Yost spent off-seasons assisting the No. 3 Richard Childress Racing team and still sports the No. 3 on his jersey. He became a regular hunting buddy and companion to the seven-time champion.

And Yost remembers riding around on the Earnhardt’s North Carolina farm in 1997 and Senior telling him Dale Jr. was graduating full-time to what was then NASCAR’s Busch Series. He questioned the elder Earnhardt as to whether the 22-year-old kid was ready for that.

Now, that kid is having a child of his own. Earnhardt announced on Monday that he and wife Amy are expecting a daughter — and he is absolutely beyond giddy. The driver of the No. 88 Chevy could barely contain himself as he described hearing the heartbeat for the first time.

“Oh, I’ve got a little film of it on my phone,” Earnhardt said. “We just busted out laughing. It was great. I mean it made it more real. We are pinching ourselves even still. We look at each other if we’re sitting on the couch or walking around the house or something and just have to remind ourselves we’re going through this pregnancy and we just can’t believe it. So, anytime you hear the heartbeat or go to an ultrasound or something like that, it makes it like hey, it’s happening. You get a little scared. You get excited, you know?

“We went for a checkup and Amy took a couple of tests and the tests were saying she’s pregnant. We went to the doctor and I’m still thinking man, I’m not believing crap until this doctor tells me. So, we’re sitting in there for like 20 minutes. And their talking woman language and I’m not understanding. They are just talking about things and I’m like well, when is she going to say it? I want to hear it from the doctor’s mouth.”

He laughed again then continued, “That she’s pregnant, so we can rejoice. It took them a while. I was scared to speak up. Finally, they said something that confirmed it for me and I was like, awesome. And then we had the ultrasound and got to hear the heartbeat and all that right there, and that was great. We go back for another checkup here soon, in a couple of days, and those are awesome. They are so much fun because it’s like the closest you can get to it before they’re born and I’m looking forward to each and every one of them.”

The new development has offered Earnhardt a different sense of purpose. In what will be his last full-time season in NASCAR’s Monster Energy Cup Series, Earnhardt wants to make the most out of his final five races.

Earnhardt was fast off of the truck on Friday in practice. Despite easily transferring to the second round of qualifying, he just missed his line and will start 19th in the Hollywood Casino 400. Although Sunday will mark his final Cup start at the 1.5-mile track, the circuit has become one of Earnhardt’s favorites on the tour despite the challenges that Kansas Speedway presents.

“As a driver, we love having so many options in the corner and this place just gives you everything,” Earnhardt said. “This place just opens itself up to whatever you want to try. It’s the perfect scenario as far as multiple grooves and you know it’s not just fast at the top as the track builds rubber. The middle stays relatively competitive and so it’s not like you just only have one, it’s not like you run on the bottom all weekend and then everybody moves to the top at some point and that is it. The track really stays competitive all the way across the board.

“It was a great track before they reconfigured it. It is still a great track. I think the asphalt they used, how it’s aged, how well it has held up to bumps and so forth. We have a tunnel in Turns 3 and 4, there is no bump there, there is no frustrating issue like you have at a lot of tracks with bumps in the tunnels and stuff. This place is just built so well and it’s really just widened out. It’s such a fun race track. Really look forward to coming here and racing here, but the wind is a bit of a curveball that you don’t deal with at most of the race tracks or at some of the race tracks.