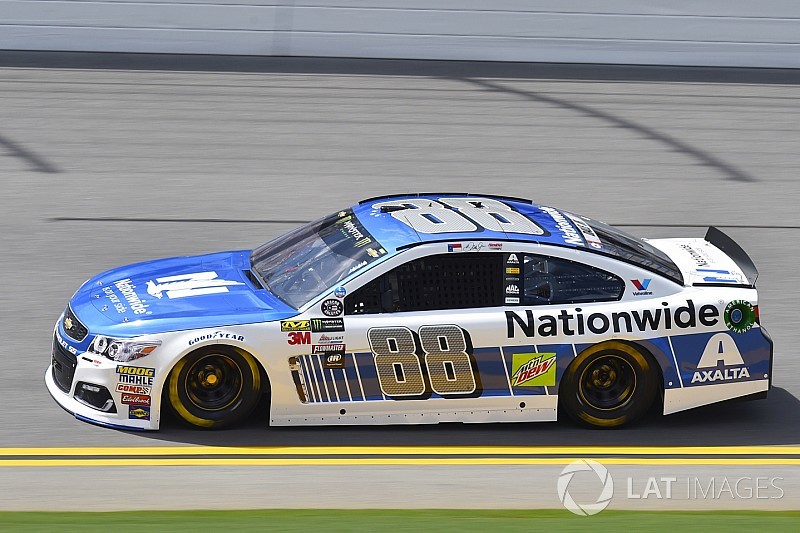 Dale Earnhardt Jr. won the pole for the Coke Zero 400 at Daytona International Speedway on Friday.

Earnhardt, who posted the quick lap in Round 1, doubled-up in the final round with a lap of 190.973mph.

“Awesome, finally,” Earnhardt said after topping his teammate Chase Elliott. “It’s like the 15th time is the charm.”

When Earnhardt was asked about whether he would consider returning to Daytona in February to run the Clash, he said, “Yeah, absolutely, I’ll talk to my bossman Rick (Hendrick) and see if we can come back and have some fun.”

For Earnhardt, it was his second pole at Daytona and his 14th career Cup pole overall.

Jimmie Johnson established a lap of 189.450mph as the first driver out in the second round of time trials. He ended up 12th. Jamie McMurray bumped Johnson with a speed of 189.849mph.

Danica Patrick, the third Stewart-Haas Racing Ford, ran a 189.633mph — temporarily good for third, until  Blaney replaced her with a lap of 189.785mph.

Keselowski took the top spot with a lap of 190.287mph with a solid run through Turn 3.

“I think what we have for tomorrow night will be better,” crew chief Paul Wolfe tells Keselowski.

Kasey Kahne, who was looking for a solid run, was the first Hendrick Motorsports Chevy to take a time and ended up second — 47-356-seconds (190.050mph).

Ricky Stenhouse Jr.’s lap of 190.006mph held up for fourth on the speed chart.

Joey Logano struggled getting through Turn 4 and ended up fifth (189.921mph).

“Getting closer,” he told the No. 22 Team Penske squad

Chase Elliott secured a front-row seat for Saturday with a lap of 190.795, knocking Keselowski off the pole.

And he did.  Earnhardt wasn't going to be denied in his final run in the Coke Zero 400.

Click on image below to watch highlights of Dale Earnhardt Jr. winning the pole at Daytona on Friday.

Dale Earnhardt Jr. posted the top speed in the first round of qualifying for Saturday’s Coke Zero 400.

“The car had speed,” Logano said. “That’s a great accomplishment for our team.”

Kahne’s Hendrick Motorsports teammate — and two-time pole winner — Chase Elliott bumped the No. 5 with a speed of 190.751mph. Five drivers later, Earnhardt Jr. captured the top spot with a lap of 190.852mph.

With six cars remaining to take times, Stenhouse Jr., who won his first Cup race at Talladega Superspeedway in the spring, jumped up to third (190.186mph). Blaney followed by posted the fifth fastest time — 189.765mph. Logano’s Ford bumped both drivers with a lap of 190.283mph for third.

Dale Jr. is done competing full-time, but not done racing