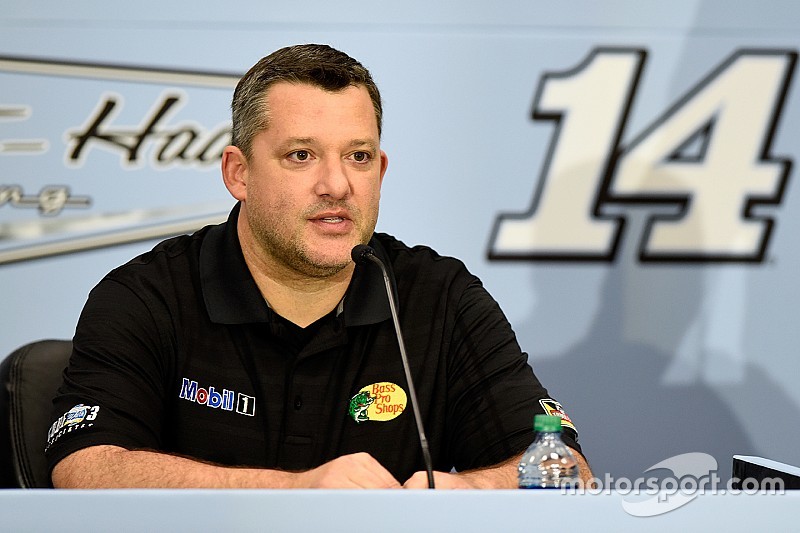 Tony Stewart announced on Wednesday that he will end his NASCAR Sprint Cup career at the conclusion of the 2016 season.

Following the announcement, members of the NASCAR community released statements and took to social media to offer their thoughts on Tony and his impact on them/the sport.

“When I think of Tony Stewart, unmatched passion and a pure love of the sport come to mind. He has won championships and millions of fans. But he has given back so much more, and that’s what I admire most. Today’s news was bittersweet for all, but we know Tony will continue to be a big part of our sport in his roles as a team and track owner. On behalf of the entire NASCAR family, I thank Tony for his many years of excellence and competitiveness, and wish him nothing but the best in his final season as a driver in the Sprint Cup Series.”

"The Indianapolis Motor Speedway has seen many talented drivers compete over the last 106 years, but very few possessed the ability to be competitive in every aspect of the sport like Tony Stewart. Tony's ability to adapt and get the most out of a USAC midget or sprint car, an Indy car or a NASCAR stock car makes him the modern day version of A.J. Foyt and Mario Andretti. It doesn't matter what you call the car, or where it races, Tony Stewart can race it and race it to the front. He is also one of the very few drivers that has been able to transition his success as a driver into successful team and track ownership.

"As a proud Hoosier, Tony's triumphs at the Indianapolis Motor Speedway have been some of the track's most special moments. We look forward to celebrating Tony's driving career throughout 2016, cheering him on in person at the Brickyard 400, and continuing to watch his team compile many more achievements for years to come."

"I'm not surprised that Tony will retire from NASCAR Sprint Cup competition after the 2016 season because it is something he's talked about doing in our conversations over the last six or eight years. NASCAR Sprint Cup racing will miss him behind the wheel. I think he always viewed Cup racing as a job that helped him fulfill his passion for racing on dirt tracks, running world-famous Eldora Speedway or owning the All Star Circuit of Champions Sprint Car Series. I don't know anybody that loves racing more. He's a sure-fire, first ballot shoo-in for the NASCAR Hall of Fame."

“Tony Stewart has been a key member of our racing family for nearly 20 years. The majority of his race wins and championships—regardless of series—have been with our brands. Not only is he a championship-winning driver and team owner, he is an entrepreneur and gives back to numerous charities. Through his Tony Stewart Foundation, he pours his heart into causes that support children, animals and others in need of assistance. We value our long-standing partnership with Tony and look forward to joining his fans in celebrating his final season as a full-time driver in the NASCAR Sprint Cup Series.”

“As a promoter, fellow Hoosier, and race fan, I love and respect Tony Stewart.  He is an elite racer, a feisty, authentic, fun, independent person, and one of the most generous people I've ever known.  His NASCAR Sprint Cup Series Championship run in 2011, and the race at Homestead-Miami Speedway in particular, will forever be one of the most amazing individual drives I have ever seen and a memory I will keep forever.  Motorsports will not have one of its greatest drivers ever competing after 2016, but, thankfully, we will still have Tony - his huge personality and his genuine love of racing around.” – Roger Curtis, president, Michigan International Speedway

Clint Bowyer, future driver of No. 14

"Whether it’s racing him on Sunday or watching my dirt late model teams race at his famed Eldora Speedway, Tony and I share the same passion for racing. That makes this opportunity a perfect fit for me. I appreciate everything he’s done for me and the sport of auto racing. These are big shoes to fill, but boy am I ever looking forward to getting behind the wheel of a champion’s ride, and have Tony there with me along the way.”

Tony Stewart has been a game-changer for Stewart-Haas Racing and for motorsports. I always had an incredible amount of respect for what he could do with a racecar – any racecar, as he’s been successful in everything he’s ever driven. In getting to know Tony Stewart the businessman, I found a very smart person with excellent people skills. He’s extremely valuable to our race team and a strong voice in our sport. His passion for motorsports is unmatched, and I’m proud that his future outside of the No. 14 Chevrolet remains with Stewart-Haas Racing.”

"It’s hard for a driver to walk away when they’re not running well, so this decision probably was a real tough one for Stewart.  When you’re running well, you don’t want to step aside, but when you’re not running well, you want to keep going until the tide turns and you can go out on top a little more.  You keep thinking and hoping you can get that magic back.  Hopefully, Stewart will get the ship steered in the right direction, make good use off the off-season, come back in 2016, have a great year and feel really good about leaving the driver’s seat when he does.

"There is absolutely no question Stewart is one of the top-five stock-car racing drivers of all time and one of the most versatile NASCAR has ever seen.  He has won championships in the Cup Series, IndyCar Series, sprint cars and IROC.  That versatility sets him apart from most anyone who has ever graced the cockpit of a stock car.  Stewart is the epitome of a pure driver who only cares about racing.  He doesn’t do it for the fame or the money but rather for the thrill and love of the competition.

“In addition, he is a great businessman who had the foresight and savvy to team up with Gene Haas, going on to win a championship both as a driver/owner and then as an owner with Kevin Harvick.  Stewart turned that team into a powerhouse when he arrived because he understood what it takes to be successful not only as a driver but as an owner.  He did the same thing in sprint cars previously, and also has done an incredible job as owner of Eldora Speedway, one of the most iconic dirt tracks in the United States. Stewart has expertly done many of the extracurricular things I dreamed of doing. I wish I could have been a successful driver/owner like he has been.  He was able to balance life and business inside and outside the car, and that is very rare in this sport.”