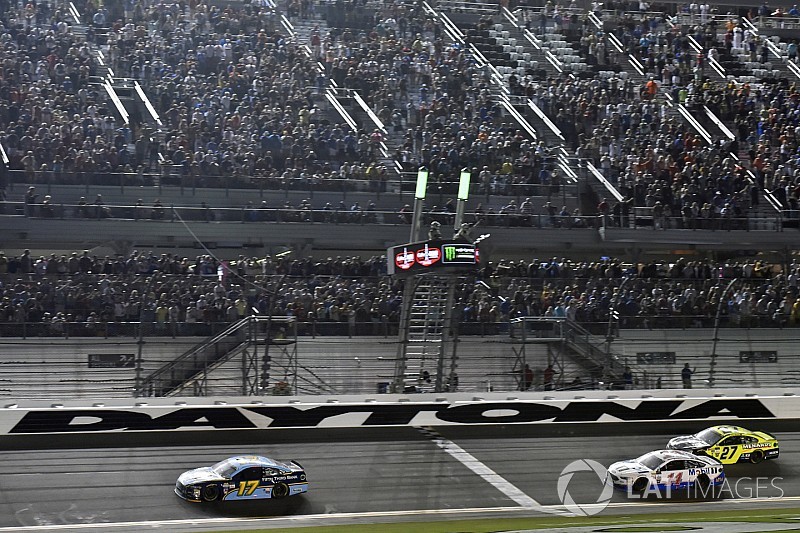 For the second time in as many races, Clint Bowyer came up short.

“This bridesmaid deal sucks,” Bowyer said. “I want to win. We’re in this business to win. That’s what Tony (Stewart) and Gene (Haas) pay me to do. I’m proud of everyone on the Mobil 1 Ford team.”

Clearly, Bowyer has the equipment and team to accomplish the task. His SHR teammates Kurt Busch and Harvick have already won this season. Although Harvick has led 545 laps and is currently fourth in the Monster Energy Cup Series standings, Boywer is currently 10th. He added four circuits to his 17-laps led tally on Saturday night.

Still, in his first season with SHR — and the company’s first season since moving to Ford Performance — Bowyer has not lacked for horsepower to run up front. But with six Chevys and a Toyota behind him, he lacked the necessary support needed to win.

“With every caution you'd look over and there would be a few of your partners over there in the pile, and you're like, ‘Uh‑oh,’ and then the next caution there would be a few more Fords over there, and then the next thing you know it's kind of me and Ricky there at the end,” Boywer said. “Let me just say this: Those Roush Yates engines are phenomenal. Doug (Yates, chief engine builder) does such a great job, puts a lot of emphasis on this plate stuff, takes a lot of pride in it, and he should. Those things run amazing. They take a beating out there.

“At the end of that thing, I was overheating, blowing water, doing all the things that you know are going to happen when we get like that. I mean, I was pushing him all the way down the back straightaway all the way through 3 and 4.

“It was just kind of one of those deals. We were up against the wall, and I was shoving, and the water temperature was pegged and blowing water. Those things are phenomenal. It's amazing any of these engines make it through this stuff. I'm just blown away if you really think about it and look at the mechanics of what those on in them things each and every week, you're looking back at last week, all the rpms and everything that turns, I'm just proud to have that Roush Yates power under our hood.”

Bowyer qualified 11th and finished fourth in the first stage. He was running seventh

prior to the 10-car wreck on lap 72 — with eight laps remaining in the stage but fell out of contention on the restart. Unlike his fellow SHR teammates — each who sustained damaged throughout the course of the 163-lap race — Bowyer avoided the melees throughout the evening.

He restarted 10th for the final stage and moved to the lead on Lap 106 before the race went under caution for the ninth of 14 yellow flags. Stenhouse passed Bowyer four laps later and remained in the top five before pitting during the 10th caution on Lap 118.

Bowyer worked his way back to the front and stuck with Stenhouse to earn his third second-place finish in 2017 and move into the top 10 in the standings. Certainly, the solid runs of late can serve as a catalyst come the playoffs.

“Well, it's definitely a momentum thing,” Bowyer said. “Look at the last two weeks, we've been second, runner up. Second sucks, but it's better than third. You know? We finished second two weeks in a row, so that's a huge confidence booster for our team, but nonetheless, the pressure cooker is turning up.

“You're sitting there looking up there that green‑white‑checker coming to the green there, and you're thinking, oh, no, somehow, some way, I've got to get up there and keep one of those guys that are going to be first time winners out of this thing. That's real, it's alive, and it's something you're going to have to pay attention to. You hope you keep riding this wave and turn one of those seconds into a win.”

RCR and its affiliates fill the top ten at Daytona