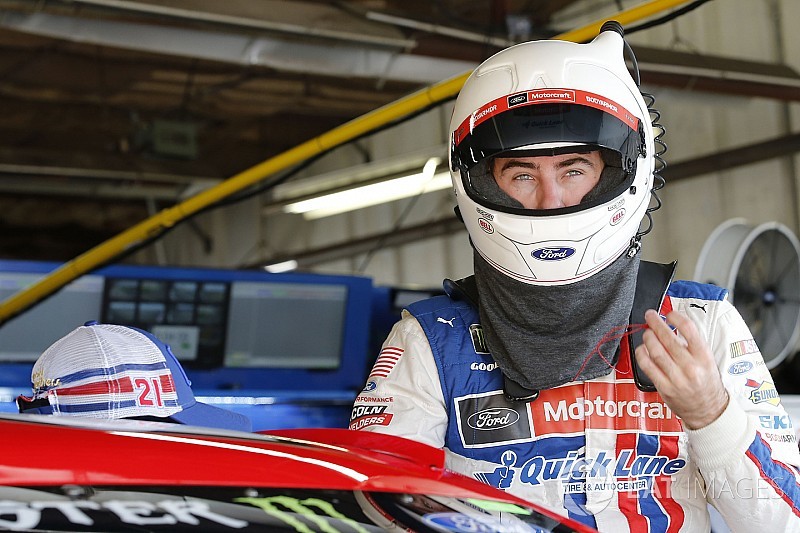 Ryan Blaney was fastest in Happy Hour at Bristol Motor Speedway with a lap of 128.544mph.

The driver of the No. 21 Wood Brothers Ford shot to the top of the speed chart in the closing minutes of final practice after completing 46 laps.

Blaney jumped to the top of the speed chart in the opening minutes of second practice with a lap of 125.782mph. Kyle Busch bumped Blaney three minutes in with a lap of 126.104mph on his 10th laps. Kenseth ran third followed by Harvick, Stenhouse, Hamlin, Larson, Newman and Bayne.

Kenseth moved up to the top spot 10 laps in despite being uncomfortable with the surface.

“I almost crashed right there,” Kenseth said after the first three laps. “I don’t know if it’s my car or the track.”

Timmy Hill lost control of his car coming out of Turn 4 and slid sideway down the front stretch — just before NASCAR called a caution for rain. Kenseth remained atop the leader board followed by Kyle Busch, Blaney, Harvick Stenhouse, Hamlin, Larson, Keselowski, Suarez and Newman rounded out the top 10.

Reports of mist on the track came with 40 minutes to go. Austin Dillon entered the fifth-fastest speed — 125.963mph. His Richard Childress Racing teammate Ryan Newman (126.378mph) was fourth on his flyer run. McMurray moved to second (127.963mph) followed by Larson (127.182mph). Bowyer and Truex rounded out the top five with 35 minutes to go.

After a brief weather delay, practice resumed with Larson still on top of the speed chart. In the final 10 minutes, Blaney bounced up to second — then posted the fastest lap on his final run.

Chris Buescher to continue with JTG/Daugherty Racing in 2018