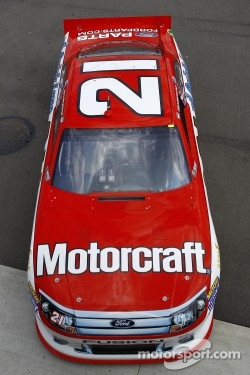 All across the Sprint Cup garage, people are looking at this weekend’s Geico 400 at Chicagoland Speedway in much the same way they approach the Daytona 500.

The 400 is much like the start of a new season, as it’s the first of 10 races that make up the Chase for the Sprint Cup.

For Trevor Bayne and the crew of the No. 21 Motorcraft/Quick Lane Ford Fusion, any comparison to the Daytona 500 evokes pleasant memories, as it was in that race back in February that the famed Wood Brothers team opened their 61st NASCAR season by scoring their fifth Daytona 500 triumph.

Now it’s on to Chicagoland and the start of the 2011 post-season.

Bayne and the Woods aren’t running the full Cup schedule and therefore aren’t in contention for the title, but they will get to share the electricity of the moment.

“It is exciting to be in the first race of the Chase,” team co-owner Eddie Wood said. “We’re proud that two of our Ford teammates, Carl Edwards and Matt Kenseth over at Roush-Fenway Racing, are in the Chase.”

But that doesn’t mean that Wood and his team plan to be bystanders for the final 10 races.

“From our standpoint, we’re not worried about the points,” he said. “We’re going to race as hard as we can.”

Wood said Bayne and his Donnie Wingo-led crew will be respectful of the 12 Chase drivers and race them as cleanly as possible.

“Still, at the end of the day it’s every driver for himself,” he said.

Wingo said he’s glad to be headed back to one of the high-banked, intermediate oval tracks where the Ford Fusions have run so well this season. And although his rookie driver has never run a Cup car at Chicagoland, he has run well there in the Nationwide Series. In three career starts, Bayne has two top-10 starts and a third-place finish back in June.

“It’s a place where all the Fords run well, and the laps that Trevor has run there in the Nationwide Series should help out,” Wingo said.

The Ford Fusion that Wingo has prepared for this weekend’s race is the same one the team ran at Las Vegas and at the first Michigan race, and he’s planning to set it up for running multiple grooves.

“The track at Chicago has weathered some, so the top side should be good,” he said. “We’ll set up to run the top or the bottom.” Wingo also said that even though 12 of the team’s competitors will be racing for a championship, he’s not going to let that adversely affect his team’s chances.

“You don’t want to do anything that would affect the Chase, but you still have to run your own race and race people the same way they’ve been racing you all year,” he said, adding that if he gets a chance to use pit strategy to gain track position near the end of the race, he’ll do it. “When it comes down to the end, you have to do whatever you need to do to be at the front.”