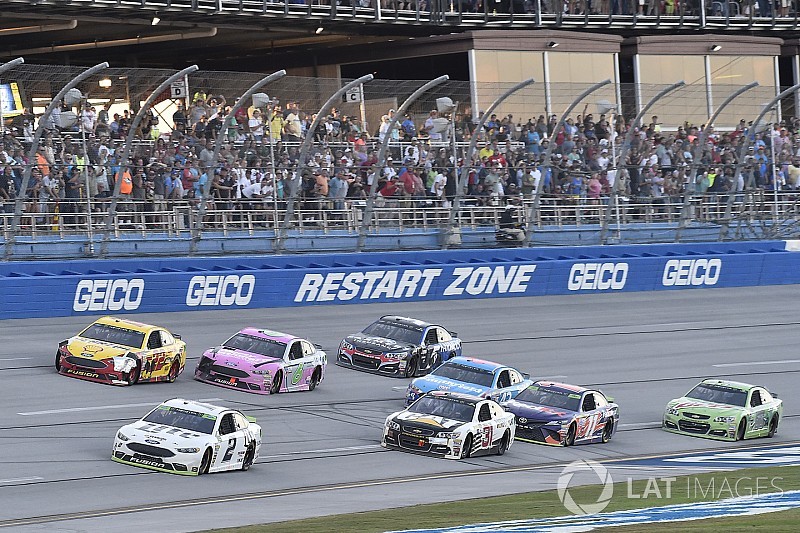 Ryan Newman managed to avoid all the accidents in Sunday’s Monster Energy NASCAR Cup Series race at Talladega and his reward was the opportunity for a victory.

Unfortunately for Newman, that didn’t pan out.

Newman found himself lined up second behind race leader Brad Keselowski on a restart with three of 188 laps remaining in Sunday’s Alabama 500.

With two to go, Newman moved into the lead with some help from Denny Hamlin only to see Keseleowski’s Team Penske teammate, Joey Logano, help push Keselowski back to the lead on the final lap and on to the win.

Newman, who was eliminated from the NASCAR playoffs two weeks ago, ended up as runner-up, his second-best finish of the 2017 season.

“We held them off longer than I expected. I couldn’t tell how much nose damage I had and I hadn’t led all day, so I didn’t know what to expect,” Newman said after the race. “I saw (Keselowski) in the mirror backing up and then he lost his draft and then he backed up again and he caught (Logano). That was all it took for him to get a good run.

Newman was among a select group of three drivers – Keselowski and Hamlin were the others – who managed not to get caught up in any of the race’s 11 cautions.

Newman’s runner-up finish was his seventh top-five finish of the season – his highest total since 2011 when he was with Stewart-Haas Racing.

The Richard Childress Racing driver has struggled since the playoffs began, having finished no better than 13th in its first four races. He wrecked out early in last weekend’s race at Charlotte Motor Speedway.

“I wish we could have pulled it off. It’s one of those deals where you stay out front and the caution comes out after you take the white, you look like a hero, but you start backing up to the guys behind you, and next thing you know you've got passed and then the caution comes out, so I kept my foot in it and did what I thought was right,” he said.

“I basically got double‑teamed and (Keselowski) and (Logano) got a good run past me. Hamlin did a great job of getting me going at the start there; kind of reminded me of the old tandem days of drafting.

“But just not the end result that we wanted but a good performance, and we needed that after my screw‑up last weekend.”

Was Talladega the one that got away for Denny Hamlin?