Aric Almirola on strong start: "We're going to be in contention" 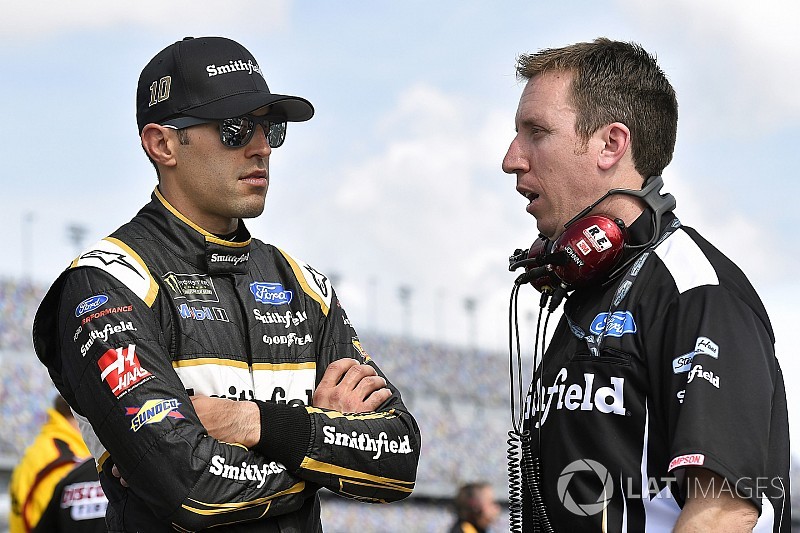 It hasn’t taken long for Aric Almirola to prove his worth to Stewart-Haas Racing and the organization is already reaping the benefits.

Almirola rebounded from a disappointing starting position to rally for a 10th-place finish in Sunday’s Pennzoil 400 at Las Vegas Motor Speedway – his first top-10 of the 2018 season.

He is also 12th in the Monster Energy NASCAR Cup Series standings heading into next weekend’s race at Phoenix. In three races, Almirola has already matched the total of top-10 finishes from the No. 10 car at SHR in all of last season.

Almirola took over the No. 10 at SHR this season after Danica Patrick left the organization.

“I’m just really proud of everybody. If we continue to run like this, we’re going to be in contention to win some races later on,” Almirola said after the race in which his teammate Kevin Harvick dominated to his second win of the season.

“We’re building some really fast race cars and we just need to continue to build a notebook between me and (crew chief) Johnny (Klausmeier) and continue to figure out what we need in our race cars.

“We just want to keep building the momentum and run solid and put ourselves in position to go make the playoffs.”

SHR co-owner Tony Stewart was among the first to meet Almirola outside his car on pit road after the race.

“I’m real impressed. This is what I knew he could do all along. We just had to get him in here and give him a shot to see what he could really do,” he said.

“Aric had to race a lot of fast cars and race them hard all day compared to Kevin, who had the flexibility a lot of the day to race in clear air. Aric never got in clean air. I think they’re doing an awesome job and showing what this team has always been capable of.”

Almirola’s rebound in the race stood out even more considering the dominance of Harvick, who left only nine cars on the lead lap at the end of the race and won by nearly three seconds.

“We had to battle back from a lot this weekend. We started in a hole. Our car was not very good on Friday or Saturday morning,” Almirola said. “The guys made a lot of changes for final practice and we finally hit on something that felt good for me.”

Last week, Harvick mentioned on his weekly show on SiriusXM NASCAR Radio that the improved performance from the No. 10 car his year has been boost for the organization.

Asked Sunday after the race if Almirola validated his point, Harvick said, “When you look at the impact of having a fourth team that is as competitive, there is really no value you can put on that because that car has been irrelevant really since I’ve been here from a performance standpoint.

“To have Aric coming over with something to prove obviously and go out and do that – they had a long weekend, had to struggle with a lot things. To have a good finish says a lot about the relationship they are going to build amongst each other as far as driver-crew chief and team.

“That’s what we need from a Stewart-Haas Racing standpoint – to have that fourth team be competitive and running up front.”

Truex admits Harvick in “his own zip code again”