"The three weeks in particular, the therapist has said we really turned a corner" - Tony Stewart.

LAS VEGAS -- Tony Stewart got great news from his physical therapist on Wednesday and a big surprise a day later at Wynn Las Vegas, when he received the prestigious NASCAR/NMPA Myers Brothers Award for outstanding contributions to motorsports.

Stewart broke his right leg Aug. 5 in a sprint car accident in Iowa. As he strode to the stage to receive the headline award at the Myers Brothers Awards Luncheon, Stewart walked with a slight limp, but without the cane he had used a two weeks ago during Ford Championship Weekend at Homestead-Miami Speedway.

"I'm really confident about Daytona now," Stewart told reporters after the luncheon. "The three weeks in particular, the therapist has said we really turned a corner. That was good when we had that conversation after therapy (Wednesday). He's really happy, and he's the one I've got to judge it off of. 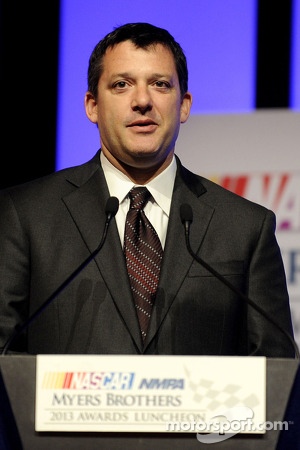 Especially the last couple of weeks, I feel like I've got my energy back. My appetite's back, so that's normally a good sign that you're getting back to normal."

The three-time NASCAR Sprint Cup Series champion doesn't plan drive a race car until Speedweeks open at Daytona International Speedway in mid-February. Mark Martin will handle testing duties for the No. 14 Stewart-Haas Racing Chevrolet until then.

"I thought I was just getting a free dinner here and a trip to bring Borland out here to get his award," Stewart said. "But what an honor. I'm very glad I came out now, for sure."

Stewart says he has lost 16 pounds since his accident.

As feisty as ever, Stewart ended his award acceptance with a promise directed at NASCAR Sprint Cup champion Jimmie Johnson and his team.

"It was hard sitting on the sidelines watching," said Stewart, who missed the final 15 races of the season. "But it gave me a different perspective that I haven't seen in years, of what we all do each weekend. It was a lot of fun to sit there on the side and watch you guys do what we do.

"But take this as your warning. I gave you (15) weeks off without me. I'll be ready for Daytona, and I'll be back to getting your (butts) again soon."

Johnson had his own share of acclaim, winning the Duralast Brakes Brake in the Race Award, the Sunoco Diamond Performance Award and his sixth Goodyear Gold Car, the coveted trophy from the NASCAR Sprint Cup Series' exclusive tire maker.

Dale Earnhardt Jr. won the NASCAR NMPA Most Popular Driver Award for the 11th straight time, having been chosen by votes cast by race fans from February to mid-November.

"It's been a great honor to accept (the award) over these last few years," Earnhardt said. "It humbles me deeply to know that you have so many race fans in your corner each race weekend. There are of motivating factors in life that drive our race team to be the best we can be, but none impact us more than the support of our race fans that they've shown over the years."

Earnhardt's No. 88 pit crew earned the Mechanix Wear Most Valuable Pit Crew Award, thanks to a season average of 12.4 seconds per pit stop -- despite using three different rear tire changers because of injuries.

Series runner-up Matt Kenseth was a multiple winner, claiming the 3M Lap Leader Award, the Freescale Wide Open Award (for highest percentage of time in the throttle) and the Mobil 1 Driver of the Year Award.

Ricky Stenhouse Jr. was recognized as the Sunoco Rookie of the Year in the NASCAR Sprint Cup Series, beating out girlfriend Danica Patrick.

"Battles are tough, especially when you're going against your girlfriend," Stenhouse quipped. "We've had a few run-ins, which resulted in one really quiet ride home. I learned real quick that, if there's a question it could be my fault, it's better to just go ahead and apologize and get it over with."

The three auto makers involved in NASCAR Sprint Cup racing shared the prestigious Buddy Shuman Award for their collaborative work with NASCAR and with each other on the development of the new Gen-6 race car.

The Coca-Cola Company won the 2013 NASCAR Marketing Achievement Award for its innovative and highly successful promotional efforts throughout the season.

Under new NASCAR Hall of Fame criteria, some active drivers are now eligible