With Montoya's departure from EGR, two names are already rumored for the 2014 vacant seat.

BROOKLYN, Mich.-- By the time Juan Pablo Montoya got the official word that he was out of Earnhardt Ganassi Racing’s No. 42 Chevrolet at the end of the 2013 season, it was almost an anticlimax.

For months, Montoya had known the parting was coming, and he had already begun to explore other options.

"I think I knew from quite a while ago, to be honest with you," Montoya told reporters Friday at Michigan International Speedway during a question-and-answer session behind the No. 42 transporter. "They (EGR) had an option earlier in the year and they didn’t take it, so I kind of knew it was going to be something different next year, and that’s it.

"They confirmed it this week, and that was it." 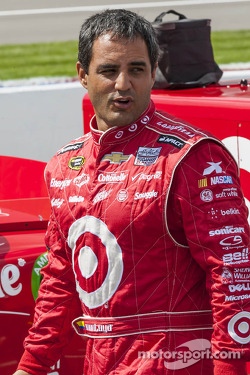 As to what the future holds, Montoya has only one requirement.

What kind of winning car remains to be seen. The 2000 Indianapolis 500 champion, Montoya also has seven Formula One victories on his resume. A return to open-wheel racing isn’t out of the question.

"I have talked to a lot of people--put it that way," Montoya said. "I don’t want to be specific about anybody. I know some people are interested, and I just want to make sure whatever I do, as I told you, (that) I have an opportunity to win races.

"I grew up winning, and I’ve won at everything. I won some races here, but I miss dominating."

During his media availability, however, Montoya did provide a couple of revealing clues. The first involved loyalty to a particular manufacturer.

The second was an indication that seven full seasons in NASCAR racing--with just two road-course wins to show for his efforts--may be enough.

"My heart always has been in open wheel. I had a lot of fun in NASCAR--and, you know, we will see." 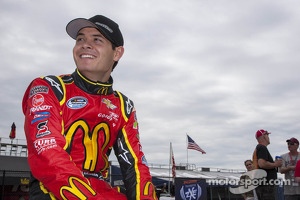 Montoya’s impending departure from Earnhardt Ganassi Racing leaves a desirable open seat for 2014. As the silly-season dominoes start to fall, the question becomes: Who will fill it?

It’s no secret that owner Chip Ganassi has 21-year-old prodigy Kyle Larson signed to an eight-year contract. Whether Larson is ready to make the leap to full-time Cup racing after one season in the Nationwide Series is an open question.

It’s also no secret that Kurt Busch had discussions with EGR long before the announcement of Montoya’s departure. To Busch, the 2004 Cup champion, the landscape hasn’t changed appreciably since the parting between Ganassi and Montoya became official.

"It hasn’t changed anything," Busch said Friday at Michigan. I’m good friends with Felix Sabates, and I know Chip real well, the whole gang--(team manager) Max Jones, (EGR president) Jake Lauletta--and they came up with that decision, not based off any of the talks I’ve had with them, but it is a potential opportunity. That’s for sure."

Busch also is talking to his current team, Furniture Row Racing, about a possible extension, but his primary focus is on qualifying for the Chase for the Sprint Cup. With four races left before the Chase field is set at Richmond, Busch is 11th in the Cup standings, two points behind Martin Truex Jr. in 10th. 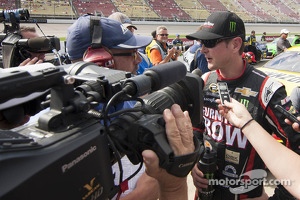 "The focus is making the Chase, and we have four weeks to go," said Busch, who threw the first pitch at a Colorado Rockies game earlier this week. "We’re in a great position. It’s been neat to feel the energy of the team. We spent a week in Colorado meeting with Denver media, and they’ve adopted us as a fifth sports entity for that town. It’s really neat. They talk Broncos, they talk Rockies, and now they’re talking us.

"So it’s cool to have talks with Furniture Row about what we can do in 2014 and beyond. The Ganassi thing came up, and other phone calls have happened. Nothing’s been changed. We’re just really focused on the Chase and what we can do in the next four weeks together."