The world’s leading synthetic motor oil brand will continue as a primary co-sponsor of Tony Stewart and the No. 14 Chevrolet SS.

CHARLOTTE, N.C. – ExxonMobil has strengthened its ongoing commitment to NASCAR by renewing its multi-year sponsorship with three-time NASCAR Sprint Cup Series champion Tony Stewart and Stewart-Haas Racing. Mobil 1 will adorn the hood of Stewart’s No. 14 Chevrolet for 11 races in 2014, while taking a high-profile associate role in the remaining races. 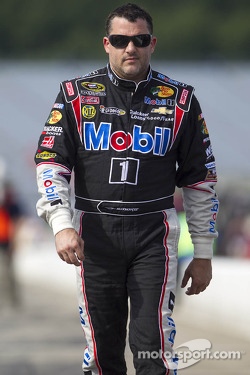 “Tony and Stewart-Haas Racing have done an incredible job highlighting the value of Mobil 1 technology, so it was an easy decision to renew our sponsorship with one of NASCAR’s top drivers and teams,” said Artis Brown, global motorsports manager, Mobil 1. “The entire ExxonMobil team is looking forward to Mobil 1 technology helping Stewart-Haas Racing remain a championship-caliber team in the NASCAR Sprint Cup Series.”

Although Stewart saw his 2013 season cut short due to a leg injury, he has been one of the most successful Sprint Cup drivers since joining NASCAR’s elite series in 1999. In 2011, Stewart’s debut season for Mobil 1 Racing, he won an amazing five of the 10 Chase for the NASCAR Sprint Cup races, including the finale at Miami-Homestead Speedway, where he clinched his third Sprint Cup title.

In the 2012 season, Stewart earned three wins and 12 top-five finishes while making the Chase for the NASCAR Sprint Cup for the eighth time since the Chase’s inception in 2004. In total, Stewart has earned nine Sprint Cup victories and 43 top-ten finishes with Mobil 1 lubricant technology in the No. 14 car.

“We’re very pleased to extend our multi-year technology partnership with Mobil 1,” said Tony Stewart, co-owner of Stewart-Haas Racing with Haas Automation founder Gene Haas. “During the past few years, Stewart-Haas Racing has seen real progress from our collaboration with Mobil 1. We’ve had an improvement in fuel mileage, engine efficiency and reliability, and we’re confident that Mobil 1 will help us contend for another NASCAR Sprint Cup Series championship.”

Additional details of the Mobil 1 and Stewart-Haas Racing deal:

- Mobil 1 will serve as the co-primary sponsor of the No. 14 Chevrolet SS with Bass Pro Shops.
- Mobil 1 will also be an associate sponsor of Kurt Busch’s No. 41 Haas Automation Chevrolet and Kevin Harvick’s No. 4 Budweiser/Jimmy John’s Chevrolet. - ExxonMobil will provide Mobil 1 lubricant technology and engineering support to Stewart-Haas Racing, including the No. 10 GoDaddy Chevrolet.

Mobil 1 has been the Official Motor Oil of NASCAR since 2003 and is used by more than 50 percent of the teams in NASCAR’s top-three series.

Jimmie Johnson celebrates 6th title with eye on a 7th