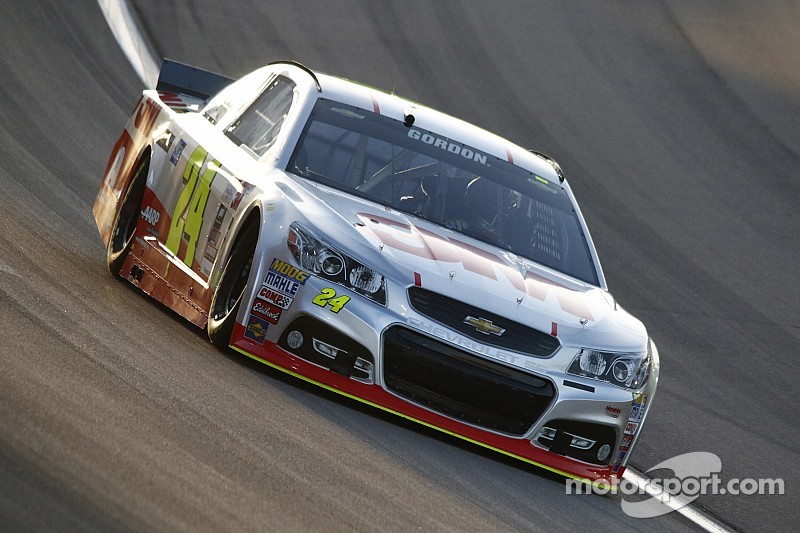 Gordon makes his final tour around the speedways that are home to the NASCAR Sprint Cup Series.

Las Vegas, Nev.—Don’t underestimate the importance of career milestones for Jeff Gordon, as the driver of the No. 24 Hendrick Motorsports Chevrolet makes his final tour around the speedways that are home to the NASCAR Sprint Cup Series.

Gordon crossed off an item from his checklist on Friday afternoon when he won the pole for Sunday’s Kobalt 400 at Las Vegas Motor Speedway. Vegas was one of three tracks where Gordon had never before qualified on the pole.

Now only Kansas and Kentucky remain...

Unfortunately, Gordon won’t start from the front row on Sunday, thanks to a late accident in Saturday’s final practice that will force him to start from the rear of the field in a backup car.

Gordon, however, still gets credit for the pole and he can take solace in the knowledge that the first- and second-place finishers in last week’s Atlanta race came from the back of the field.

As Gordon acknowledged on Friday, the biggest career objective he can attain—other than winning a fifth championship—is taking a checkered at Kentucky Speedway, the only remaining active Sprint Cup track where he hasn’t won a race.

Gordon’s last shot will come July 11, when the NASCAR Sprint Cup Series visits the 1.5-mile track in the Bluegrass State for the fifth time. More immediately, a Sunday victory at Las Vegas, where Gordon’s lone win came in his last championship season (2001), would be enormously satisfying.

“One of my big goals this year is to win at Kentucky because I want to check off every track on the circuit and, to me, that win (at Las Vegas) in ’01 was a big checkmark, because I know how difficult it is to win here,” Gordon said.

“Obviously it’s difficult; I haven’t done it since 2001. So, it’s a tough place and I’m very proud to have that win.”

A shoo-in first-ballot Hall of Famer as soon as he’s eligible, Gordon is locked into third all-time in both career wins (92) and poles (78). Realistically, he won’t catch David Pearson, who is second in both categories with 105 victories and 113 poles.

But fans at New Hampshire Motor Speedway can look forward to another milestone later this year.

Assuming Gordon doesn’t miss any races between now and then, he will break Ricky Rudd’s record for consecutive starts (788) in the New Hampshire Chase race in September. The four-time champion hasn’t missed a race since his debut in the Cup series in November 1992.

The odds of Gordon winning at Las Vegas got considerably longer in the last minute of final Sprint Cup practice on Saturday. Danica Patrick spun in front of Gordon, who sustained damaged to the right front of the 24 Chevy, necessitating the move to the backup car.