The Daytona 500 once again produced an improbable first-time winner in the NASCAR Cup Series.

Michael McDowell emerged from a fiery crash among the leaders on the last lap as the leader when NASCAR placed the race under caution, securing his first career victory in NASCAR’s premier series.

Joey Logano led the way entering the final lap and by the exit to Turn 2, his teammate Brad Keselowski had moved in behind him.

Entering Turn 3, McDowell shoved Keselowski into the back of Logano hard, which triggered a wreck that collected Logano, Kyle Busch, Austin Cindric and Bubba Wallace with car parts and fire erupting all over the track. 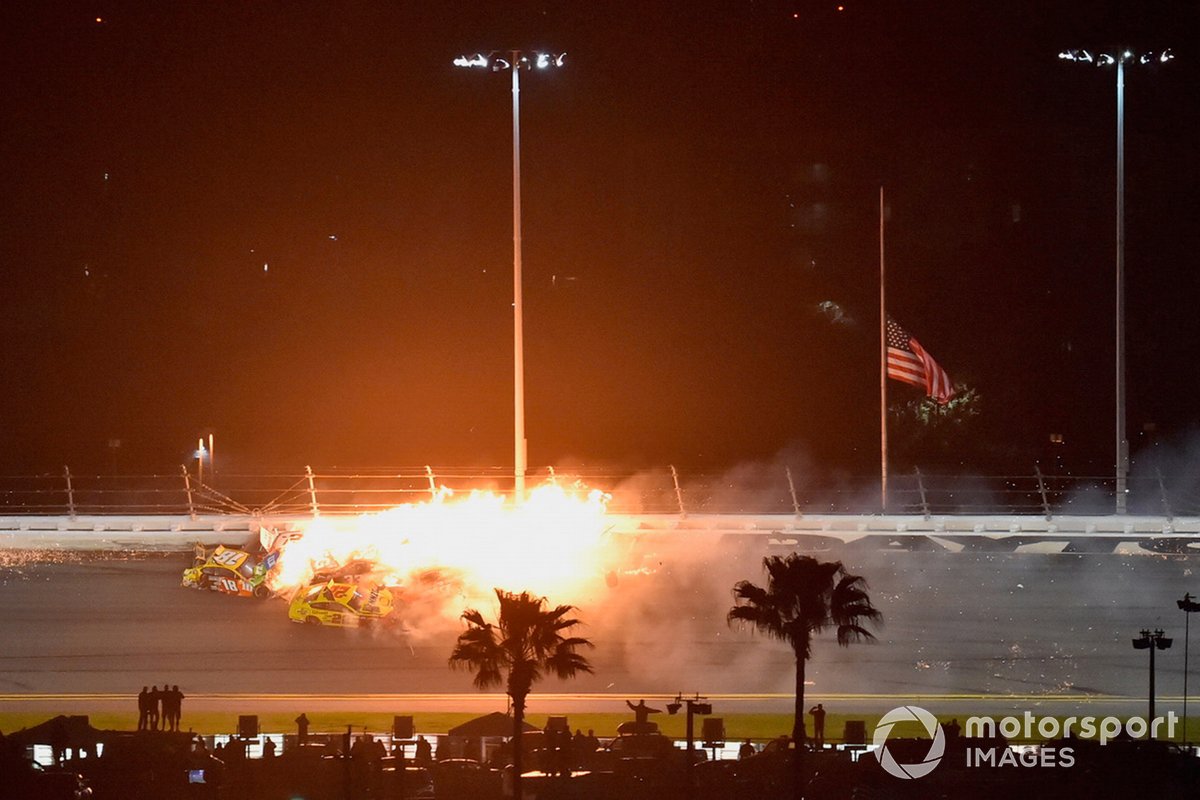 “I just can’t believe it. I’ve just got to thank God," a stunned McDowell said standing on the frontstretch by his car. "So many years just grinding it out and hoping for an opportunity like this. I’m so thankful. Such a great way to get a first victory -- a Daytona 500. Are you kidding me?

"I just want to say hi to my wife back home. Happy Valentine’s Day. I know it’s been a tough week. My kids, I love you guys. I wish they could be here with me to celebrate. Maybe NASCAR will send a plane to bring them down here, but we’re the Daytona 500 champions.  We had our Ford partners at the end and they all crashed, but luckily I was able to make it through.

Asked to describe the final lap, McDowell said: "My plan was to stick to (Keselowski). I knew he would go for a race-winning move and my plan was to let him make that move and then coming off of (Turn) 4 try to get to his outside or inside. I knew I didn’t want to make my move too early, so I was committed to (Keselowski's) bumper and when he made the move, the hole opened up.

It took several minutes, but NASCAR’s review of scoring showed McDowell’s No. 34 Ford was clearly ahead of Chase Elliott when the caution was displayed and he was declared the winner.

All of the drivers involved in the incident were able to exit their cars under the own power and were taken to the infield care center.

Following the break between Stages 2 and 3, all the lead-lap cars elected to pit with Dillon the first off pit road.

Kurt Busch and Larson both had to restart from the rear of the field, Busch for too many crew members over the wall and Larson for a safety violation.

When the race went green on Lap 137, Dillon led the way followed by Hamlin, McDowell, Harvick and Wallace.

Hamlin quickly powered back to the lead on the restart as Harvick moved into second.

With 60 laps left in the race, Hamlin led a single-file line followed by Harvick, Logano, Kyle Busch and Cindric.

The Ford cars made their final green-flag pit stop on Lap 171, coming down as a group. The Chevrolets followed on Lap 172.

With 28 laps remaining, the four Toyotas on the lead-lap hit pit road together for their final stop.

Once the cycle of stops was completed, Logano took over the lead on Lap 176.

Wallace reported a vibration in his No. 23 Toyota with 24 laps remaining and was forced to pit under green with 22 to go.

With 10 laps left, Logano continued to lead the way with Harvick close behind in second. Keselowski ran third, McDowell fourth and Dillon fifth. Hamlin was trapped back in ninth.

Hamlin survived a three-way battle with Wallace and then Harvick to complete a sweep of the first two stages.

Wallace ended up third, Elliott fourth and Dillon rounded out the top-five.

Following the break between Stages 1 and 2, all the lead-lap car elected to pit with Hamlin the first off pit road.

On the restart on Lap 72, Hamlin was followed by Christopher Bell, Dillon, Cindric and Larson.

With a big shove from Logano, Cindric powered into the lead after the restart.

On Lap 74, Hamlin with Bell behind him was able to reclaim the lead. With help from Kyle Busch, Bell took over the lead on Lap 75.

With 50 laps remaining in the second stage, Bell continued to lead followed by Kyle Busch, Hamlin, Dillon and Cindric.

At the halfway mark of the 200-lap race, Bell remained out front with Kyle Busch second and Hamlin third and teams began formulating their strategy to make a green-flag pit stop to take on fuel to make it to the finish of Stage 2.

Harvick, Logano, Chase Briscoe and Cindric were among the first group to begin green flag stops on Lap 104. Toyotas pit on Lap 107, turning the lead over to Dillon.

Most of the Chevrolets pit on Lap 109 and when the cycle of stops was completed, Larson led the way on Lap 111.

On Lap 112, Bell got loose exiting Turn 2 and made contact with Stenhouse. Larson Jamie McMurray were also collected some damage in the incident.

During the caution, several drivers elected to pit and Kaz Grala came down pit road with fire erupting out of his right-rear tire well. The damage was severe which brought an end to his race.

Hamlin remained on the track and continued to lead when the race returned to green on Lap 118.

Harvick quickly powered into the lead on the restart.

With a shove from Wallace, Hamlin reclaimed the lead on Lap 120.

Hamlin held off a spirited challenge from Preece to take the Stage 1 win, the first stage victory of the 2021 season.

Dillon was third, Larson fourth and Cindric rounded out the top-five.

Alex Bowman started on the pole, but Harvick grabbed the lead on Lap 2 thanks to a push from Aric Almirola.

On Lap 3, Derrike Cope hit the wall exiting Turn 4 after contact with Wallace to bring out the first caution. Several cars hit pit road to top off with fuel but Bowman remained on the track and in the lead.

The race returned to green on Lap 8.

Entering Turn 3 on Lap 14, Kyle Busch got into the back of Bell, who then hit the rear of Almirola, which turned him up the track and triggered a massive pile-up involving several of the top contenders.

“We had raced up there into the top-10 and I think we were just outside of it when the big wreck started,” Jones said. “Bummed, but there are 35 more races left this season to go back out and make up for it.

“We’ll work hard to try and make these points up here as we go and move onto the Daytona Road Course next week.”

Before most of the cars could pull away from the wreck a lightning strike in the area forced a red flag and minimum 30-minute hold. Heavy rain then covered the Daytona Beach area.

After a more than 5-hour, 40-minute rain delay, the race returned to caution at 9:08 p.m. Teams involved in the wreck immediately went to work making repairs.

Several drivers made pit stops under the caution with Bell the first off pit road. That put Elliott in the lead followed by Austin Dillon, Larson, Preece and Ricky Stenhouse Jr. when the race finally returned to green on Lap 30.

Dillon moved out front on Lap 31 and Hamlin powered to the lead on Lap 33.

On Lap 38, Quin Houff and Briscoe collided in Turn 1 to bring out another caution. Houff appeared to run over debris dropped on the track by the damaged car of Byron.

The race returned to green on Lap 44 with Hamlin still in command.

With 15 laps to go in the first stage, Hamlin remained out front followed by Kyle Busch, Preece and Cindric.

Ten cars had to drop to the rear at the start of the race – Keselowski, Briscoe, Kaz Grala, Byron, Anthony Alfredo, Cole Custer and Chastain for backup cars; Jones for an engine change; Truex for an oil cooler change; and Wallace after his car failed pre-race inspection twice.

Michael Jordan says Bubba Wallace has "the talent to win"

Michael McDowell: "There's still a lot to come this year"