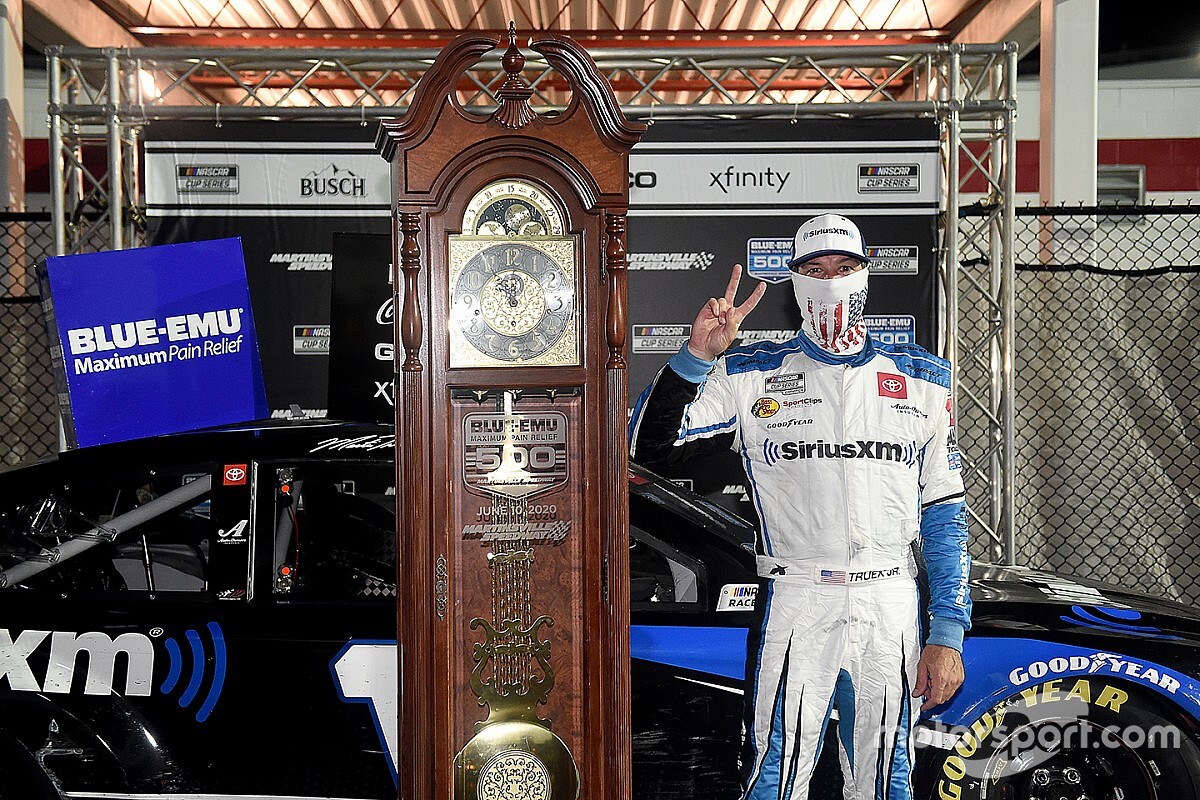 The win is Truex’s first of the 2020 season, second consecutive at Martinsville and 27th of his career.

With 50 of 500 laps remaining, Truex had built a 3-second lead and once Ryan Blaney moved into the runner-up position trying to challenge for the lead, Truex only expanded his lead.

"We've been working a long time on trying to figure this place out and chipped away at it. The last couple years we've been really strong," Truex said. "2018 was a heartbreaker with the end of the race there. Last year to get the win, and now this year.

"Hats off to the guys. We started the first run and pushed the right-front tire off and we were terrible. Really good adjustments from the guys. Just want to thank everyone who makes this possible. Congrats to James (Small, crew chief) on his first win. It's a big day for us.

"I want to say hi to all the fans at home - we miss you. This just doesn't feel right but exciting to win for sure."

The rest of the top-10 finishers: Alex Bowman, Matt DiBenedetto, William Byron, Kurt Busch and Jimmie Johnson, who earlier in the night picked up his first stage victory of the year.

Following the break between Stages 2 and 3, all the lead-lap cars elected to pit with Johnson the first off pit road. On the restart on Lap 272, Johnson was followed by Blaney, Logano, Bowman and Kevin Harvick.

Byron was penalized for an uncontrolled tire during his stop and had to restart from the rear of the field.

Blaney went to the outside of Johnson and took the lead on Lap 273.

Logano worked his way back to the front on Lap 285 as Blaney dropped to second and Harvick moved up to third.

On Lap 312, Blaney got back around Logano to reclaim the lead.

David Starr spun off Turn 2 on Lap 325 to bring out a caution. All the lead-lap cars elected to pit with Logano the first off pit road.

On the restart on Lap 333, he was followed by Keselowski and Johnson.

With 145 laps to go in the race, Logano remained in the tight battle with Keselowski and Elliott to hang on to the lead.

Keselowski got around Logano on Lap 365 to take the lead as Truex moved up to the second position and Logano dropped to third.

Truex got around Keselowski off Turn 4 on Lap 370 to move out front.

On Lap 400, Quin Houff spun and hit the Turn 2 wall to bring out a caution. All the lead-lap cars elected to pit with Truex the first off pit road.

During the caution, Austin Dillon was helped out of the car and was treated by medical personnel. Early in the race, he broke a crush panel on his No. 3 Chevrolet and experienced extreme heat and likely fumes inside the car.

On the restart on Lap 403, Truex was followed by Keselowski, Logano and Elliott.

With 75 laps remaining, Truex maintained a small lead over Logano with Elliott 1.6 seconds behind the leader.

After 450 laps, Truex had built a nearly 3-second lead over Keselowski with Blaney having worked his way back up to third.

Blaney got around Keselowski and moved into the runner-up position with 45 laps to go and with about a 3-second deficit to leader Truex.

Johnson held off Blaney to earn the Stage 2 win, just the third stage victory of his career and first of the 2020 season.

Following the break between Stage 1 and 2, most lead-lap cars did not pit and Logano remained in the lead on the restart on Lap 141.

Truex was penalized for a commitment line violation and had to restart the race from the rear of the field.

On Lap 165, Johnson got around Bowyer and moved into the second position, 1.4 seconds behind Logano.

With 70 laps remaining in the second stage, Johnson had cut Logano’s lead to under a second as Harvick moved into third.

On Lap 201, Johnson went to the inside of Logano through Turns 1 and 2 to take the lead for the first time in the race.

With 40 laps to go in the second stage, Blaney had moved up to second, nearly 2 seconds behind Johnson. Logano ran third.

Johnson maintained a 1.7-second lead over Blaney with 10 laps to go in the stage as Logano continued to run third.

Logano’s four fresh tires allowed him to go from third to first on a late restart and he held off Bowyer to take the Stage 1 win.

Johnson was third, Truex fourth and Wallace rounded out the top-five, thanks to a two-tire piot strategy.

Blaney started on the pole thanks to a random draw but Aric Almirola grabbed the lead on the restart.

On Lap 4, Austin Dillon had a tire go down and hit the Turn 2 wall which brought out the first caution. On the restart on Lap 13, Almirola remained the leader.

Logano got around Almirola on Lap 20 exiting Turn 4 to take the lead for the first time.

On Lap 36, Elliott made his way to the second position, 3.8 seconds behind Logano.

With 80 laps remaining in the stage, Logano maintained a more than 3-second lead over Elliott with Bowyer having moved up to third.

On Lap 61, NASCAR displayed a competition caution to allow teams to check tire wear. All the lead-lap cars elected to pit with Logano the first off pit road.

When the race restarted on Lap 69, Logano was followed by Elliott, Bowyer and DiBenedetto.

With 30 laps remaining in the first stage, Logano maintained about a 1 second lead over Bowyer as Kurt Busch moved into third.

Timmy Hill’s car stalled on pit road on Lap 112 to bring out another caution. All the lead-lap cars decided to pit with Bubba Wallace the first off pit road thanks to a two-tire pit stop.

On the restart on Lap 121, Corey LaJoie led the way after staying out followed by Wallace and Logano, who was the first car that took four new tires.

After a logjam on the restart, Logano powered back into the lead on the start of Lap 122.

Joey Gase had to start the race from the rear of the field and serve a pass-through penalty down pit road after taking the green after his No. 51 failed pre-race inspection five times. The No. 51 will also be assessed an L1 penalty later in the week.

NASCAR bans the display of Confederate flags at all tracks