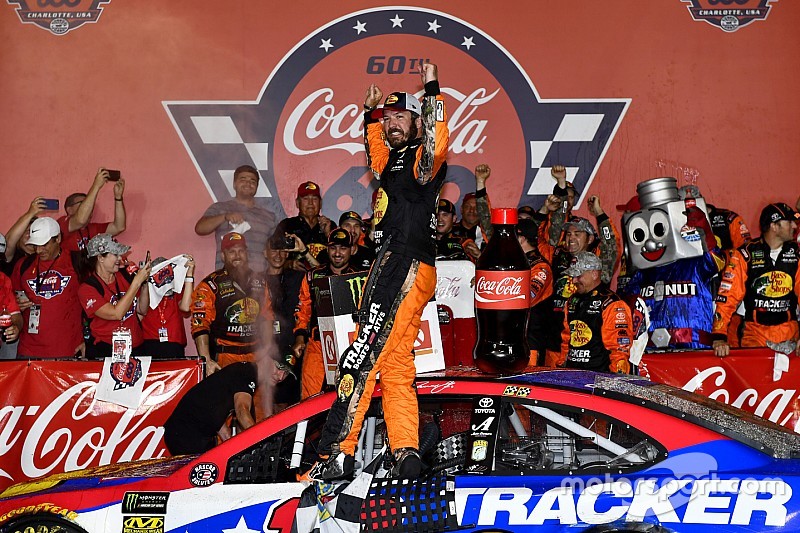 Martin Truex Jr. navigated a four-wide restart with five of 400 laps remaining to win the 60th running of the Coca-Cola 600 at Charlotte Motor Speedway.

Truex lined up third on a restart with five go and as the field moved off Turn 2, a four-wide battle erupted for the lead with Truex emerging with the lead.

It was an improbable conclusion to the race for Truex, who had brought out a caution early in the race after hitting the wall.

"That was just incredible - what a race," Truex said after exiting his No. 19 Toyota on the frontstretch. "This is for everybody who gave their life so we could be here doing this tonight.

"What a race there at the end. That was pretty wild."

Asked at what point he thought he had a car with which he could win, Truex deadpanned, "Before I hit the fence the first time. Before I blew a tire, I was like, 'This thing is unbelievable.' Then it was really tight and we freed it up and then it was too loose.

"I just thank Cole (Pearn, crew chief) and all the guys. We're gaining on it."

The win is the third of the 2019 Monster Energy NASCAR Cup Series for Truex – all in the last five races – and 22 of his career.

Following the break between Stages 3 and 4, all of the lead-lap cars elected to pit with Elliott the first off pit road.

On the restart on Lap 308, Elliott was followed by Truex, Kyle Busch, Ryan Blaney and Stenhouse.

Off Turn 4 on Lap 309, Kurt Busch wrecked and made contact with Kyle Busch which brought out a caution. Harvick also received some minor damage in the incident.

On the restart on Lap 315, Elliott remained in the lead, followed by Truex, Kyle Larson, Blaney and Logano.

Larson appeared to get loose after contact with Truex in Turn 2 on Lap 316 and triggered an accident that also collected Austin Dillon, Ty Dillon and Ryan Preece which brought out another caution.

“I got a bad restart and put myself back where I shouldn’t have been,” Larson said. “I just screwed up.”

Only a handful of cars elected to pit and on the restart on Lap 324, Elliott remained in the lead followed by Truex, Blaney, Logano and Bowman.

On Lap 343, Truex cleared Elliott after the two made slight contact to retake the lead.

With 45 laps to go, several drivers began a round of green flag pit stops, which would be their final stop needed for fuel.

Denny Hamlin hit the wall on Lap 358 and the debris on the track brought out a caution. All of the lead-lap cars pit, with Truex the first off pit road.

On the restart on Lap 366, Truex led the way followed by Elliott, Stenhouse, Blaney and Newman.

Logano, who had not been in contention most of the race, powered into the second position on Lap 368.

With 30 laps remaining, Truex held a small lead over Logano with Blaney in third and Kyle Busch had moved up to fourth.

With 10 laps to go, Keselowski spun off Turn 4 and down the entrance to pit road to bring out a caution. Just before his spin, Blaney had headed down pit road under green for a bad vibration.

Most of the lead-lap cars elected to pit but David Ragan stayed out and inherited the lead. Ryan Newman was the first off pit road thanks to a two-tire stop and lined up second.

On the restart on Lap 396, Truex lined up third, Kyle Busch fourth and Elliott fifth.

Kyle Larson: Backstretch pileup “was all me”