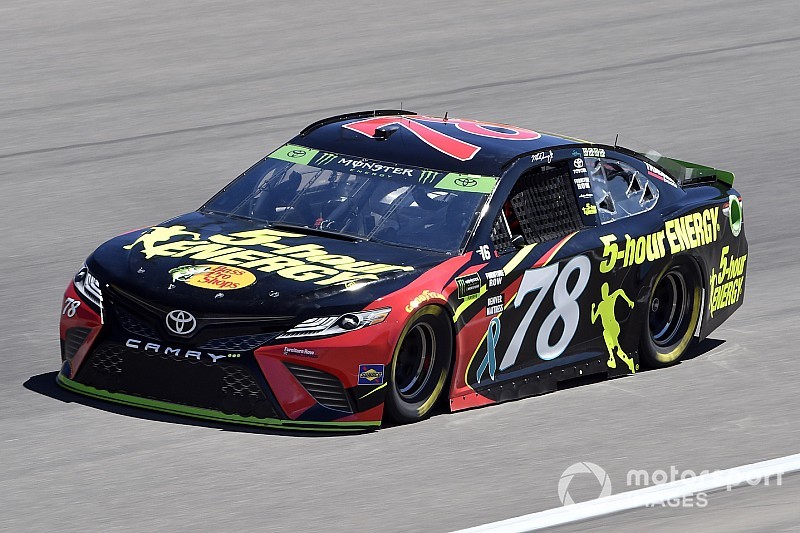 After passing Harvick with 20 of 80 laps remaining in the stage, Truex was able to edge Harvick by 0.309 seconds to win Stage 1 at Las Vegas Motor Speedway.

Logano, who started second, grabbed the lead from Jones at the start and quickly built up a sizeable lead over Kyle Busch.

With 55 laps remaining in the first stage, Busch had closed to within five car-lengths of Logano as Harvick moved up to third.

On Lap 33, Harvick got around Busch and began working on Logano for the lead.

One lap later, Harvick easily made his way around Logano to take the lead for the first time. Kyle Busch also was able to pass Logano and made his way into the second position.

A round of green-flag pit stops began on Lap 35. Once the cycle was completed, Harvick returned to the race lead on Lap 51. He was followed by Truex, Kurt Busch and Logano.

During the stops, Trevor Bayne was penalized by NASCAR for speeding on pit road. Michael McDowell also received a speeding penalty while making his stop.

With 20 laps left in the first stage, Truex powered to the outside off Harvick off Turn 4 to take the lead for the first time in the race.

“Just no rear grip,” Harvick said over his team radio.

With 10 laps to go in the stage, Truex held a more than 1.5-second lead over Harvick, followed by Kurt Busch.

Also, Kyle Larson was forced to make a green-flag pit stop for an issue with his right-front tire. When he returned to the track, he was in 27th and one lap down.

With two laps to go, Bowman got around Kurt Busch to claim the third position.

B.J. McLeod had to start the race from the rear of the field due to a rear gear change. Austin Dillon also had to start from the back after his team was penalized before the race for making an unapproved body modification.