It’s such a cool link to my fans and I really didn’t want to give it up,

“I felt naked,” he laughed. “I was locked out of my own account. I’d built my followers up and was scared I was going to lose all of it to this guy. I was mad at him, mad at myself, and really ticked off.”

Some quick work on a Saturday afternoon by Twitter and MWR restored Martin’s account to full functionality, and by late Saturday night Martin was back to tweeting about rap music, his schedule and answering fan questions.

“It’s such a cool link to my fans and I really didn’t want to give it up, so I’m thrilled I got it back. You see those commercials about people getting hacked and you really don't think much of it, but when it happens to you it’s big. Real big.”

Martin’s weekend dramatically improved on Sunday. He watched Brian Vickers drive the No. 55 to a fifth-place finish and Michael Waltrip Racing sweep three of the top-five spots in the Bristol race. All three MWR cars are in the top eight in owner points.

“I couldn’t have been happier for Brian and (crew chief) Rodney (Childers) and all those guys on the No. 55,” Martin said. “What you saw Michael Waltrip Racing do Sunday is just the tip of the iceberg, and I can’t wait to see how good we can get as this season rolls on.” 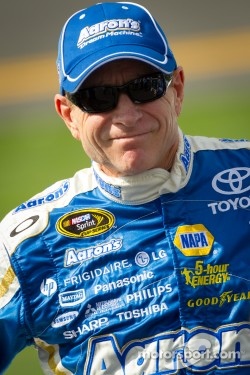 Martin returns to the driver’s seat on Sunday at Auto Club Speedway in Fontana, Calif. where he’ll have a special surprise for his Twitter hacker.

“Epic Swag stole my name last Saturday so this weekend I’m stealing his. We’ll run Epic Swag above the driver’s window where my name is usually. What do they say: ‘turnabout is fair play.’ ’’

“Mark Martin has done a great job and Brian Vickers had a great day at Bristol, so this weekend we're trying out Epic Swag in the Aaron’s Dream Machine,” Waltrip said. “Some people call him a hack, but I'm willing to give him a second chance."

· ALL MWR CARS IN TOP 8 IN 2012: Martin Truex Jr. is fourth and Clint Bowyer eighth in driver points while the No. 55 (Martin & Vickers) is fifth in owner points.

Kurt Busch will remain sidelined for the final two races of the regular season as he continues his recovery.

NASCAR is back road racing for the penultimate round of the 2022 NASCAR Cup Series regular season.