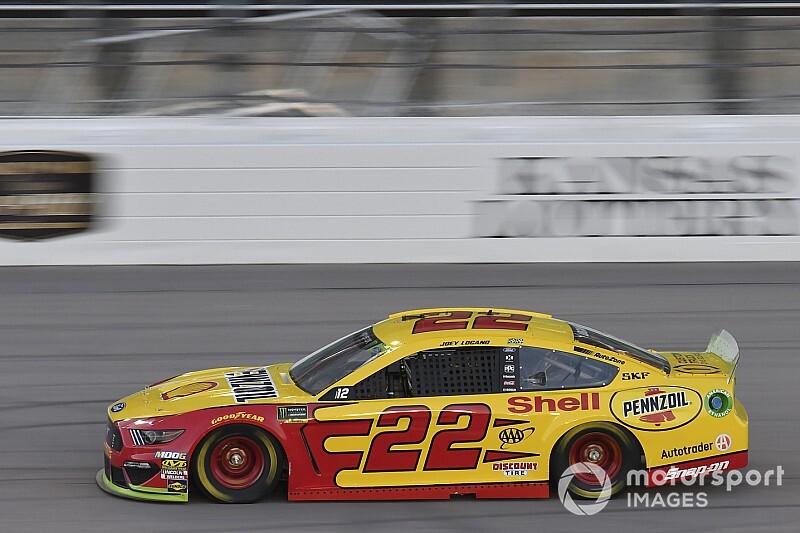 Joey Logano rallied from two laps down to become the surprise winner of Stage 1 at Kansas Speedway.

After pitting under green early in the stage for a loose wheel, Logano rallied back to the lead lap then grabbed the lead with one of 80 laps remaining in the stage in a five-wide move on the backstretch.

Daniel Hemric, who started on the pole, led the first five laps before Ryan Blaney got around him to take the top spot for the first time in the race.

Kyle Larson and Brad Keselowski then traded the lead twice over the next four laps until Larson emerged with a solid advantage on Lap 9.

After 15 laps, Larson maintained about a half-second lead over Keselowski with Suarez having moved up to third.

After contact with the wall, Alex Bowman had dropped to 22nd in the running order on Lap 21 with his No. 88 Hendrick Motorsports team needing caution in order to make repairs.

On Lap 24, Logano reported a “bit of a vibration.”

With 50 laps remaining in the first stage, Kevin Harvick – who started last – had moved into the top-20 and Byron had gotten around Hemric for 10th.

Logano pit under green on Lap 33 to address the vibration on his No. 22 Ford. He returned to the track in 34th and two laps down. His team reported the car had a loose wheel.

After 40 laps, several teams began making a green-flag pit stop for tires and fuel to make it to the finish of the stage.

Once the round of stops was completed on Lap 59, Larson cycled back to the lead. He was followed by Suarez, Kyle Busch, Elliott and Truex.

With 10 laps to go in the stage, Larson held about a 1.5-second lead over Kyle Busch with Suarez having dropped to third.

NASCAR put out the caution on Lap 75 for debris in Turn 4 shortly after Ryan Newman made contact with Roush Fenway Racing teammate Ricky Stenhouse Jr., which sent Newman into the outside wall.

Many of the lead-lap cars elected to pit but Blaney was among those who stayed out and took over the race lead.

On the restart with two laps to go in the stage, Blaney was followed Bowyer, Logano, Stenhouse and Kyle Busch (who was the first driver to pit).

The No. 51 Ford of J.J. Yeley had to start the race from the rear of the field due to unapproved adjustments.