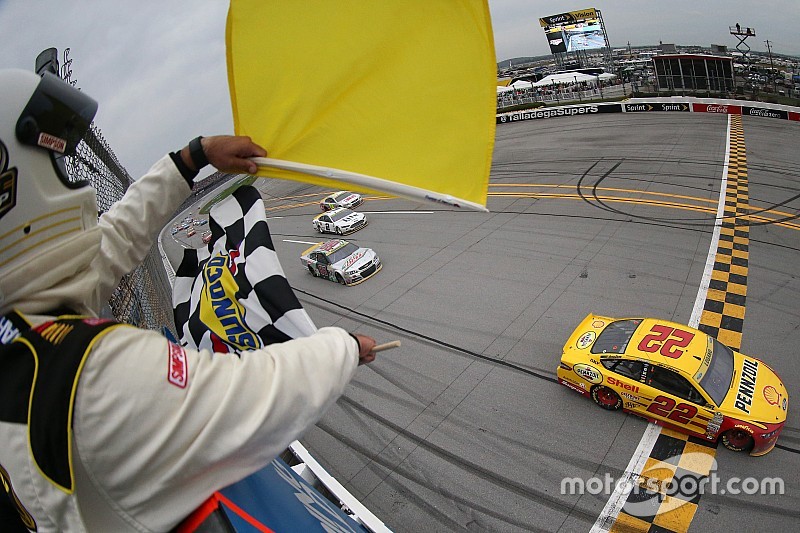 It was a complete sweep for Joey Logano in the Contender Round.

The Team Penske driver won his first victory at Talladega Superspeedway on Sunday — and his sixth race in 2015.

“It is amazing,” said Logano following his 14th career Cup win. “Dreams come true I guess. We have to keep this dream rolling. We have a long way to go.

“We are back to zero going into Martinsville so we need to make something happen in the next three races.”

Everybody is going to ask me a hundred times how I feel about the green-white-checkered rule now. I feel good about it. It was a good safe call ... We did everything we could today. Almost perfect, tried really hard.

Logano inherited the lead from Greg Biffle, who was forced to pit on Lap 189 after the race was extended when Jamie McMurray’s car blew up six laps earlier. NASCAR attempted to restart the race on Lap 190, however, Jimmie Johnson was bumped by Martin Truex Jr. from behind and took out Kyle Larson to extend the caution.

NASCAR’s Mike Helton said since the cars were “out of kilter” before crossing the start-finish line, the restart was called off.

When NASCAR officially restarted the race on Lap 194, Logano and Dale Earnhardt Jr. led the field to the green with their teammates Jeff Gordon and Brad Keselowski in tow. Four rows behind the leader, Kevin Harvick, who was running 10th, fell off the pace and careened into the Trevor Bayne which ignited the yellow flag during the final attempt to complete the race with Logano in the lead.

(Harvick) knew he wasn't going to make it unless a wreck happened.

Earnhardt Jr., Gordon, Keselowski and Carl Edwards rounded out the top-five finishers in the CampingWorld.com 500.

And the fans at Talladega showed their disgust by showering Logano with beer cans and assorted bottles during his victory lap.

“They had an accident and needed to throw the yellow, so it was dangerous to keep... Everybody is going to ask me a hundred times how I feel about the green-white-checkered rule now. I feel good about it. It was a good safe call. The race ended per the rules and I'm totally okay with that. They decided officially who won the race and Joey won it. He has had an awesome round. Unbelievable really.  We did everything we could today. Almost perfect, tried really hard."

Harvick struggled to get up to speed in the closing laps of the race.

"We weren't running very well there at the end on restarts and we were just trying to get out of the way,” Harvick said. “I don't know if I clipped the No. 6 or if he came across as I was coming up.

“Just one of those days where everything went wrong until the very end when the bottom fell out those last couple of restarts when it cooled off. It has a broken exhaust pipe or something."

Denny Hamlin, who was wrecked in that final melee and dropped from second in the point standings prior to the race to 10th after finishing 37th (unofficially), claimed that Harvick “knew he wasn't going to make it unless a wreck happened.”

“Procedurally from NASCAR, we don’t see anything that is of suspect so far,” vice chairman Mike Helton said of Harvick’s move on the final restart. “The only thing I mean about ‘so far’ is I’ve been around long enough to know that something could crawl out of the woodwork in the next 24 hours.”

There were 30 lead changes over 196 laps. The race was slowed by three cautions for 18 laps.